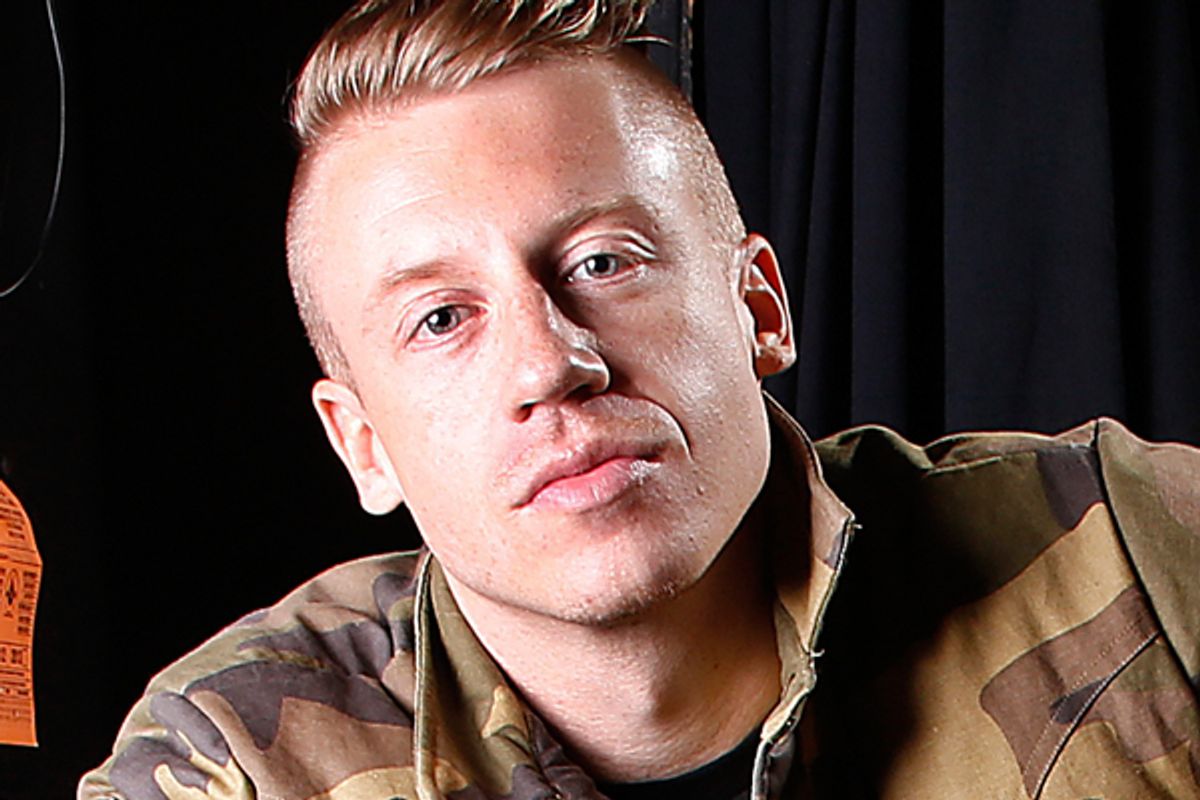 “If I was gay, I would think hip-hop hates me. Have you read the YouTube comments lately? ‘Man, that’s gay’ gets dropped on the daily,” rapper Macklemore says on his stridently pro-gay “Same Love” that’s been blowing up in the music and LGBT blogosphere. The song and its video, which intersplices footage of 1960s civil rights demonstrations and the tender love story of two men from birth to awkward adolescence to marriage to old age, has almost 9 million views.

Macklemore, aka Ben Haggerty, a white Seattle native with a hipster disposition, may not be the most archetypical rapper, but the success of his song speaks for itself. And it comes at a time when hip-hop is undergoing a sea change on how it deals with homosexuality, especially in light of Frank Ocean’s pathbreaking revelation of his own bisexuality this summer.

The genre has been criticized since its inception for its homophobia and sexism, with its emphasis on aggressive masculinity and liberal use of the other f-word, and there was a time when it would be almost impossible to imagine a successful gay hip-hop artist. And yet, Ocean, who is reportedly dating a French male model, earned six Grammy nominations last night, including in three of the four most prestigious spots. His excellent album, "Channel Orange," has sold 390,000 copies. And to top it off, Vibe named him its man of the year today.

“Almost every synopsis of Frank, the 24-year-old singer-songwriter who’s either gay or bisexual, fixates on his ambiguity," Vibe’s Clover Hope writes. “No other entertainer sparked a more vital dialogue this year than Frank. His same-sex revelation gave Black music a belated progressive push while enticing more (deserved) interest in Channel Orange.”

Macklemore, who is not gay, says he was inspired to write his song by the stubborn homophobia in his genre. “I watched so many records receiving critical acclaim that were very derogatory to homosexuals. That and misogyny are still kind of the two very acceptable means of oppression in terms of hip-hop culture. And it’s 2012. There needs to be some accountability. As a society, we are evolving and I think that hip-hop has always been a reflection of what’s going on in the world,” he told Studio 360’s Kurt Andersen this weekend.

“Same Love” is a delightful and uplifting track with its piano, horns and poppy hook (sung by Mary Lambert), but it’s so didactic that it can come off a bit preachy. There’s no subtlety in its message or lyrics, which are delivered deliberately and crystal clearly, like a political manifesto set to music. But maybe that’s needed when embarking in new territory, like how 1965’s bluntly political “Eve of Destruction,” one of the first of the decade's protest songs to find major commercial success, perhaps paved the way for more refined political songs to follow.

And Macklemore, along with producer Ryan Lewis, had a clear political goal — getting Washington's marriage-equality referendum passed. The end of the song, which received more views on YouTube than there are residents in the Evergreen State, urges viewers to “APPROVE REF 74.” Haggerty told Andersen he takes some credit for the referendum's success:  “It made some people vote -- I don’t want to take too much for it.”

While there’s no doubt been some hate thrown at Ocean and Macklemore, their experiences have proven that, if anything, their outspokenness on the issue has been a boon for them and their careers. Ocean would be a star regardless, but his coming out generated interest and attention that he otherwise might not have received. Macklemore might not be known as widely outside Seattle were it not for the national press he’s gotten in light of the song.

It’s easy to see a parallel with President Obama’s coming out for marriage equality earlier this year. All the fear about a backlash proved moot, and if anything his “evolution” on the issue likely helped him more than it hurt him come Election Day. And Obama seemed to bring a chunk of the black community with him, which should only make it easier for gay hip -hop artists in the future.

"[The support for Frank is] an extension of the overall kind of support we’re seeing across the country for LGBT people, and not just in a broad sense, but specifically from iconic members of the black community," GLAAD’s Daryl Hannah told the AP, citing Obama and hip-hop elder statesman Jay-Z as those leading the change.

And there are more LGBT hip-hop artists ready for their break into the mainstream. Details profiled seven of them in October, who are “as different from one another as Kanye and Lil Wayne,” but have one thing in common -- unlike Ocean, who was already successful before he came out, “they're all about as far from the down-low as possible.” Maybe that’s how it can be for every LGBT rapper in the future.