From shirtless pics to graphic come-ons, sites are calling out dating profiles for a laugh -- and commiseration 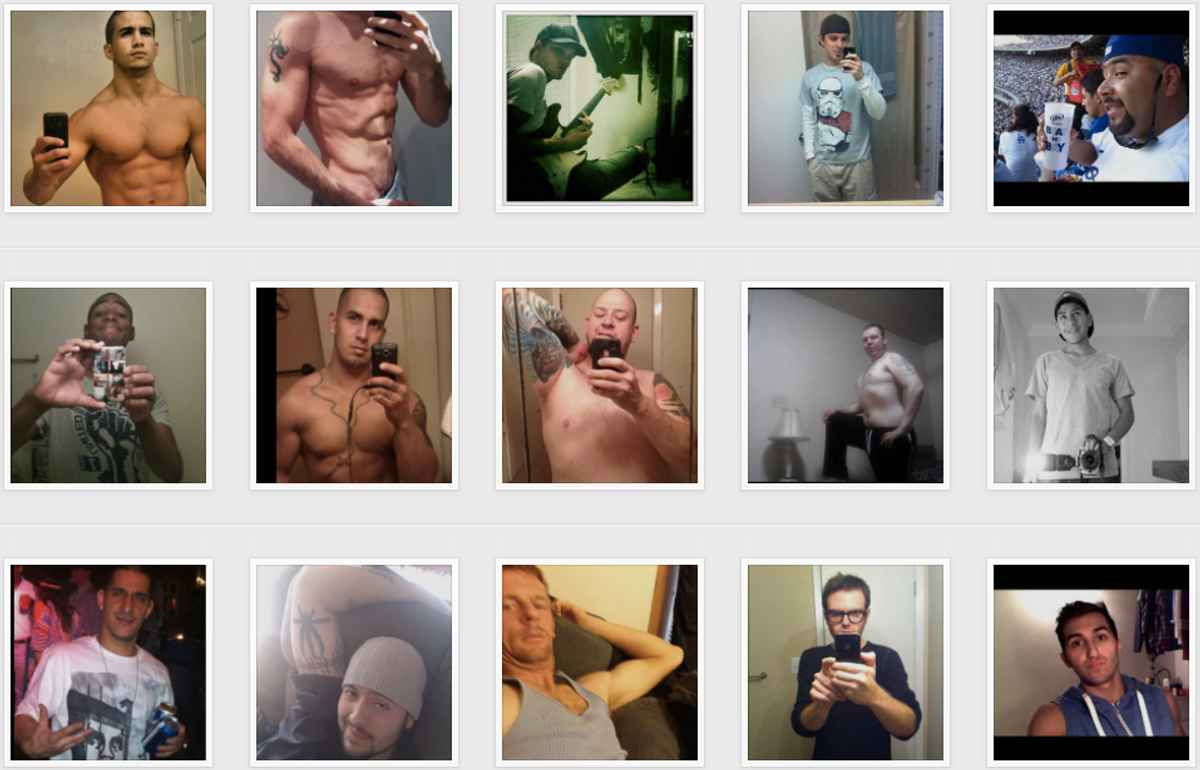 There's an overabundance of men flexing their abs while taking selfies in the bathroom mirror. Worse are the guys lifting their shirts, Situation-style, or hoisting up their strained biceps. It's a cornucopia of Weiner-esque chest-shaving and torso-gazing, and it is intended for our comedic entertainment.

The shots are found on the Instagram account Antidates, which carries the explanatory tag line, "actual responses to dating ads. they never had a chance." It's one of several sites that have popped up with the express purpose of making fun of tactless online daters -- and the vast majority happen to be men attempting to court women. (This is no doubt in large part because men are more often the initiators on online dating sites, and there is something inherently awkward about initiating contact with a person you've only met virtually.) It isn't just absurd self-portraits -- most of the sites focus on outrageous come-ons, off-putting self-descriptions and horrific misspellings.

The site description for A(n)nals of Online Dating explains its raison d'être: "It’s a simple idea: Online dating is the worst. Submit the horrific messages you get, and we will collectively laugh at them." Each post is given literal points "for lack of basic spelling and punctuation skills; bad sexual innuendo; reliance on cliche; terrible taste in books, music or movies; use of twelve-year-old-girl text-slang; and creep factor." For example, a message that starts with the opener, "You kinda remind me of a girl I dated a long time ago. She was really screwed up," gets the dubious distinction of a whopping 25 points.

My first introduction to sites like these came through my friend Anna Pulley, a writer and creator of It's Not OK, OkCupid. She launched the Tumblr after being inundated with gems like this one, "you pretty hair color, would love to feel it with my lips." Ooh and this: "I talked to my therapist yesterday about my obsessive urge to sexually dominate and abuse women and we’re working on it together, so that’s not something you need to worry about. So whattaya say, wanna chill some time?" Even more straightforward come-ons can miss the mark: The site Online Dating Is Terrifying shares this message from a virtual Romeo, "I think you’re attractive, and if you feel the same way towards me, it’s possible that you might be open to my proposition: to have sex with each other."

Sometimes, all that's necessary is a photo, as with this post on Why They're Single of a self-portrait from a "single" man's dating profile, which clearly shows his wedding ring.

These sites abound -- from Itsnotamatch.com to Abadcaseofthedates.com. And that's not to mention "bad date" photo essays, like this one on BuzzFeed, headlined, "26 Completely Unexplainable Dating Site Pictures" (including a creepy-looking fellow along with a screenshot of his answer to the OkCupid profile prompt, "I spend a lot of time thinking about ...": "women shooting").

Why the trend of shaming uncouth online daters? Pulley tells me in an email, "Because online dating is so difficult, we look to mockery to try to make sense of things, and to console ourselves that a) we're not the only ones getting these crazy messages, and b) we may be single but at least we're not dating 'those' people." Plus, we're all pretty uncool when it comes to online dating, and making fun of the worst among us can make the rest of us feel a touch suave.