The year TV broke out in song 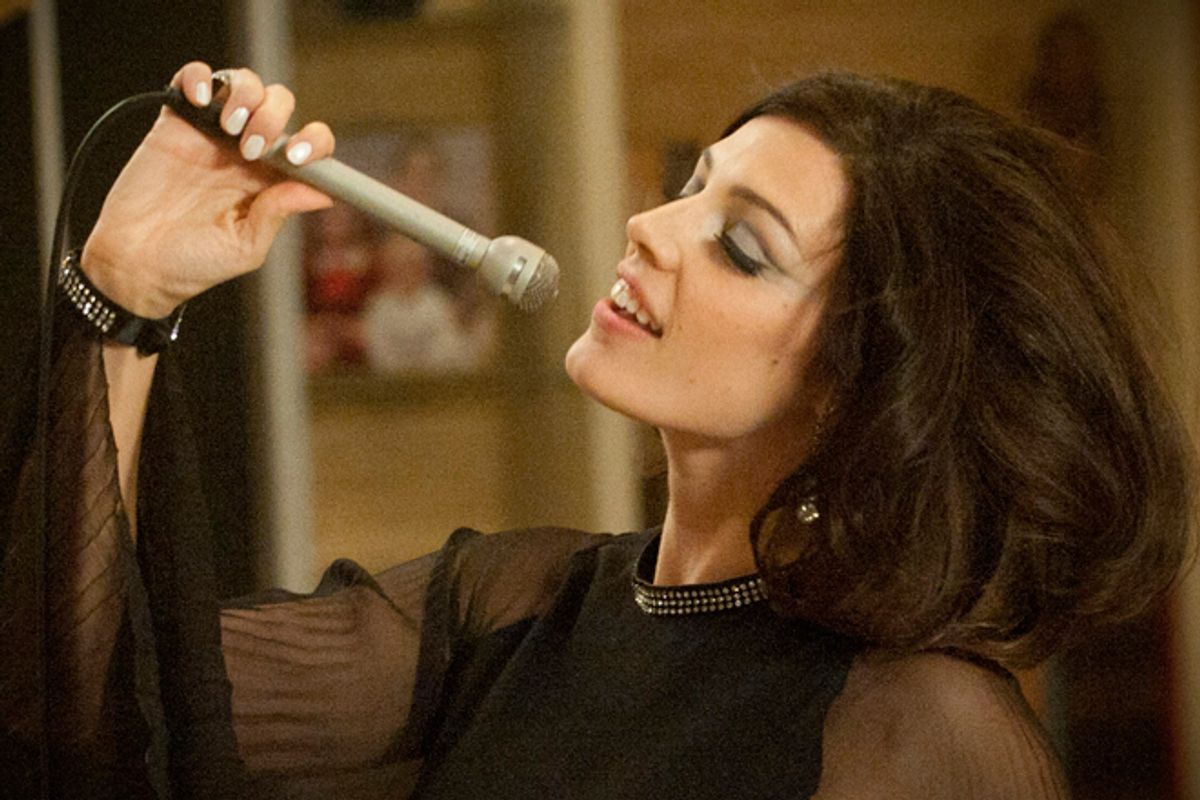 “Nashville” finished up the first part of its season last night with Juliette Barnes dominating a church, Gunnar and Scarlett selling a song, and Rayna Jaymes hesitating to go on tour with her younger rival. (Do it already!) In just eight episodes, “Nashville” has delivered some of the best musical moments on scripted TV this year. So on the occasion of its winter recess — and, also on the occasion of "Suburgatory's" homage to Rebecca Black last night — here is some of the year’s best singing and dancing, from “Mad Men's" "Zou Bisou Bisou” scene to "Happy Endings," with Adam Pally wearing a giant crucifix earring, and of course, because it's a show about a Broadway musical, we have to include a little number from that crazy show called "Smash."

“Nashville” has been full of great music, but it’s the duets that have been mesmerizing, more effectively distilling and tracking the characters’ changing emotions than any dialogue. The three best: the first episode’s “If I Didn’t Know Better,” which presaged the inevitable Gunnar-Scarlett puppy-dog love story; the Deacon-Rayna duet “No One Will Ever Love You,” a bit of singing that’s emotionally tantamount to adultery; and Rayna and Juliette’s how-could-I-really-hate-you-when-singing-with-you-is-so-much-fun peace treaty, “Wrong Song.”

The most memorable moment from the last season of “Mad Men” came in the very first episode, when Megan publicly serenaded new husband Don Draper with this French little number, originally made famous by Gillian Hills. It’s amazing television that I can still hardly bear to watch.

Even as over “Glee” as I am (and I am way, way, like to the sixth moon of Saturn over "Glee"), Darren Criss’ acoustic, heartbroken reprise of Katy Perry’s “Teenage Dream,” a song he once sang to much happier effect, put a little motion in my tear ducts.

When Louis C.K. hosted “SNL,” the comedian worked with the sketch show to make a “Louie” spoof, "Lincoln," in which Abraham Lincoln was imagined as an awkward guy very much like Louis C.K. The whole send-up is pitch perfect, but the credit sequence, in which “Louie’s” theme song becomes “Lincoln, Lincoln, Lincoln, Lincoln-eeee,” is the best.

For sheer strangeness (and amount of dialogue), no show this year matched the wily, weird, wonderful “Bunheads.” As evidence, please see these two dance sequences, dreamed up because creator Amy Sherman-Palladino just felt like having them in there. One’s a teenage girls' “angry dance” set to “Istanbul (Not Constantinople).” The other is a ballet about recycling.

“Smash’s” first season was an (immensely enjoyable) disaster, but the fault was not with the songs, especially not the ones created for the Marilyn musical within the show. (The wan pop numbers performed by Katharine McPhee are, however, partially to blame.) Two great examples: the incessantly performed but very effective “Let Me Be Your Star,” and the first episode’s “National Pastime," which demonstrated early on just how well "Smash" could ape a real musical number (when it wasn't doing something inexplicably mediocre instead).

12. From "Treme": Every musical moment

It's impossible to pick just a handful of standout musical moments from the David Simon series. Just watch it all.

Bonus: I like to think of this scene from Leslie Knope's City Council campaign in last season's "Parks & Recreation" as a choreographed dance sequence. I'll always have a place in my heart for Gloria Estefan's "Get Off Your Feet," now.