Our TV critic debuts a new Friday column, with her pithiest takeaways on the best shows of the week 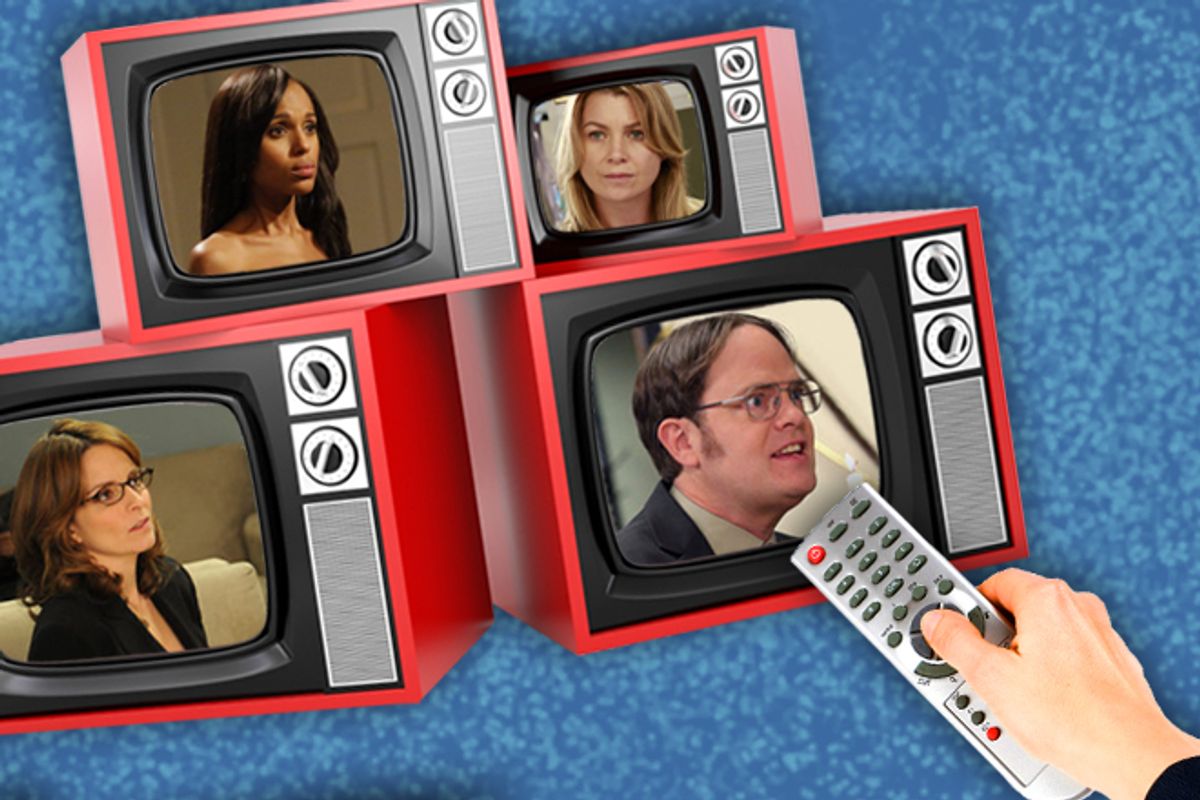 My observations of the past week of TV: Too short to stand on their own and too long to keep to myself.

1. When Steve Carell left "The Office," it sent the show into a frenzy to crown the “next boss.” Determining said boss was the major theme of last season, and the reason there were guest-starring roles for Will Arnett, James Spader, Ray Romano, as well as longer story arcs for Catherine Tate and James Spader as the mellow perveball Robert California. But after all that fuss, there is currently no boss in “The Office” at all — Andy Bernard (Ed Helms) is on a long vacation to the Caribbean and has been MIA for weeks — and it’s ... totally fine. The show’s in much better shape than it was during the doldrums of last year, and the huge supporting cast has more to do. In hindsight, "The Office" would have been better served ignoring, rather than trying to fill, Carell’s shoes.

2. I just want to take a moment to appreciate, again, how much Tina Fey has improved as an actress since “30 Rock” started. In this, she is the anti-Seinfeld, a super-funny creative genius whose acting skills could have been propped up by an amazing supporting cast for her seminal show's whole run, but instead of just sitting back and never improving her "I am always credulous or always about to burst out laughing" face, she just got really, really good. As evidence, please see, her imitating various mid-Atlantic, Katharine Hepburn-ish accents on last night's episode.

3. An update on the craziest show on television: Last night on “Scandal” the president got shot, leading to a series of flashbacks in which — among other things — the president and “Scandal’s” heroine, Olivia Pope, had sex on the desk in the Oval Office. “Scandal” is trying to single-handedly bring sexy back to White House affairs, after Monica Lewinsky made them all about sordid human stains. Also during last night's flashbacks, Olivia told the president that she was feeling very “Sally Hemings–Thomas Jefferson” about their relationship, that he was everywhere, that she was consumed by him, that he “owned her” (emotionally). He passionately objected to her throwing the “race card” on his love for her, and then convinced her to stay with him because he felt as though she “owned” him too.

4.  Gaius Charles, who played Smash Williams on “Friday Night Lights” and is currently playing a surgical resident on “Grey’s Anatomy,” joins the ranks of “FNL” actors who — based on current evidence — will never be as good as they were on "FNL." (See also: Aimee Teegarden, Zach Gilford, Minka Kelly, Taylor Kitsch.) With its particular shooting style — a roving, constantly filming camera — and great writing, “Friday Night Lights” was an actor’s paradise, making even mediocre actors seem really good (and great actors seem like the best human people in the whole universe. Ahem, Mr. and Mrs. Coach.) On “Grey’s” Charles is overplaying everything and smiling so much it actually hurts my cheeks to watch him do it.