Don't hate me because I'm beautiful

Tired of being bullied for her killer abs, Britton Delizia is fighting back -- with bullying of her own 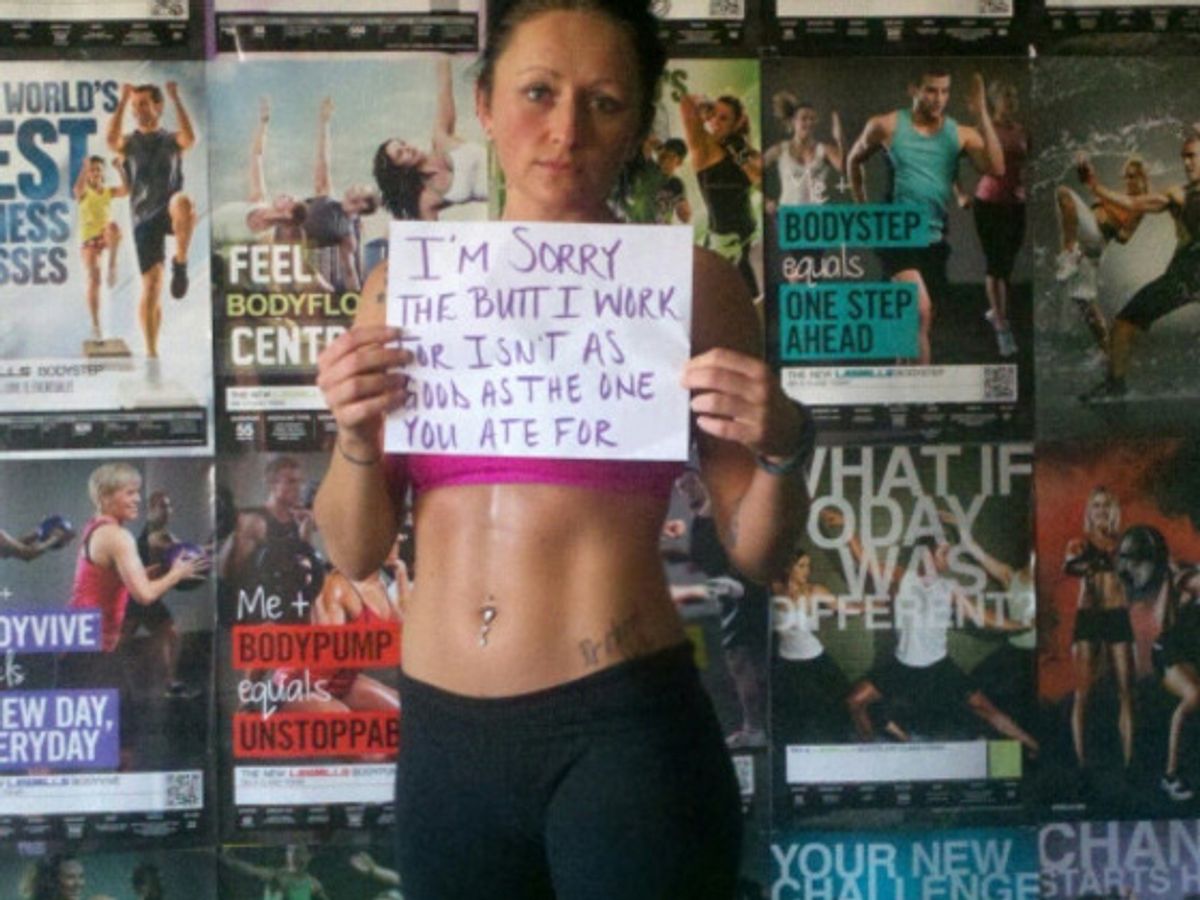 It is hard to be a woman in this country! We still earn, on average, 25 percent less than our male colleagues. We still do most of the housework and child-raising. Elected officials still think it is OK to make personal medical choices for us, while others ascribe supernatural powers to our lady parts. Life is complicated all over. So when Britton Delizia says that she has been bullied because she is naturally skinny and has killer abs, why not believe her? And when she launches a Kickstarter to fund a photography book that celebrates "fitness" and "healthy living"? Sure, feel free.

But what could have been a chance to talk honestly about how our appearance-obsessed culture makes almost all women insecure (even ones with killer abs!) turns pretty quickly into bullying and fat-shaming. Delizia's would-be book features women holding handwritten signs that say things like, "I'm sorry that the butt I worked for isn't as good as the one you ate for." It's the same photo device used by Planned Parenthood in its "I Stand With Planned Parenthood" campaign earlier this year, only instead of supporting an essential women's health organization it's ... picking on people with insufficiently toned butts.

It's entirely possible that Delizia feels discriminated against because of the way she looks. Maybe people are mean to her because they think she's pretty. Insecurity manifests in all kinds of unhealthy, unhappy ways. Plus, we've all seen that episode of "30 Rock," right? This is real stuff. But her claim of a full-on cultural bias against thin people is dubious, to say the least.

Its undeniable that when we stand a skinny, athletic or even average sized female next to a larger (even if less healthy, overweight or obese) female, that unless we live outside of this stigma, we as Americans will assume that the heavier person is funnier, smarter, nicer, and less sexually promiscuous, all because she is not as thin or physically fit than the girl next to her.

It would be easy to dismiss Delizia as a narcissist in need of some serious self-awareness (though she probably is), but she is also a symptom of a larger, troubling tendency in our culture. One that encourages us to see differences -- whether it's BMI ratio, country of origin, sexuality or class -- as a threat. It's the same reason men like Rick Santorum believe that gay marriage is an affront to straight marriage. It's the same reason women like Jan Brewer think teaching ethnic studies in high school classrooms is anti-American. It's a losers game.

So perhaps it's best to ignore Britton Delizia. If you want to read a thoughtful take on beauty and female insecurity, look no further than Tavi Gevinson. At 16, Tavi managed to express all of the fraught and complicated ways one can feel complicit in a culture that makes women hate themselves. She didn't shame anyone in the process, either.

As for the Santorums and the Brewers? If only making them go away was as simple as not funding a Kickstarter.