"Glee" and "The New Normal" rely on scene chewers. So why are the best episodes the ones when they're not there? 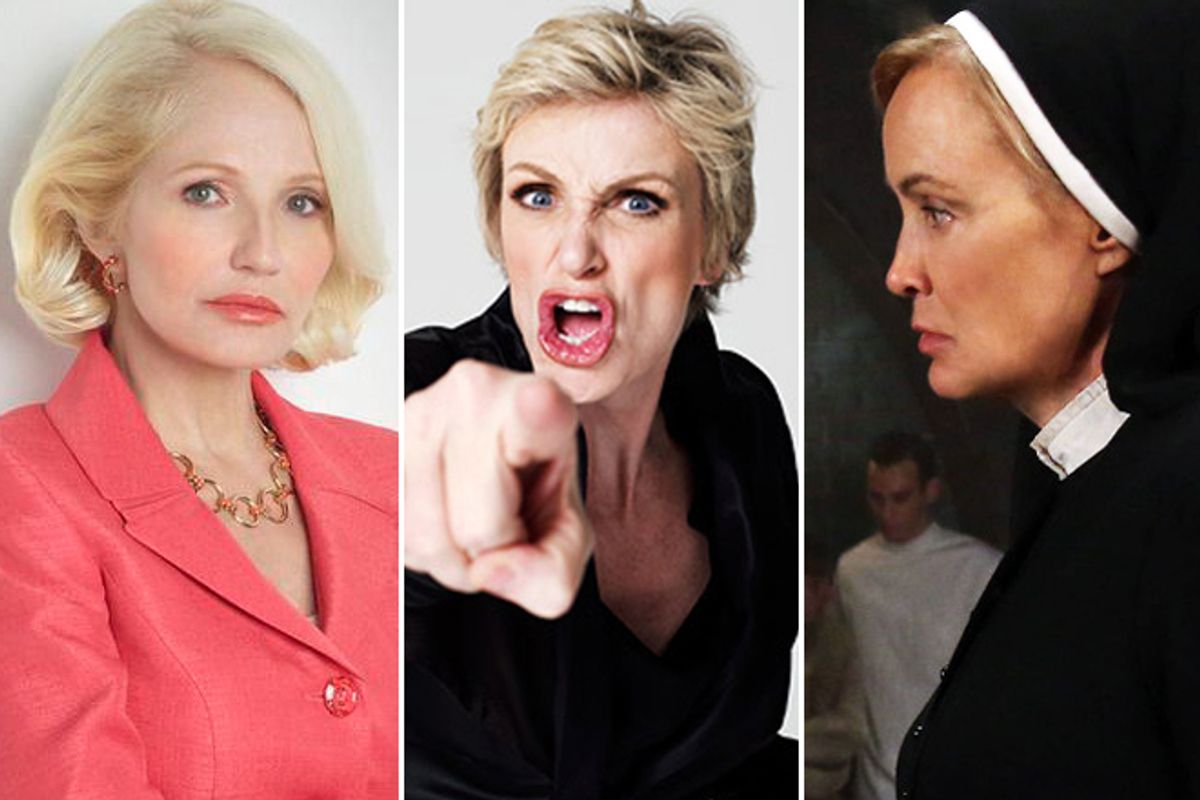 During the days I was writing for AOL TV, one of the toughest shows I've ever had the "pleasure" of recapping was the second season of "Glee." It was so wildly inconsistent and favored showmanship over story. But during the ninth episode of the season, in an episode called "Special Education," I was noticing that the "Glee" I enjoyed during its first season was back: stories about the kids and their relationships, a plotline I could really pay attention to, and just enough music to keep the Gleeks happy. It wasn't until about two-thirds of the way through the episode that I noticed something: There was no sign of Sue Sylvester (Jane Lynch).

Last week, I was watching another of executive producer Ryan Murphy's shows, "The New Normal." In this particular episode, gay couple Bryan (Andrew Rannells) and David (Justin Bartha) found out the gender of the baby that was growing in the belly of their surrogate, Goldie (Georgia King). It was sweet and funny, with the level of story, character development and the usual flourishes Murphy imbues on all of his shows.

About two-thirds of the way through the episode, a similar feeling came over me: I was enjoying the episode much more than the previous ones, and I wasn't quite sure why. Then it hit me: Ellen Barkin's hateful, vengeful, racist character of Jane Forrest was nowhere to be found.

It's a strange occurrence that seems to happen during all of his series. I don't feel completely exhausted at the end of a particular episode, having spent 22 minutes (on a network sitcom) or an hour (on cable, with his horror drama, "American Horror Story") navigating the waters of Murphy's hyperactively quirky characters and situations. Another favorite episode of "Normal,"about Bryan and David's decision over who their baby's godmother should be, was, as it happens, also Jane-free. We've seen this on "Glee," too: It's always a relief when we're spared Jane Lynch's evil gym teacher Sue Sylvester's wrath on the New Directions or her Cheerios.

Anyone who is a fan of Murphy's shows knows that he likes his scene chewers: Barkin, Lynch and "American Horror Story's" Jessica Lange have all gotten attention — and in the case of the latter two, awards — for their over-the-top, scene-stealing characters. But in Barkin's and Lynch's cases, these characters wear out their welcomes quickly.

Barkin's "New Normal" character Jane is Goldie's overprotective grandmother and the "Nana" of Goldie's precocious daughter Shania (Bebe Wood). She's a proud Midwestern Republican who thought Mitt Romney was the country's savior and that the entire state of California should be "wrapped in a condom." Her reason for being there is to ensure the safety of her granddaughter and great-granddaughter in the care of the gay couple who have enlisted Goldie to bear their child. And, as a plot device, to ruffle their feathers. Because she's sickened by the fact that she has to interact with Bryan and David on a semi-regular basis, reacting nastily and impulsively with incendiary, homophobic, emasculating insults. She also hurls racist comments at Nene Leakes' character, Rocky, that would have gotten her slapped on "The Real Housewives of Atlanta," Leakes' other show.

Jane has also decided to disrupt the lives of everyone around her in ways that outside the world of television would get her arrested. At the very least, it would have gotten her shunned by her friends and family. In one episode, she takes 9-year-old Shania and one of her classmates to Planned Parenthood to get birth control after they're caught kissing in the coatroom of their class. In another, she persuades Goldie's cheating dope of a husband, Clay (Jayson Blair), to come out to California  to try to win Goldie back and take her away from the godforsaken situation she's gotten herself in.

Every time Jane pulls one of her stunts, you want to see someone — Goldie, even little Shania — tell her off and cast her back to Ohio. And they do yell at her, tell her how nasty she is. But then it's over, and she comes roaring back, worse than ever, because that's just the way Murphy likes it: extreme behavior with little or no consequences. Very rarely do we get to the heart of what motivates her rage, and by the time we do get some rationale, my face is sore from all the eye-rolling I've been doing.

Fans of "Glee" recognize this pattern, because they've seen Lynch's character, Sue, go from fan favorite to plot burden before the show's second season was even half over. Her unfettered and unexplained hatred of the New Directions has sent her in Snidely Whiplash-like directions that just don't make sense. During the show's first two seasons, she tried to sabotage the glee club so many times, one wondered how she had time to manage the Cheerios and, you know, teach gym class.

But her behavior in general has been so reprehensible that she would have been fired from her job dozens of times over. It was one thing for Sue to scream at students, throw things at them and dress up like the Grinch and steal the Christmas presents they collected for the less fortunate. But when she ordered poor, confused Cheerio Brittany (Heather Morris) to become a human cannonball during the show's second season post–Super Bowl episode, my faith that the character would reform was lost.

No matter what she does, though, even when she's called on it by Will Schuester (Matthew Morrison), usually Principal Figgins (Iqbal Theba) sighs, throws up his hands, makes some sort of excuse as to why he can't do more than rebuke her, and sends her on her way. Only a few times has Sue gotten her comeuppance, and she's roared back stronger and meaner in each instance.

Every time we thought that Lynch was able to take control of Sue and give her something resembling human emotions — following the death of her sister with Down syndrome, or when her heart was broken by Cooter Menkins (Eric Bruskotter) — she'd return to being insufferable a week later. And, as we get halfway through the show's fourth year, Sue continues to rage. The absence of Lynch has become more frequent and just as welcome as when Murphy decided to skip over her during portions of the second season.

What makes characters like Sue and Jane so hard to take is that Murphy's worlds are pretty frenetic to begin with: Everyone is precocious and quippy, and plot and character consistency sometimes take a back seat when Murphy and his creative partners hit on a funny situation for their characters to swim in for an episode. For Sue and Jane to stand out so much, they have to be even more outrageous, even more frenetic than the people around them, which can be exhausting during a 22-episode season.

They become even more insufferable when the worlds of "Glee" and "The New Normal" enjoy more down-to-earth arcs, as we know that Murphy and his writers are capable of giving us real characters facing real stakes. So even though "Normal's" Bebe can have an elaborate kiddie wedding or "Glee's" Rachel (Lea Michele) and Kurt (Chris Colfer) can break out into song in the middle of New York and no one notices, there are still real consequences to their actions, and they suffer greatly if they make a wrong turn. Sue and Jane don't usually suffer those consequences; if they do, it's usually a slap on the wrist compared to the offenses they've committed.

This grounding in reality is why Jessica Lange's two characters from both seasons of "American Horror Story " are the exceptions that prove the rule. Sure, Lange left bite marks all over the sets of the first "AHS" season, playing the sinister and obsessed next-door neighbor Constance Langdon, who verbally abused her developmentally disabled daughter and was happy that her lineage created a murderous antichrist of a child. And in the second season, "Asylum," her abusive, alcoholic Sister Jude Martin runs roughshod over Briarcliff mental hospital spewing a Massachusetts accent that most people in the state have likely never uttered.

But "AHS" is a world where ghosts haunt "murder houses," people are terrorized by sexual deviants in rubber suits, Nazi doctors torture patients, and a guy named Bloody Face lurks around, skinning his victims and wearing their faces as a mask.

Reality has taken a holiday in "AHS," which makes Lange's over-the-top characterizations fit in better. She's no crazier than everyone else on that show; she's just better at conveying her brand of crazy. I just wish the crazy of Sue Sylvester and Jane Forrest matched the worlds they were in, as well.