"Restless": Charlotte Rampling is armed and dangerous and bewitching

This miniseries is a mashup of two thrillers too moody to be enthralling, but Rampling is riveting to watch 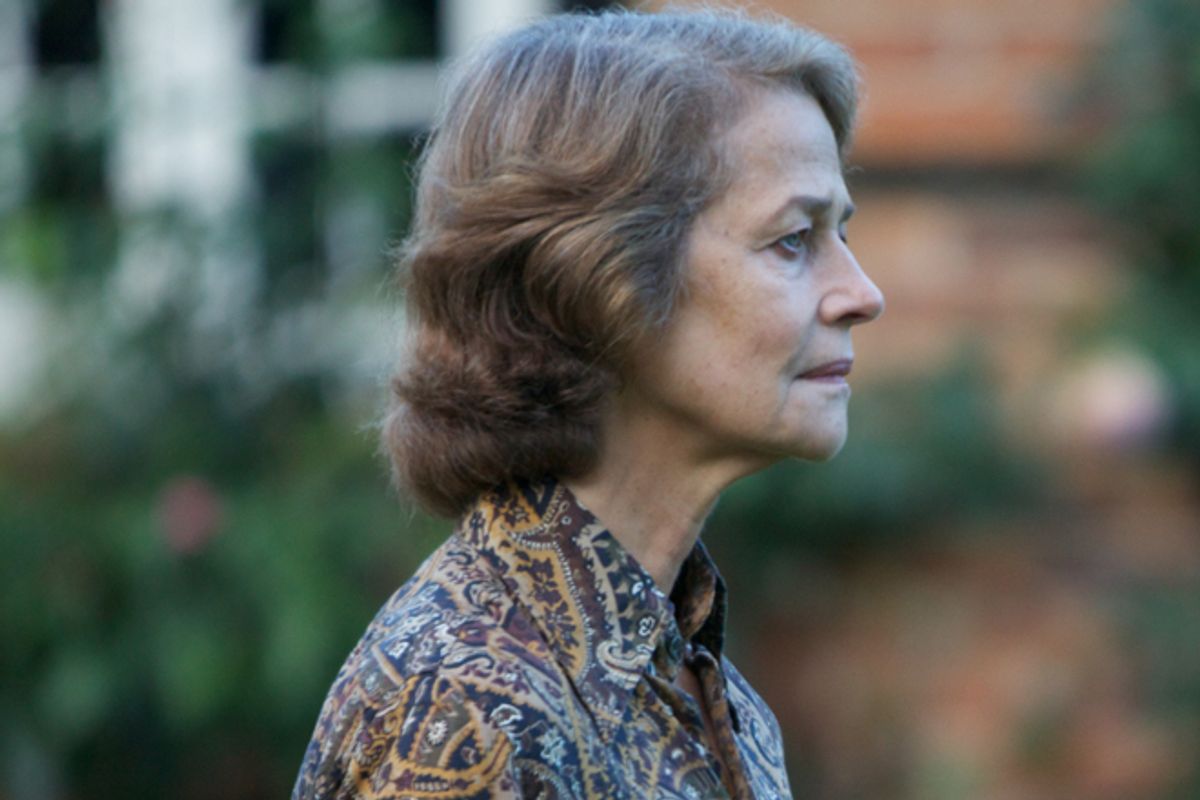 I’m not exactly sure who a foxy Russian expat-turned-accomplished-and-then-betrayed WWII-era British spy grows up to be, but a Charlotte Rampling type seems like a very good guess. Rampling, who is now 66, is exactly the right mix of scared and scary, vulnerable and fierce, controlled and yet seemingly seconds away from insanity that suggests a woman who will always and forever know 836 ways to tie up a person and take his or her secrets. The casting of Rampling in the two-part miniseries “Restless,” in which she plays exactly the character described above — Eva Gilmartin nee Delectorskaya, a former British spy — is the only great thing about “Restless,” which premieres tonight on the Sundance Channel. But sometimes seeing Charlotte Rampling holding an outsize firearm like she intends to use it is good enough.

Based on a novel of the same name by William Boyd, “Restless” jumps back and forth in time. In the 1970s, Eva Delectorskaya as played by Rampling is imperiously, intensely concerned that she is under surveillance and about to come to harm. Looking for a way to outsmart her enemies, Eva unburdens herself to her daughter Ruth (“Downton Abbey’s” Michelle Dockery, now in a period costume of hippie blue jeans and peasant blouses). As Ruth learns of Eva’s past as a spy — a past she has heretofore known nothing about — she becomes embroiled in her mother’s scheme to get whoever is harassing her to back off, forever. Meanwhile, as Ruth learns about Eva, we are taken back in time to the late 1930s and early 1940s, when a younger Eva (Hayley Atwell, “Brideshead Revisited,” “Captain America”) is recruited by the dashing Lucas Romer (Rufus Sewell), trained and sent to the United States in the months before Pearl Harbor, where an entire British espionage operation is trying to get America to enter the war ASAP.

Atwell has a very open and cheeky likability, a characteristically British pluckiness, and cute-to-adorable good looks, all of which are totally estimable qualities except when one is trying to play a young Charlotte Rampling. Rampling, a commanding and intimidating figure with a way Euro aura of mysteriousness and a slashing, unignorable beauty and sex appeal, is basically Atwell’s opposite.

Thus “Restless” feels like it is two half-movies smashed into one not quite whole movie. The Rampling-Dockery portion of “Restless” is a weak John LeCarre-styled picture. There’s politics and plotting and the unnecessary appearance of a German involved with the Baader-Meinhof Gang, but not that much violence or heavy action, or even heavy emotion. Following Rampling’s lead, everyone in this half of “Restless” plays their feelings way, way tamped down. It's a mood piece, not a thriller. Meanwhile, the Atwell-Sewell portion of "Restless" plays more like a standard spy caper, with honey-pot plots and trips through the Southwest that go wildly wrong (and keep referencing “Touch of Evil”). But even with the action, this portion of the film drags: “Restless" is a total of four hours, but it feels much longer.

When “Restless” finished meting out some closure for Eva, I was left wanting a whole other movie, one that traced the transformation of Atwell’s Eva, at the end of WWII, into Rampling’s in the '70s. Because that would have to be one crazy story.