Why did Shakira feel the need to share an image of her uterus with the Twitter-verse? 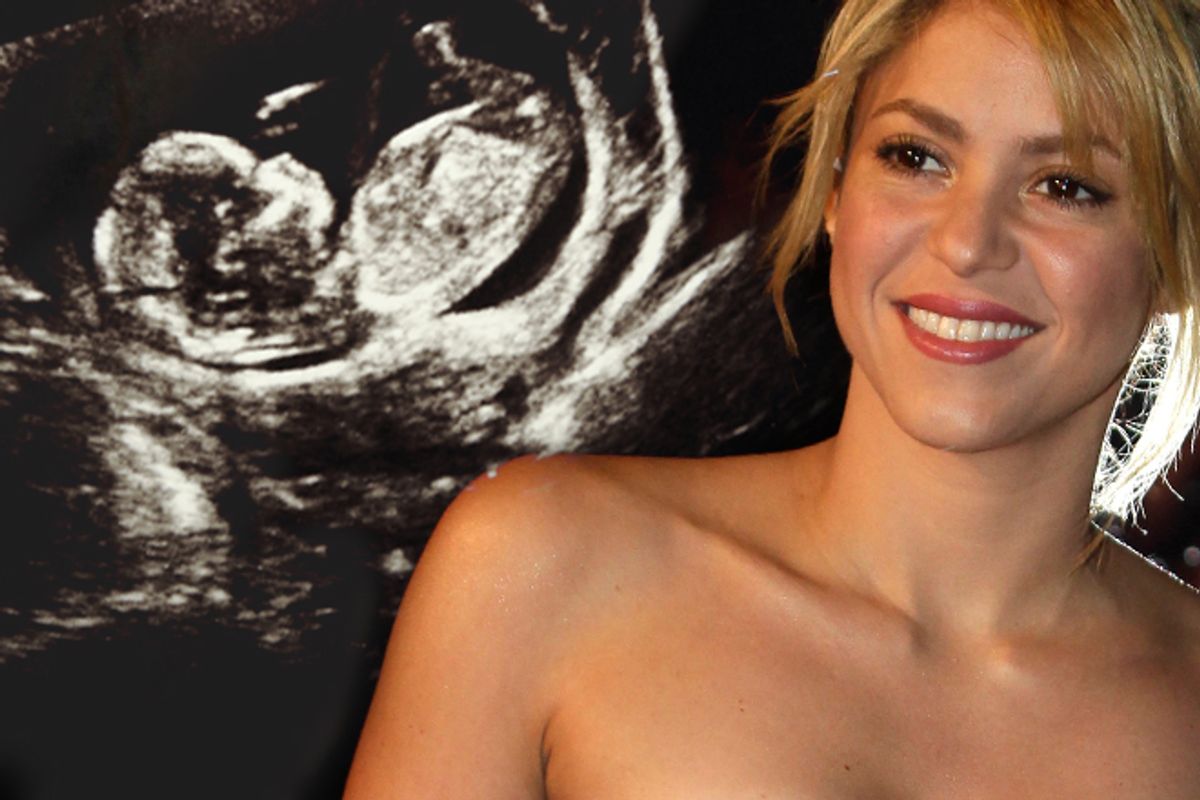 Call me old-fashioned, but I just don't want to see what's going on inside Shakira's uterus. The 35-year-old Colombian singer, famed for her guileless coxal region, is currently expecting her first child in the new year with her boyfriend, Spanish footballer Gerard Piqué. As is now mandatory for all celebrity mothers-to-be, she has already announced the baby's sex (It's a boy!) and posted a photo of herself smiling and showing off her round, bare belly. But on Thursday, she jumped on the latest de rigueur trend in social networking through pregnancy: disseminating the ultrasound photo.

It started with Piqué posting the image on his WhoSay account, with the caption "His first pic! #excited #cute." I'm not the dad, but it looks ... like an ultrasound. Shakira promptly retweeted it, and before the day was out you couldn't go online without seeing the black-and-white profile of Shakira's fetus and the random womb blobs surrounding him, accompanied by a headline about the "first ultrasound photo." That has a portentous ring of more to come, doesn't it? Parents, is this really going to be a thing with you from now on?

Whether it's an international pop star or just that person you went to high school with spreading the news on Instagram, the ultrasound pic has become part of the increasingly detailed, publicly shared experience of baby-making. I know that life is amazing and whatnot, but here's a thought: Not every internal miracle needs to be distributed to the world. And while I share in the joy of every prospective parent, I'd like to mention that as the wise STFU, Parents blog once explained, ultrasound pictures are kind of terrifying. Look, I love my beautiful daughters and have kept the images from both their ultrasounds, but the truth is that after that initial moment of "Awww, my baby has a face," my next thought was always, "And it's the face of a goat demon." If your Facebook profile pic right now is of your baby's sonogram, I'm sure you're getting a lot of congratulations and I also promise that you are scaring people.

But the main reason that a widely shared ultrasound photo triggers such a sinking feeling in the pit of my being is that it represents the promise of a child's life that's relentlessly documented before the kid even breaks out of the amniotic sac. Somewhere in the process of what I have no doubt is the legitimate anticipation and happiness of starting a family, it's just really easy to turn it into one big exercise in oversharing. To believe that everyone is entitled to, nay eager to, see the fascinating chronicle of what's unique and special to us. But our children, our babies and even our unborn babies have a right to not become a constant source of fodder for our social media streams, just as our friends and followers have a right to not be deluged with the minutiae of our odyssey through breeding. And frankly, if there's one location in the universe an individual ought to be entitled to a little privacy, it's inside his mom's uterus.