The most important fiscal cliff issue no one is talking about: Payroll taxes

Democrats need to fight for the payroll tax cut holiday, and hammer Republicans on it 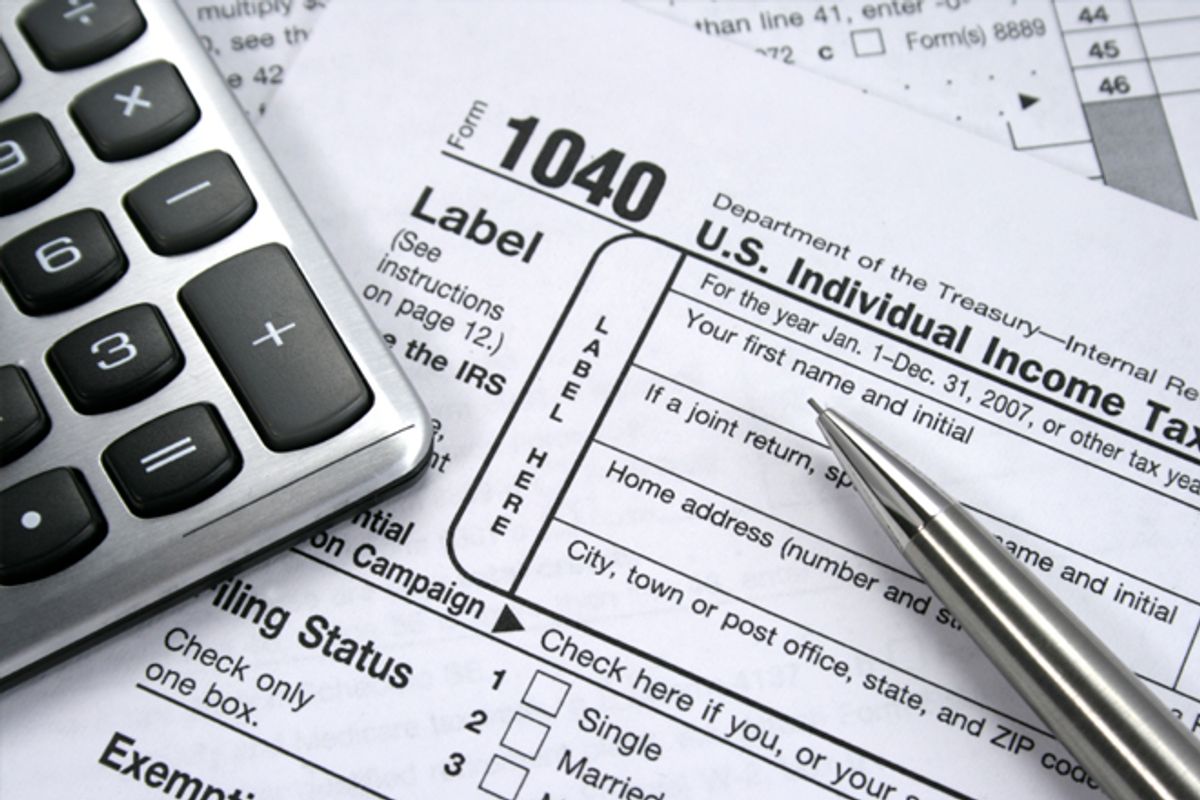 You’d be forgiven for thinking that the fiscal cliff is all about what happens to the tax rate for the richest 2 percent of Americans, given the focus on the Bush cuts, but there’s another tax cut set to expire at the end of the year that will hurt far more people and very few people seem to care. And Democrats are committing political malpractice by not taking up the issue and bludgeoning Republicans with it every day.

The payroll tax holiday gives every single American who collects a paycheck a tax cut, $1,500 a year on average, and is one of the best ways to stimulate the economy. But it looks like Congress will let it expire on Dec. 31, even if they reach a deal on the Bush tax cuts.

First, some background. The holiday, which was created in late 2010 after a similar tax credit in President Obama’s stimulus package expired, cuts by 2 percent workers’ payroll tax bill, the tax that funds Social Security. The standard rate is 6.2 percent, but the temporary holiday dropped that to 4.2 percent, which works out to somewhere between a $400 cut for someone making $20,000 a year up to a $2,000 cut for someone making over $100,000.

But unlike the Bush tax cuts for the wealthy, which are a terrible way to boost the economy, payroll tax cuts are one of the most efficient stimuli because they disproportionately impact lower income workers, who need the money and are thus more likely to spend it immediately. Rich people, on the other hand, are less sensitive to subtle changes in their income and more likely to save any unexpected windfall instead of spend it.

The chief economist of Goldman Sachs warned that letting the payroll tax rates go back up would shave off more than half a percent of GDP growth next year, effectively canceling out the benefits of a third round of the Fed’s controversial quantitative easing operation. Other analysts said the effect could be a full percentage point off GDP.  Moody's Analytics economist Mark Zandi, who has advised politicians of both parties, estimates that the payroll tax holiday delievers almost double the bang for the buck as the Bush tax cuts for highest income earners. An August 2011 report from Moody's estimated that every $1 in payroll tax cuts adds $1.27 to the GDP. And economists from the Economic Policy Institute say letting the payroll tax holiday expire would kill more jobs than letting all the Bush tax cuts expire. “[D]espite all the attention paid to the high-income Bush tax cuts, the payroll tax cut is a much better value as economic stimulus,” the Center on Budget and Policy Priorities notes. Businesses are also worried that the holiday's demise will drive down demand for their products.

So what’s the problem? The payroll tax holiday has the funny effect of flipping the traditional partisan orientation on its head, with Democrats supporting the tax cut and Republicans opposing it. Why would Republicans, a party with an almost theological devotion to tax cuts, suddenly object to one?

Critics argue it’s because the payroll tax disproportionately benefits the working poor and middle class, and gives a relatively smaller benefit to the wealthy. Social Security taxes are capped at just over $100,000, meaning that any income over that amount doesn’t get taxed at all. So when you cut the tax rate, people who make under $100,000 get a cut on all their income, while those making more than the cap only get it on part. Thus, the richer you are, the less you benefit proportionately from the payroll tax holiday.

The last times the payroll tax cut came up in Congress, at the end of 2011, Republicans insisted that the cost of the holiday be offset with spending cuts so as not to swell the deficit. Curiously, they never made the same demand about the Bush tax cuts, which were never offset. Instead, they erroneously claimed the Bush tax cuts for the wealthy pay for themselves. And while touting the alleged economic boon the Bush tax cuts deliver, Republicans denied the benefit of the payroll tax cut. Rep. Paul Ryan dismissed the holiday as “sugar high economics,” for instance, while others simply denied there could be any benefit from the cuts at all.

Not surprisingly, simultaneously insisting on extending tax cuts for the rich while opposing tax cuts for the middle class turned out to be a political mistake for Republicans a year ago. The Wall Street Journal editorial board excoriated the GOP for the payroll tax “fiasco,” writing, “Republicans have also achieved the small miracle of letting Mr. Obama position himself as an election-year tax cutter.”

Which makes it all the more surprising that Democrats haven’t taken up the issue this time around, given that it is both good policy and very good politics. “I don’t see any reason to consider supporting its extension,” Treasury Secretary Tim Geithner said of the payroll tax holiday while testifying before the Senate in September. President Obama included the holiday in his fiscal cliff proposal to Republicans last week, but many observers think he included it for tactical reasons -- so he could barter it away down the road.

Other than that, it's hardly come up during discussion about the fiscal cliff. Democrats on the Hill have so far not made much movement on the issue either. And it might not matter if they did, since they’ve now been excluded from negotiations, which are continuing between only Obama and House Speaker John Boehner.

There is one legitimate liberal concern about the tax holiday: how it will impact Social Security. The payroll tax funds the Social Security Trust Fund, so cutting the tax depletes the fund. Over the past two years, the fund has been supplemented with general funds to make up for the lost revenue, but it could be a problem in the long term. But as long as the holiday remains temporary, until the economy recovers, experts say the Trust Fund should be OK. Today's jobs report was good, but not good enough, and the economy clearly still needs the help, so it's not time to end the holiday.

Even the conservative Weekly Standard is baffled that “both parties seem oddly complacent about the return of higher payroll-tax rates -- which would hit far more Americans, and especially middle-class families” than the expiration of the Bush tax cuts. The magazine’s James Capretta and Yuval Levin argue today that Republicans should outflank Democrats on the issue to show they care about the middle class.

Democrats would be wise to not let that happen.