Don't buy their bunk about "pro-growth tax reform." These corporate pirates would shipwreck the U.S. economy 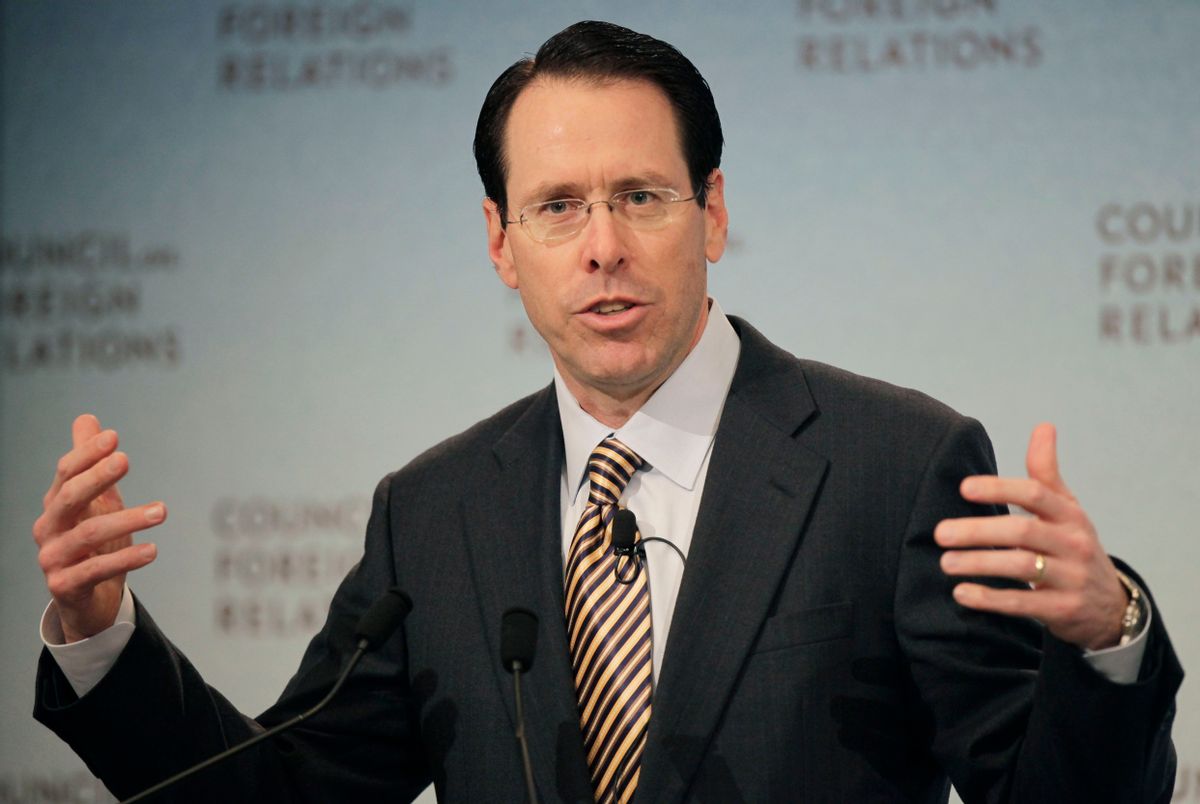 In poll after poll, the American people say they are far more concerned about the jobs crisis than the “debt crisis.” A powerful coalition of CEOs says they have an answer for both problems.

Give us more tax breaks, they say, and we’ll use the money to invest and create jobs. The national economic pie will expand and Uncle Sam will get plenty of the frothy meringue without having to raise tax rates.

That’s the line of the Fix the Debt campaign. Led by more than 90 CEOs, this turbo-charged PR/lobbying machine is blasting the message that such “pro-growth tax reform” should be a pillar of any deficit deal (along with cuts to benefit programs like Social Security and Medicare).

And it might be a good line — if not for some pesky real-world facts. You see the same corporations peddling this line have already been paying next to nothing in taxes. And instead of creating jobs, they’ve been destroying them. Here are five examples of job-cutting, tax-dodging CEOs who are leading Fix the Debt.

Randall Stephenson presides over the biggest job destroyer among the Fix the Debt corporate supporters, having eliminated 54,000 jobs since 2007. The company also has one of the largest deficits in its worker pension fund — a gaping hole of $10 billion.

Can Stephenson blame all this belt-tightening on the Tax Man? Not exactly. Over the last three years, AT&T’s tax bills have been miniscule. According to the firm’s own financial reports, they’ve paid Uncle Sam only 6.3 percent on more than $43 billion in profits. If the telecom giant had paid the standard 35 percent corporate tax rate over the last three years, the federal deficit would be $12.5 billion lower.

So where have AT&T’s profits gone? A huge chunk has landed in Stephenson’s own pension fund. His $47 million AT&T retirement account is the third-largest among Fix the Debt CEOs. If converted to an annuity when he hits age 65, it would net him a retirement check of more than a quarter million dollars every month for the rest of his life.

While his economic future is more than secure, Stephenson emerged from a meeting with President Obama on November 28 “optimistic” about the chances of reforming (i.e., cutting) Social Security as part of a deal to avoid the so-called “fiscal cliff.”

Another telecommunications giant, Verizon, is close behind AT&T in the layoff leader race, with 30,000 job cuts since 2007. Like its industry peer AT&T, Verizon also has a big deficit in its pension accounts. It would need to cough up $6 billion to meet its promised pension benefits to employees and another $24 billion to meet promised post-retirement health care benefits.

Did the blood-sucking IRS leave Verizon no choice but to slash jobs and underfund worker pensions? Far from it. The company actually got money back from Uncle Sam, despite reporting $34 billion in U.S. profits over the last three years. If Verizon had paid the full corporate tax rate of 35 percent, last year’s national deficit would have been $13.1 billion less. Had that amount been used for public education, it could have covered the cost of employing more than 190,000 elementary teachers for a year.

Verizon’s new CEO, Lowell McAdam, already has $8.7 million in Verizon pension assets, enough to set him up for a $47,834 monthly retirement check. McAdam’s predecessor, Ivan Seidenberg, who has also signed up as a Fix the Debt supporter, retired with more than $70 million in his Verizon retirement package.

Honeywell has created 10,000 new jobs since 2007 – outside the United States. At home, the firm has eliminated 4,000 jobs. In July, Honeywell announced it was closing a Metropolis, Illinois plant, laying off 230 workers, and sellinganother Illinois property, Sensata Technologies, to Bain Capital, Mitt Romney’s old private equity firm. Bain, another Fix the Debt supporter, immediately announced it was closing the 175-worker plant and shipping the jobs to China.

Are Honeywell’s U.S. job losses the result of Uncle Sam strangling all the life out of the company? Hardly. Over the last three years, the firm has been highly profitable each year, with total U.S. profits of $2.5 billion. And yet Honeywell used deductions, credits, and loopholes to garner refunds totaling $377 million over the last three years – an effective tax rate of negative 14.8 percent. If Honeywell had paid the full 35 percent corporate tax since 2009, the U.S. deficit would have been reduced by $1.3 billion.

Honeywell is not only near the front of the IRS refund line, it is also among the top recipients of government contracts. In 2011, the firm got $725 million in government deals, making it the 35th-largest federal contractor. Tax refunds go in one pocket, while taxpayer-financed government contracts go in the other.

Still, Honeywell’s nearly tax-free status hasn’t kept CEO Cote from being one of the most outspoken advocates for more corporate tax cuts. One of his favorite proposals is a shift to a territorial tax system, which would permanently exempt all foreign earnings of U.S. corporations from U.S. income taxes. Cote was one of 12 big company CEOs who met with President Obama on November 14 to plead for this tax break. Honeywell has more than $8 billion stashed offshore and could receive an immediate tax windfall of more than $2 billion if Congress approved this shift to a “territorial” tax system. According to an Institute for Policy Studies report, Fix the Debt corporations as a whole would stand to gain $134 billion.

Perhaps even more galling is Cote’s demand for cuts to earned benefit programs. Cote has $78 million in his Honeywell retirement accounts, enough to qualify for monthly retirement checks of $428,000 starting at age 65. In contrast the average retiree receives just $1,237 a month from Social Security.

In 2009, Merck merged with Schering Plough to become the world’s second-largest pharmaceutical company. Less than a year later, Merck slashed 15 percent of its workforce, including closing facilities in Miami Lakes, Florida and Cambridge, Massachusetts. All told, between 2007 and 2011, Merck destroyed nearly 25,000 jobs, including at least 13,000 in the United States.

Merck’s radical downsizing has little to do with burdensome taxes. Between 2009 and 2011, the drug giant paid just 13.2 percent of its $9 billion of U.S. income in federal corporate income taxes. If Merck had paid the full 35 percent rate over the three-year period, the U.S. debt would have been reduced by nearly $2 billion, enough to pay for college scholarships for more than 250,000 students. But that’s not a low enough tax rate for Merck. As a part of Fix the Debt, CEO Kenneth Frazier is telling Congress the prescription to restore the U.S. economy should include a permanent corporate tax holiday for offshore earnings. If Congress fills that prescription, Merck could receive a $15 billion windfall on the $44 billion it has stashed offshore.

Though Macy’s sales have rebounded from their recessionary slump, the department store owner’s workforce is still down by 7,000 compared to 2007. Meanwhile, Macy’s CEO Terry Lundgren has seen his pay more than double over the period, from $8.7 million in 2007 to $17.6 million last year. Macy’s has also showered Lundgren with generous retirement benefits, currently worth more than $16.7 million. Over the last three years, Macy’s has taken advantage of various tax credits and deductions to lower its federal income tax rate to 20.7 percent. Lundgren also attended the November 28 meeting with President Obama, where Fix the Debt CEOs pushed cuts to Social Security and Medicare.

The five companies profiled here have contributed enormously to the national debt by eliminating livelihoods — together they’ve destroyed 108,000 jobs since 2007 — and through tax-dodging. If they had simply been required to pay the full statutory corporate tax rate of 35 percent, they would’ve paid $48 billion in additional federal income taxes over the last three years. And now these CEOs expect us to fall for their argument that even more tax breaks will be good for American workers.

There is an entitlement problem at the center of the debt debate — it is the entitlement of CEOs with track records of job destruction and tax dodging lecturing the rest of us on how to fix the debt.