Behold the onslaught of Hobbit action figures. Hobbit Legos. Hobbit meals. If only they did this to "Anna Karenina" 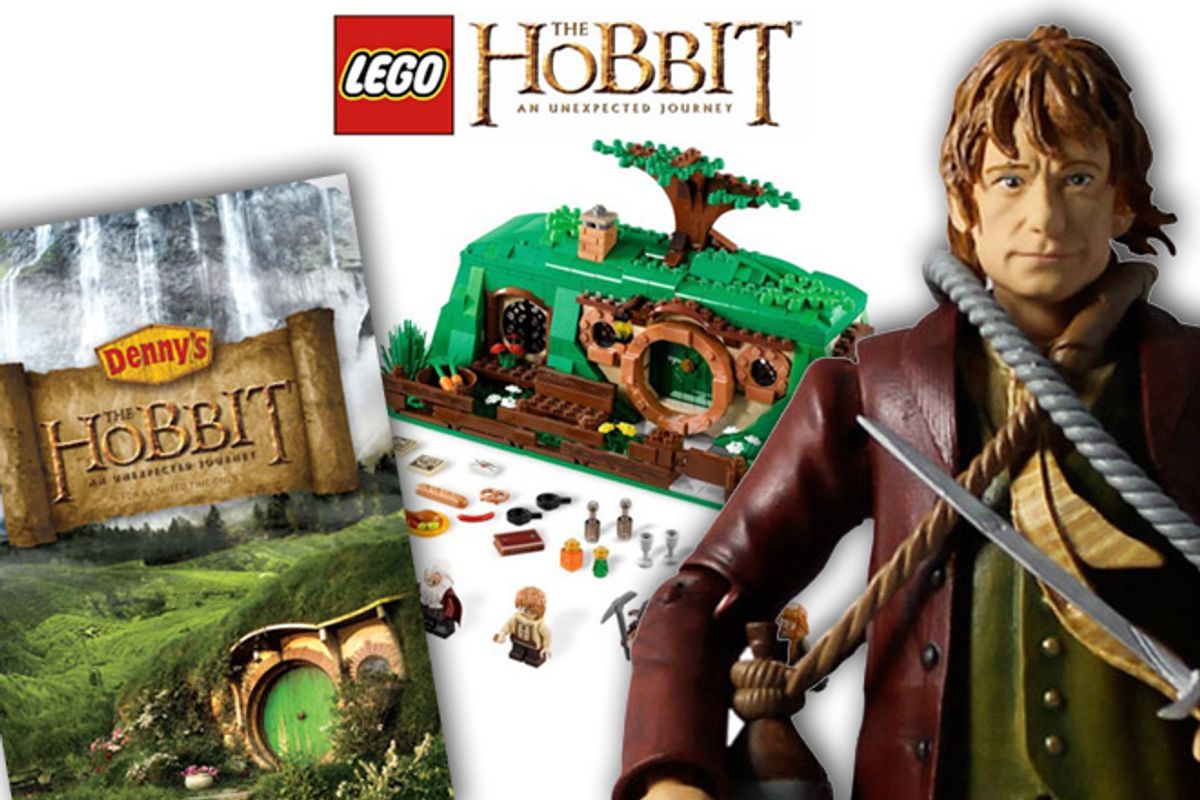 That Hollywood is driven more by market forces than by artistic ones is a cliché so old it’s almost become axiomatic. Blame the collapse of the studio system in the 1960s. Hollywood did just fine when all the major studios were in the business of creating, as well as financing, the films bearing their logos; they even went so far as to seek out new talent, nurture it, and develop it over the course of years. Today, studios are just the money men, and projects are developed by independent production companies — every actor and director has his or her own — and then brought to MGM or Fox or Disney in supplication with the hope of a big, fat bankroll.

Peter Jackson was lucky in that respect; when he brought “The Lord of the Rings” to New Line, he was prepared to fight for at least two films to cover the material — he expected to be offered one. New Line surprised him (and the rest of the world) by opting for three; one for each book in the trilogy. This almost dizzy-making example of the universe actually working the way it should for a change may have spoiled us, especially given the subsequent collaboration between Jackson and New Line, which was wonderfully faithful to Tolkien’s text (and let me just put my heresy on record by saying that the few alterations they made were actual improvements). So when the inevitability of “The Hobbit” became the actuality of “The Hobbit,” we may have been lulled into a sense of history repeating itself, although some of us were concerned by the news that Jackson would only be producing this one and that Guillermo Del Toro would be in the director’s chair — the same Guillermo Del Toro who vocally proclaimed his complete ignorance of all things Middle Earth. But when Jackson eventually replaced him, we could put aside our apprehensions.

Then there was the announcement of "The Trilogy." And the cold, hard realization that the money men are back in the driver’s seat.

“The Hobbit” is a very slight thing -- a children’s book, really; a picaresque, a romp. But it is a romp over solid bedrock: Tolkien’s world was already in place, and it was solid ground. “The Hobbit” was Tolkien’s way of testing the waters and teasing out the reception to that hidden world of his and to the possibility of opening its doors even wider. It was an appetizer; an amuse-bouche.

But the current media marketplace isn’t so friendly to baubles or trinkets; it demands empires. So the pint-size “Hobbit” must become a leviathan — a franchise. It must survive in a world where it can compete for marquee space with the latest installments of “Transformers” and “Iron Man” and “Pirates of the Caribbean.” It must, like those properties, be the gift that keeps on giving. These days, simply producing a great film will not justify a $270 million price tag. It’s got to generate a brand.

The only problem is that “The Hobbit” isn’t like those other properties; it’s a literary adaptation. You don’t expect to see “Anna Karenina” parceled out into three giant chunks, each one filling out the narrative gaps with new sequences involving secondary and tertiary characters — and maybe a few cameos from players in “War and Peace” while they’re at it — even though “Anna Karenina” is much, much longer than “The Hobbit.”

But my guess is that the suits at New Line don’t see “The Hobbit” as a literary property; they see it as a typical genre confection — something that can be marketed as video games and action figures and smartphone apps and meals at Denny’s (the mind reels at the thought of J.R.R. Tolkien perusing a Denny’s menu). Hollywood is generally respectful of literature (occasionally even suffocatingly reverent, as with pretty much every Jane Austen adaptation ever made), but apparently any property that lends itself to CGI is immediately relegated from the bookshelf to the toy bin. This may work as a general principle, but every rule has the exception that proves it, and “The Hobbit” is no “John Carter.” (If you want an example of what goes wrong when a literary masterpiece is retooled for the Happy Meal set, look no further than Rob Letterman’s “Gulliver’s Travels.”)

I hold out one small hope: J.R.R. Tolkien wrote a boatload of material about the history and genealogy of Middle-earth, much of it published posthumously in books like “The Silmarillion.” If Peter Jackson and his crew have gone to that well for their God-only-knows-how-many hours of new material, we may end up with something that has a reasonable claim to literary fealty. But if not, well, how many of us will want to come back for the five-film adaptation of “The Children of Húrin”? You can count me out, for one.

Not that the money-men will care. They’ll still be tallying up the take from the Hobbit Lego sets and celebrating.

But probably not at Denny’s.