We love to call it out for flying off the rails. But the genius of the series: It always recovers its footing 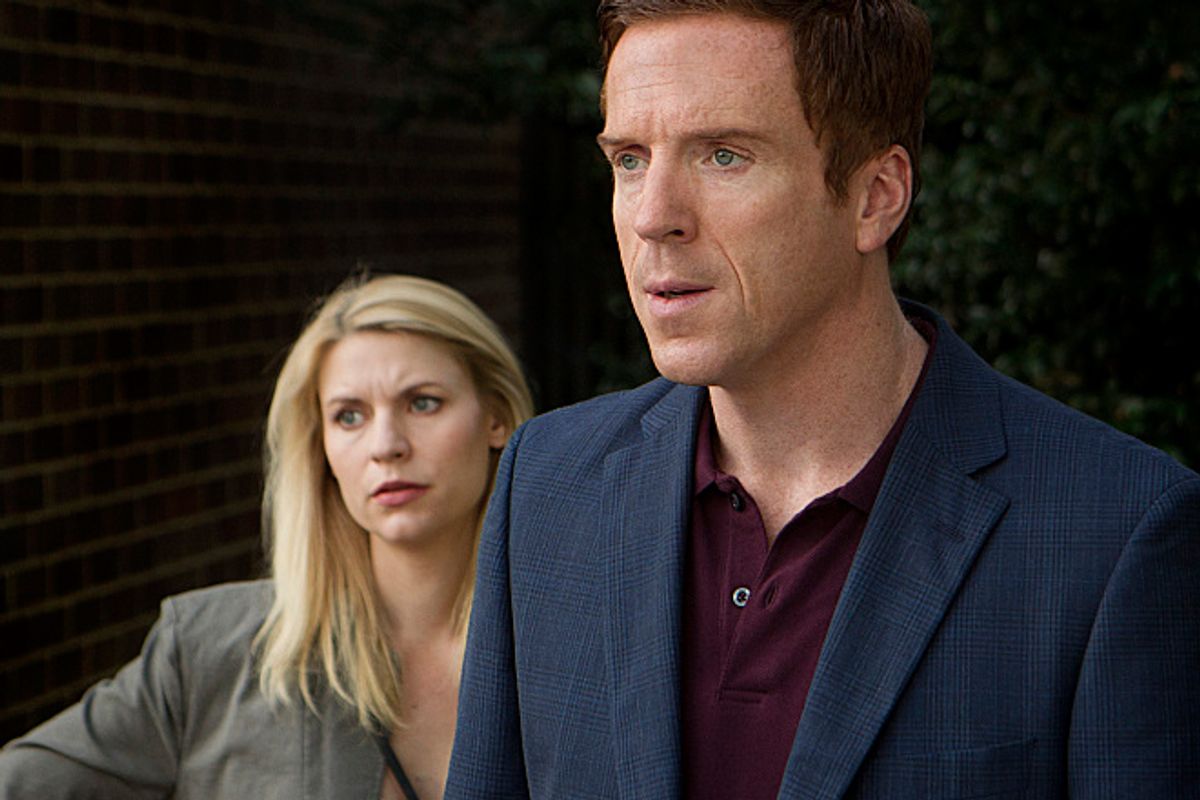 “Homeland” returns tonight with the penultimate installment of its second season, having just delivered the most controversial and outrageous episode of its existence. “Homeland” has previously done a lot of crazy things, but last week’s storyline, in which Abu Nazir kidnapped Carrie and then let her go after Brody promised to kill the Vice President but before Brody had actually done so, seemed to many — me included! — like a very long, tipsy walk into implausibility town. But a week later, there is one “Homeland” pattern that permits me to believe it will be back on the side of good television this week: “Homeland’s” habit of repeatedly jumping back and forth over the shark.

Doing crazy things and then pulling back on them — writing as if they don’t matter, tamping them down so they’re irrelevant, silo-ing them off from the main plot — is a standard “Homeland” tactic. “Homeland” regularly does something bananas to give the audience a thrill and then, weeks later when you re-examine the moment, you find that it has had little to no effect on the thrust of the show’s major storylines and relationships. "Homeland" jumps the shark one episode, but then swiftly steps back to the other side in time for the next.

Here are four examples of crazy things “Homeland” has done that, infuriating as they were, did not have catastrophic long-term effects.

1.  Carrie’s memory wipe.
Last season’s “cliffhanger” was the loss of Carrie’s short-term memory and with it the knowledge that Brody was a terrorist. At the time, this seemed like a foul-up, a foot-dragging tease and the most outlandish use of amnesia since the last time it served as a plot point on ‘The Bold and the Beautiful.” But in season two, Carrie’s amnesia was very quickly rendered a non-issue. By episode two, Brody’s terrorist affiliations were revealed even though Carrie, as far as we know, has never gotten her memory back. Carrie’s memory wipe was a major, melodramatic stunt, but it had no long-term consequences. Like a lot of the craziest things “Homeland" has done, it was just something to yell at your TV about for one episode.

2. Brody texts Abu Nazir in the middle of an assassination attempt.
In episode two of this season, Brody was invited into a high-level war room in which the occupants were coincidentally watching an assassination attempt of Abu Nazir. Brody sent Nazir a text message warning him just in time to duck the sniper’s bullet. (Please someone get me Brody’s security clearance and also one of his magical telephones, which gets excellent cell service in national security briefing rooms.) This was nutso and absolutely did not have to happen — snipers can miss. But except for Nazir’s “thanks for sending me that text” comment to Brody in a more recent episode, it was immaterial -- a really silly event contained to just one episode.

3. Brody kills a guy in the forest.
Brody snapped the neck of the Gettysburg tailor following a long chase through the woods because he was really overwhelmed (and he murders people when he gets really overwhelmed). Nothing much about this story made sense: Why would the terrorists send the very recognizable and important Brody to do this errand? But there was no reason to hurt one’s head about it because a week later, it barely mattered. There have been no consequences. Brody told the CIA the tailor died, that’s it. The whole overly dramatic, not very convincing chase sequence could just as easily not have happened.

4. Dana and Finn kill someone with their car.
Many “Homeland” aficionados were convinced that Dana and Finn’s hit-and-run was going to be the dumbest thing “Homeland” did all season. (Ha!) Instead, the incident has had emotional ramifications, especially for Dana and Jessica, but no “90210”-level, kids-in-the-courtroom cheeseball ones. It’s an incident that has been contained. In retrospect, the most irksome thing about it is that it makes Carrie’s recent car crash seem even more unlikely.

The level of outrage after each of these incidents may be part of our current, obsessive TV culture. As Vulture suggests, audiences have been so burned by shows like “Lost” and “24” that they are constantly on the lookout for the moment when a beloved show, yes, jumps the shark. In a way, the “Homeland” pattern of making short-term lunatic moves that are long-term irrelevant is a clever response to this sort of scrutiny. Rather than promising to make sense of every little thing eventually, like "Lost," or basing future episodes on the craziest elements of what came before in the name of continuity, like "24,” “Homeland” uses insane plots as haphazardly as it sees fit; they are audience goosers it can follow up on, or not. All this to say, it’s very possible the next episode of “Homeland” will be great — and that Carrie's kidnapping will barely come up as "Homeland" swims back around the shark one more time.