From cushy prison cells to human kidneys, some things just shouldn't be for sale 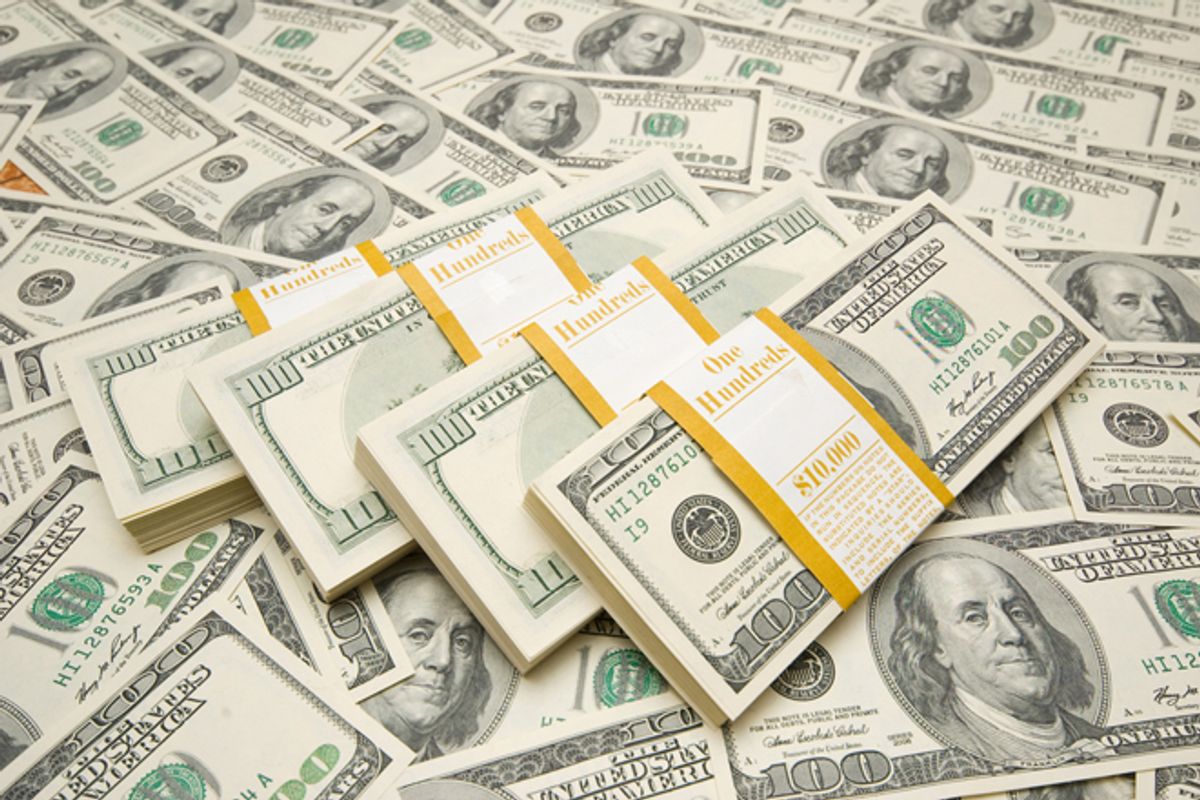 Need a womb? You can rent one from an Indian surrogate mother for $8,000. Want to make millions? Do like Natalie
Dylan did and auction off your virginity online.

Before the financial crash sounded a high-decibel wakeup call, Americans had gone decades without serious public discussion about the intersection of markets and morals. Sold on Reagan-era market worship and frenzied deregulation, we looked more and more to markets to solve our problems and enhance our lives. But that’s slowly starting to change. We're beginning to ask the question: When everything is for sale, how much does it really cost us?

Economists, religious leaders and philosophers are getting into the conversation. The Institute for New Economic Thinking and Union Theological Seminary are conducting a series of panels exploring questions about markets and their ability to give us the things we want and need in life. Political philosopher Michael J. Sandel, author of What Money Can't Buy: The Moral Limits of Markets, discussed the implications of a price-tag driven society in a recent issue of the Altantic. “Today, the logic of buying and selling no longer applies to material goods alone,” writes Sandel. “It increasingly governs the whole of life.”

What has changed in recent years, Sandel argues, is not so much an increase in human greed, but the rapid extension of markets into areas of life like healthcare, politics, education, procreation, and the criminal justice system -- areas where they may do more harm than good.

In allowing ourselves to think that markets alone "decide" what can be bought and sold, we have forgotten that markets exist to serve human beings – not the other way around. We're finding out that in a society where everything is for sale, corruption and inequality tend to increase, which creates social unrest.

Here’s a list of some things that are currently for sale that shouldn’t be.

In America’s two-tiered justice system, the rich get access to high-priced attorneys and special privileges, even in the form of a more comfortable prison cell.

In Santa Ana, Calif., they call it “pay-to-stay,” a system in which those arrested for relatively minor crimes can pay around $100 a night for a clean, quiet, less-crowded alternative to a squalid county jail. Money can buy you amenities like iPods, exercise bikes, cell phones, and even work-release programs. According to Prison Legal News, a Pasadena program advertises to “clients” in brochures inviting them to “Serve your time in our clean, safe secure facility! ... We are the finest jail in Southern California.” The price tag? $135 per day.

As the New York Times reported in 2007, the self-pay jails “operate like secret velvet-roped nightclubs” where “administrators can operate like bouncers, rejecting anyone they wish.”

Strapped local and state governments argue that the pay-to-stay programs generate much-needed cash. But what about fairness? Apparently that's expendable.

It has long been easier for children of the wealthy to secure internships in hot industries, whether through the indirect financial contributions of their parents or the luxury of being able to take unpaid positions. But outright purchase? That's the new normal.

Mocking any remaining illusions that America is a meritocracy, internships for sale have gone from disturbing anomaly to national trend. Parents are shelling out cash to for-profit companies to place their college-age kids in interships that are usually unpaid. Some are buying internships in online charity auctions. The Wall Street Journal has reported on organizations like fundraising Web site CharityFolks.com, which offers internships for sale to companies includingRolling Stone, Elle magazine and Atlantic Records. In the New Republic, Timothy Noah laments a growing trend in which “internships, a principal avenue for upward mobility in our economy, have become a commodity to be sold to the highest bidder.”

What's next? Paying for a job?

No other legislature in the developed world does it. But in America, congressional parties now post prices for key slots on committees. It wasn’t always so, but in the last few decades, the old seniority system that used to govern leadership selection and committee assignments has been swept away. As political scientist Thomas Ferguson explains, “In its place, the parties copied practices of big-box retailers like Walmart, Best Buy or Target…You want it – you buy it.”

Cash flow now determines the most fundamental structure of lawmaking. Ferguson describes a system in which outside influencers can determine who leads in Congress and what legislation gets passed based on how much money they donate. And the new system of lawmaking is only becoming more blatant and grotesque in its efficiency:

“They even sell on the installment plan: You want to chair an important committee? That'll be $200,000 down and the same amount later, through fundraising. Unlike most retailers, though, Congressional leaders selling committee positions never offer discounts. Prices only drift up over time.”

While the folks in coach are standing in long lines, wealthy customers zip through security at lightning speed. Why? Because they can afford to.

We've always had shorter lines for first-class check-in and boarding. But two-tiered security is a new thing. Before 9/11, airports were responsible for security screening and used private security contractors. After the attacks, Congress created the taxpayer-funded Transportation Security Administration to handle screening. But only rich taxpayers get the benefit of the express lines that many airports have created to pamper more affluent travelers. As Joshua Holland has noted, “it’s a case of the government maintaining and enforcing a blatant class division.”

The Registered Traveler program, launched by the TSA in 2004, allows passengers to pay a fee of up to $200 to a private company for "pre-screening." Holland notes that such programs makes travel less safe, as those who pay aren’t subjected to the same kinds of searches as regular flyers.

Our private healthcare system has clearly failed us. We have by far the most expensive system in the developed world, and many of us still can’t seem to get basic services or see a doctor when we need one. But the doctor is always in if you’ve got the dough.

Concierge medicine, also known as boutique or retainer medicine, is a growing trend in which you pay a fee, usually thousands of dollars, for the kind of attention from your doctor that you would be naturally receiving under a more humane system. One such perk is your doctor’s cell phone number.

Doctors are supposed to follow an ethical code requiring them to care for sick people, but in the case of concierge medicine, the sick who have money will be cared for first. Most concierge physicians still keep their traditional practice, but take additional fees from a small number of patients who receive special perks and priority treatment. Concierge medicine takes the two-tiered system that has always existed in the healthcare system and makes it official.

It used to be considered an urban legend, but yes, there is a robust black market for human organs which often involves violence. Criminals in the organ trade can make many times what they pay; a kidney, for example, may cost $10,000 and be sold for up to $150,000.

As the world's poor grow increasingly desperate, brokers are getting bolder. According to a Bloomberg report, “brokers use deception, violence and coercion to buy kidneys from impoverished people, mainly in underdeveloped countries, and then sell them to critically ill patients in more-affluent nations.”

Iran is currently the only nation that allows the legal buying and selling of organs. Nevertheless, organ trafficking appears to be on the rise and has become a billion-dollar industry. The ethics of an industry that targets the poor is hotly debated around the world.