No, really. Stop comparing everything to "Portlandia"

We know: Every farm-to-table restaurant is like "Portlandia." So is every band. And city. And tech company. Enough! 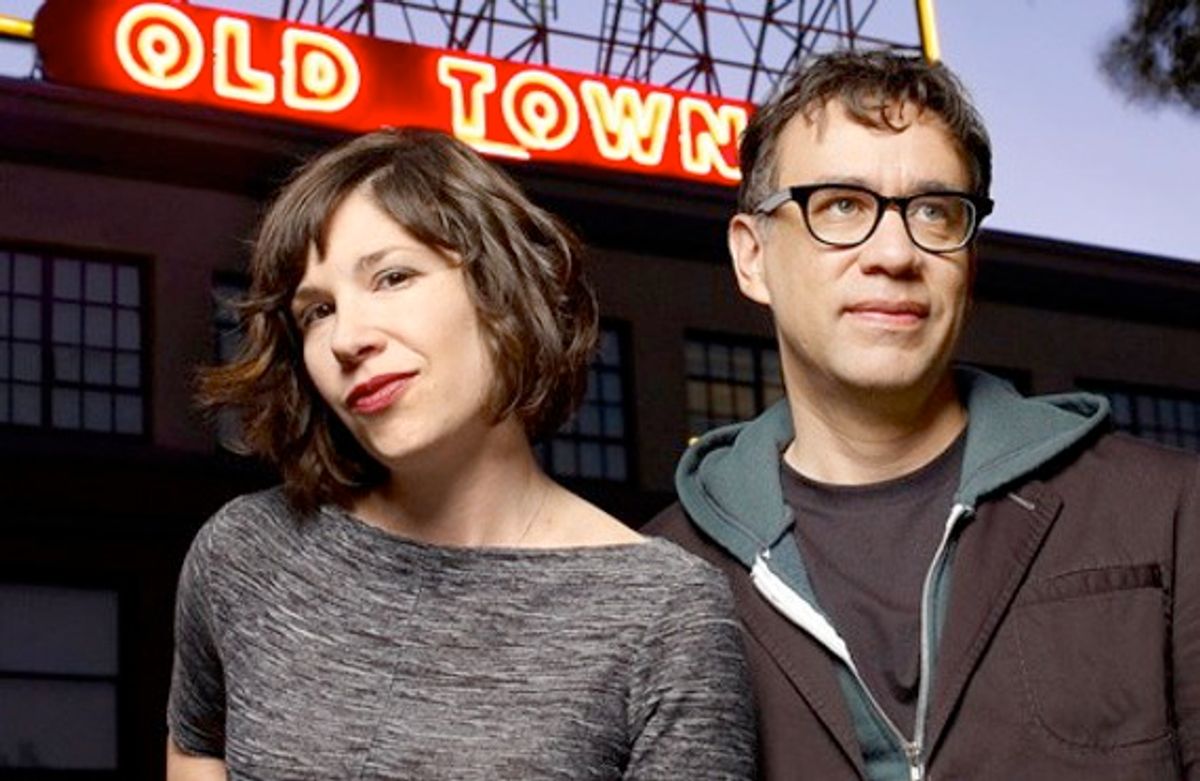 Trendspotters, take note: We asked you in February to please stop comparing everything with a quirky bent to "Portlandia."

And for a while there, the fact that every magazine writer and blogger used the Fred Armisen and Carrie Brownstein comedy show as their go-to metaphor made it a little uncool. Only now "Portlandia" metaphor creep is back. (In a retro and nostalgic way!) Next month, the show returns for Season 3 on IFC, and that means January will bring a wearying new onslaught of references.

But as you'll see, there's almost nothing left to compare to "Portlandia." A street fight has been compared to "Portlandia." The Republican National Convention. Rock bands and classical groups. Restaurants in every city. Waiters. Diners. Authors. Laura Linney. (And, yes, we know! That could be a "Portlandia" sketch itself!)

So before you make the same simile as everyone else, consider this list of recent comparisons fair warning:

Actual violence: A fight broke out between food cart vendors and 'a pack of homeless street youth' today in Portland, with both sides reporting that their opponents were 'armed with brass knuckles, knives and a police-style baton.' We would not be surprised if this was a flash mob stunt to be included in the next season of "Portlandia." (The Braiser, Dec. 5)

Patent discussions at Apple: There's clearly an institutional bent toward aggressive patenting at the company (and throughout the tech sector). The article goes on to describe an Apple staff meeting that sounds like a Portlandia sketch:
Apple's engineers were asked to participate in monthly "invention disclosure sessions." (Above the Law, Oct. 9)

The Google lounge at the Republican National Convention: In one corner, Utah Senator Mike Lee was trying out one of those combination workstation-treadmills that allows you to type on your laptop while getting your exercise. Nearby, a bowtie-wearing barista was preparing to serve lattes. Republican National Committee Chairman Reince Priebus, getting a tour of a room that looked vaguely like it had been lifted from a "Portlandia" sketch, gazed on approvingly. (Toronto Globe and Mail)

Interviews with Jack Dorsey of Square in Wired: The conversation is beginning to sound like an episode of "Portlandia" co-scripted by Aaron Sorkin and Andrew Ross Sorkin. (Wired)

Portland itself: Portland is my new favorite place. The food, the people, the music, the coffee! Like they say in the show "Portlandia," Portland is "where young people go to retire." (New York Times T magazine, Sept. 23)

Towns outside Portland: Rachel Lucas, the county Republican chairwoman, calls it "Portland creep" and says she's sometimes struck by the change when she sees tattooed hipsters at her local grocery store in Beaverton. "It looks like an episode of 'Portlandia'," she says with a rueful laugh. (Portland Oregonian, Sept. 23)

Craft fairs in Los Angeles: It's extremely tempting to describe Unique LA as "not your grandmother's craft fair," because it is -- vendors could be straight out of "Portlandia," shilling products with birds on them and books that wouldn't be out of place on an Urban Outfitters sale table. (LAist, Nov. 26)

Festivals in Washington, D.C.: The festival's foodie/indie culture merger sounds like something worthy of a "Portlandia" sketch. (Washington Post, April 30)

Diners in Calgary: Calgary diners are savvy, well-traveled eaters who have developed a "Portlandia"-like obsession with the provenance of their food over the last four or five years. (Toronto Globe and Mail, Nov. 14)

Restaurants in New York: Diners fearing an experience akin to a "Portlandia" sketch will be pleasantly surprised. (New Yorker)

Brew pubs in Massachusetts: To quote the placemat that sat on my table, decorated with diagrams explaining the brewing process, it is "the first brewery on the East Coast to use a solar-energy hot-water system to brew our beers." This may sound like a humorous, hipster-bashing line from a "Portlandia" sketch or a brutally on-point episode of Louie. But it's real and it's delicious and it's situated right on Route 7. (Berkshire Eagle, Sept 26)

Restaurants in Chicago: Hall's camera captures a waitress explaining the provenance of each fish on the menu, and the moment is perhaps unintentionally reminiscent of a "Portlandia" sketch spoofing organic fetishists. (Chicago Tribune, Nov. 16)

Waiters in Chicago: A mumbling server straight out of "Portlandia," his demeanor somewhere between blasé and bored, doesn't help. (Crain's, Sept 2012)

Laura Linney: Meanwhile, Lila (Laura Linney), a next-door neighbor obsessed with cats and pesto, gets the wrong idea about Jeff's neighborly manner by falling for him. Like a mildly deranged visitor from "Portlandia," Lila clearly deserves a movie of her own. (Seattle Times, Nov. 9)

Beck's book on McSweeney's press: "Song Reader" is charming -- even sort of funny. You can almost imagine it as a plot twist in an episode of "Portlandia" -- Fred Armisen transcribes all of his vinyl records into sheet music to one-up his indie neighbors with his retro cred. (Slate, Dec. 6)

Jon Raymond's novel: This isn't just a "Portlandia" sketch given a couple hundred pages to roam free. (The Stranger, May 9)

Classical bands: In one sense, this sprawling collective, which reinterprets everything from Jay-Z to Thursday Pantera for the cello, sounds as if it could have been lifted from a "Portlandia" sketch. (The Capital Times, Madison, Wis.)
May 3)

Indie bands: Of course, that description makes them seem like a flesh-and-blood "Portlandia" sketch, but the tunes are rock solid, vacillating between low key, smoldering lamentations to syrupy sweet ditties that are, well, still pathos-driven lamentations. (Other Paper, Sept. 13)