If you thought the Petraeus scandal was embarrassing, wait 'til you hear how much is spent on military golf courses 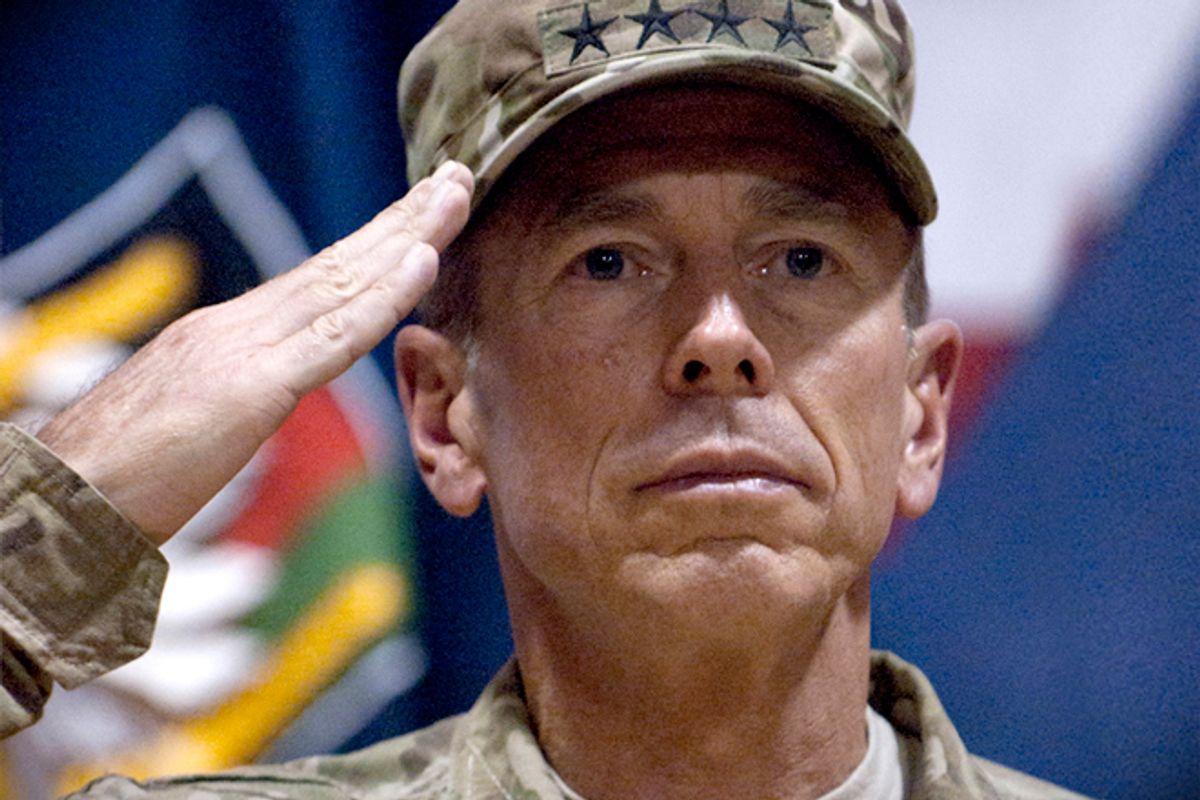 The David Petraeus scandal has shined a light on the luxurious, subsidized lifestyle of the U.S. military's top generals. But so far, what the media has uncovered only scratches the surface of the abuses. Here are seven absurd ways the military wastes our money -- and none of them have anything to do with national defense.

1. A whole battalion of generals? The titles “general” or “admiral” sound like they belong to pretty exclusive posts, fit only for the best of the best. This flashy title makes it pretty easy to say, "so what if a few of our military geniuses get the royal treatment -- particularly if they are the sole commanders of the most powerful military in human history." The reality, however, is that there are  nearly 1,000 generals and admirals in the U.S. armed forces, and each has an entourage that would make a Hollywood star jealous.

According to 2010 Pentagon reports, there are 963 generals and admirals in the U.S. armed forces. This number has ballooned by about 100 officers since 9/11 when fighting terror -- and polishing the boots of senior military personnel -- became Washington’s No. 1 priority. (In roughly that same time frame, starting in 1998, the Pentagon’s budget also ballooned by more than 50 percent.)

Jack Jacobs, a retired U.S. army colonel and now a military analyst for MSNBC, says the military needs only a third of that number. Many of these generals are “spending time writing plans and defending plans with Congress, and trying to get the money,” he explained. In other words, a large number of these generals are essentially lobbyists for the Pentagon, but they still receive large personal staffs and private jet rides for official paper-pushing military matters.

Dina Rasor, founder of Project on Government Oversight, a watchdog group, explains that this “brass creep” is “fueled by the desire to increase bureaucratic clout or prestige of a particular service, function or region, rather than reflecting the scope and duties of the job itself.”

It’s sort of like how Starbucks titles each of its baristas a “partner” but continues to pay them just over minimum wage (and a caramel macchiato per shift).

But the skyscraper model doesn’t mean that the armed forces are democratizing. In fact, just the opposite; they’re gaming the system to allow more and more officers to deploy the full power of the U.S. military to aid their personal lives -- whether their actual work justifies it or not.

2. The generals’ flotillas. Former Defense Secretary Robert Gates appointed Arnold Punaro, a retired major general in the Marines, to head an independent review of the Pentagon’s budget. Here’s the caution he came up with: “We don’t want the Department of Defense to become a benefits agency that occasionally kills a terrorist.”

So, just how good are these benefits? For the top brass, not bad at all. According to a Washington Post investigation, each top commander has his own C-40 jet, complete with beds on board. Many have chefs who deserve their own four-star restaurants. The generals’ personal staff include drivers, security guards, secretaries and people to shine their shoes and iron their uniforms. When traveling, they can be accompanied by police motorcades that stretch for blocks. When entertaining, string quartets are available at a snap of the fingers.

A New York Times analysis showed that simply the staff provided to top generals and admirals can top $1 million -- per general. That’s not even including their own salaries -- which are relatively modest due to congressional legislation -- and the free housing, which has been described as “palatial.” On Capitol Hill, these cadres of assistants are called the generals’ “flotillas.”

In Petraeus’ case, he didn’t want to give up the perks of being a four-star general in the Army, even after he left the armed forces to be director of the CIA. He apparently trained his assistants to pass him water bottles at timed intervals on his now-infamous 6-minute mile runs. He also liked “fresh, sliced pineapple” before going to bed.

3. Scandals. Despite the seemingly limitless perks of being a general, there is a limit to the military’s (taxpayer-funded) generosity. That's led some senior officers to engage in a little creative accounting. This summer the (formerly) four-star general William “Kip” Ward was caught using military money to pay for a Bermuda vacation and using military cars and drivers to take his wife on shopping and spa excursions. He traveled with up to 13 staff members, even on non-work trips, billing the State Department for their hotel and travel costs, as well as his family’s stays at luxury hotels.

In November, in the midst of the Petraeus scandal, Defense Secretary Leon Panetta demoted Ward to a three-star lieutenant general and ordered him to pay back $82,000 of the taxpayers’ misused money. The debt shouldn’t be hard to repay; Ward will receive an annual retirement salary of $208,802.

Panetta may have been tough -- sort of -- on now three-star general Ward, but he’s displayed a complete refusal to reevaluate the bloated ranks of the military generals. Unlike his predecessor Robert Gates, who has come out publicly against the increasing number of top-ranking officers and tried to reduce their ranks, Panetta has so far refused to review their numbers and has yet to fire a single general or admiral for misconduct. He did, however, order an “ethics training” after the Petraeus scandal.

4. Warped sense of reality. After the Petraeus scandal, the million-dollar question was: Did the general who essentially built the world’s most invasive surveillance apparatus really think he could get away with carrying on a secret affair without anyone knowing? Former Secretary of State Gates has floated at least one theory at a press conference in Chicago: “There is something about a sense of entitlement and having great power that skews people’s judgment.”

A handful of retired diplomats and service members have come out in support of Gates’ thesis. Robert J. Callahan, a retired diplomat who served as U.S. ambassador to Nicaragua, wrote an Op-Ed in the Chicago Tribune explaining how the generals’ perks allow them to exist on a plain removed from ordinary people:

“Those with a star are military nobility, no doubt, and those with four are royalty. Flying in luxurious private jets, surrounded by a phalanx of fawning aides who do everything from preparing their meals to pressing their uniform trousers, they are among America's most pampered professionals. Their orders are executed without challenge, their word is fiat. They live in a reality different from the rest of us."

“With the senior guys and the flag officers, this is like the new royalty,” he said on his weekly radio show. “We treat them like kings and princes. These general officers in the military, at a certain point, become untouchable... In many cases, they get their own airplanes, their own helicopters. When they walk into a room, everybody comes to attention. In the case of some of them, people are very afraid to speak up or to disagree. Being separated from real life all the time in that way probably leaves them vulnerable (to lapses in moral judgement)."

Sounds like a phenomenon that’s happening with another pampered sector of society (hint: Wall Street). Given the epic 2008 financial collapse, do we really want to set our security forces on a similar path of power, deception and deep, crisis-creating delusion?

5. Military golf. Of course, generals and admirals aren’t the only ones who get to enjoy some of perks of being in the U.S. armed forces. Although lower-ranking service members don’t get private jets and personal chefs, U.S. taxpayers still spend billions of dollars a year to pay for luxuries that are out of reach for the ordinary American.

The Pentagon, for example, runs a staggering 234 golf courses around the world, at a cost that is undisclosed.

According to one retired lieutenant colonel in the Air Force, who also just happens to be the senior writer at Travel Golf, the very best military golf course in the U.S. is the Air Force Academy's Eisenhower Blue Course in Colorado Springs, Colo.

He writes, “This stunning 7,000-plus yard layout shares the same foothills terrain as does the legendary Broadmoor, just 20 minutes to the south in Colorado Springs. Ponderosa pines, pinon and juniper line the fairways with rolling mounds, ponds and almost tame deer and wild turkey.” (The Department of Defense did come under fire a number of decades ago when it was discovered that the toilet seats at this course cost $400 a pop.)

And the number of golf courses is often undercounted, with controversial courses in Guantanamo Bay, Cuba, and Mosul, Iraq, often left off the lists, which makes assessing the total costs difficult.

Yet some courses rack up staggering expenses as they become far more than mere stretches of grass.

According to journalist Nick Turse, “The U.S. Army paid $71,614 [in 2004] to the Arizona Golf Resort -- located in sunny Riyadh, Saudi Arabia,... The resort actually boasts an entire entertainment complex, complete with a water-slide-enhanced megapool, gym, bowling alley, horse stables, roller hockey rink, arcade, amphitheater, restaurant, and even a cappuccino bar -- not to mention the golf course and a driving range.”

DoD's Sungnam golf course in the Republic of Korea, meanwhile, is reportedly valued at $26 million.

For non-golfers, the military also maintains a ski lodge and resort in the Bavarian Alps, which opened in 2004 and cost $80 million.

6. “The Army goes rolling along!” Vacation resorts aren’t the only explicitly non-defense-related expenditures of the Department of Defense. According to a Washington Post investigation, the DoD also spends $500 million annually on marching bands.

The Navy, the Army, the Air Force and the Marine Corps all maintain their own military bands, which also produce their own magazines and CDs.

The bands are [pun intended] “an instrument of military PR,” according to Al McCree, a retired Air Force service member who owns Altissimo Recordings, a Nashville record label featuring music of the service bands.

The CDs are -- by law -- distributed for free, but that doesn’t mean the private sector can’t profit off these marching bands. According to the Washington Post article, “The service CDs have also created a private, profitable industry made up of companies that obtain the band recordings under the Freedom of Information Act. They then repress and package them for public sale.”

As if subsidizing the industry of multibillion-dollar arms dealers weren’t enough, the record industry is apparently also leeching off the taxpayer-funded military spending.

7. The Pentagon-to-Lockheed pipeline. While the exorbitant costs of private planes and hundreds of golf courses may seem bad enough, the most costly problem with the entitlement culture of the military happens after generals retire. Since they’re so used to the luxurious lifestyle, the vast majority of pension-reaping high-ranking officers head into the private defense industry.

According to William Hartung, a defense analyst at the Center for International Policy in Washington, D.C., about 70 percent of recently retired three- and four-star generals went straight to work for industry giants like Lockheed Martin.

“If you don’t go into industry at this point you are the exception,” Hartung said.

This type of government-to-industry pipeline, which he said was comparable to the odious Wall Street-to-Washington revolving door, drives up the prices of weapons and prevents effective oversight of weapon manufacturing companies -- all of which ends up costing taxpayers more and more each year.

“I think the overspending on the generals and all their perks is bad enough, but the revolving door and the ability of these people to cut industry a break in exchange for high salaries costs more in the long run,” said Hartung. “This can affect the price of weapons and the whole structure of how we oversee companies. It’s harder to calculate, but certainly in the billions, compared to millions spent on staff per general.”