Too many severed limbs, too many rotting corpses

"The Walking Dead" and "American Horror Story" are too grisly to bear. Will TV viewers stomach "The Following"? 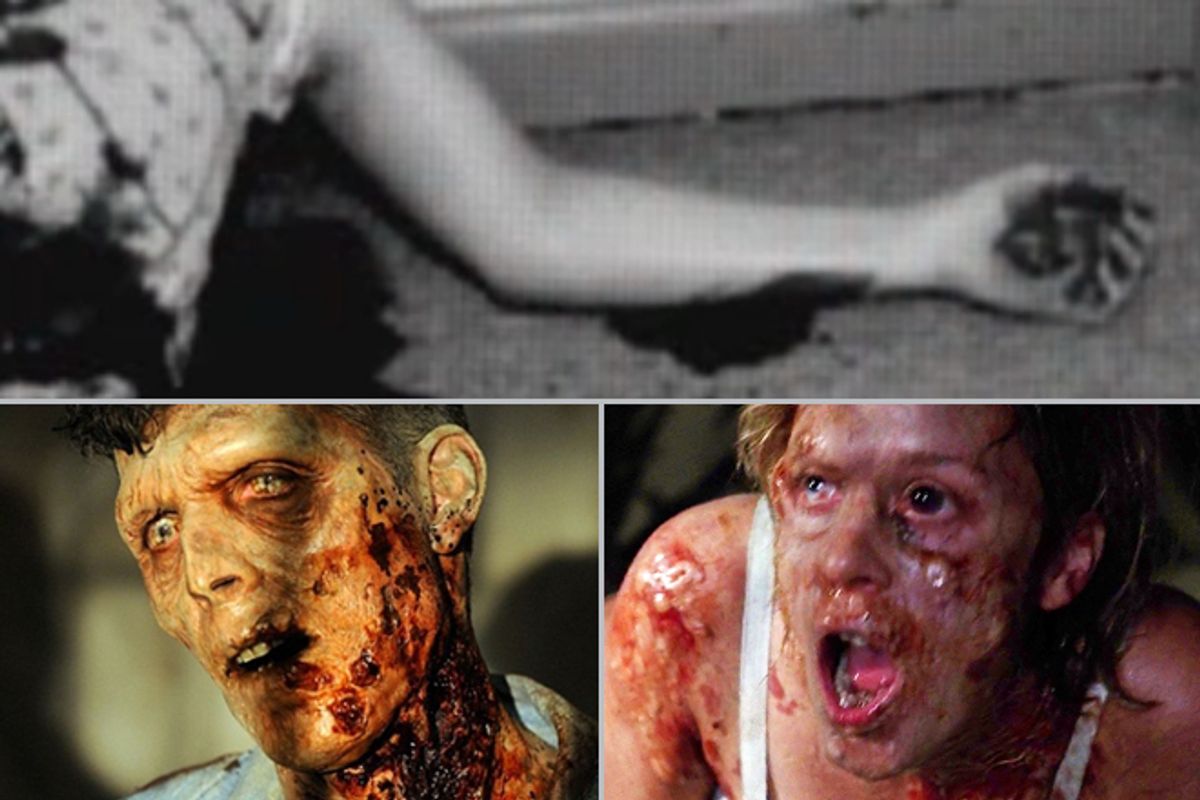 Stills from "The Following," "American Horror Story: Asylum" and "The Walking Dead"
--

“American Horror Story: Asylum,” as its title promises, traffics in horror tropes. But not all horror tropes are created equally disgusting. Last season, “American Horror Story” was primarily a ghost story: It boasted Frankenstein creatures, burn victims, bloated corpses, suicides, hangings and some blood, but in both savagery and bodily fluids, it was prim in comparison to “AHS’s” current installment. This season, the sociopaths circling the asylum include serial killers who skin people alive and wear a mask of human flesh, a Santa Claus who likes to stab and slice, and a Dr. Mengele type whose human experiments make the sewn-up creatures from last season look like cuddly stuffed toys. Puddles and puddles of blood have pooled in just about every episode: A tortured inmate put his hand in a meat-slicer; Jessica Lange’s Sister Jude imagined slicing her wrist; a forced hysterectomy went wrong.

As Alyssa Rosenberg at Think Progress and Linda Holmes at NPR have recently written, we’ve reached a saturation point in TV violence: It's everywhere. Shows like “The Sopranos” and “The Wire” used brutality to great, disturbing effect, and their DNA can be seen all over television. Almost all dramas with any ambition — give or take a “Friday Night Lights” — are punctuated by scenes of vicious and often graphic brutality. “American Horror Story” and AMC’s zombie drama “The Walking Dead,” the two grossest shows currently on TV, could not exist in all their grisly glory if series like “Breaking Bad” — which sawed up a corpse and threw it in a vat of acid early in its run — hadn’t set a high bar on TV grotesqueries (and broken in various standards and practices departments in the process).

But “American Horror Story” and “The Walking Dead” aren’t just the cracked-out descendants of prestige dramas: They’re also the amped-up descendants of the mainstream network serials that have been bringing the ick for years and years. If violence is a staple of the serious, niche cable drama, it is also a staple of the mass, network crime show. “AHS” and “Walking Dead” are a new, extreme front in TV gore because they simultaneously incorporate the virtuosic effects and gravitas of serious drama's violence and the “Ew! Did you just see that!” camp quality found in slasher movies and, say, “Bones.”

Almost every episode of series like "Bones," CSI” and “Castle” contains a horribly wronged corpse. The network crime shows typically make the corpse so nasty, s0 scandalous, or so strange that the audience won't think of it as a dead person, dead people being a depressing thing to think about after a long day at work. Better to think about the amazingly proficient crime-solving team that will get justice for that momentarily seen, but-wow!-that's-sick corpse. Procedurals have perfected a way to make terrible acts of violence seem fun — or at least a starting point for a fun crime-solving jaunt.

“AHS” and “The Walking Dead” foreground violence and mauled bodies much more so than crime shows, but there is a similar over-the-topness to their horror. The groaning, limping, partially dismembered zombies lurching around "The Walking Dead” are so hideous and so not-quite-human, it's hard to look away from them. What the makeup artists did to Chloe Sevigny’s character on "AHS" this year was the most impressive-in-a-barfworthy-way of deploying that craft I've ever seen. Neither "AHS" nor "The Walking Dead" are simple or silly, but in their treatment of violence and death they have at least as much in common with procedurals and horror movies that unconflictedly set out to make gore and guts entertaining than they do TV's prestige dramas.

Both "The Walking Dead" and "AHS" have been able to attract big audiences (and in the case of "The Walking Dead," really big audiences), with this relatively highbrow, yet unabashedly gross formula. I'll be interested to see what happens to "The Following," a serial killer drama starring Kevin Bacon that Fox is premiering in the new year. "The Following," about a brilliant murderer and his acolytes, is as grisly, bloody and dark as any cable show could be (the killer has a thing for cutting out people's eyes, for example), but it doesn't have a light touch (0r zombies). The series is creepy as all get out, but it's not exactly fun. I’ll be interested to see if it does well, or if it will need to get a little more bloody ridiculous to survive.