How abusers get away with targeting Indian women 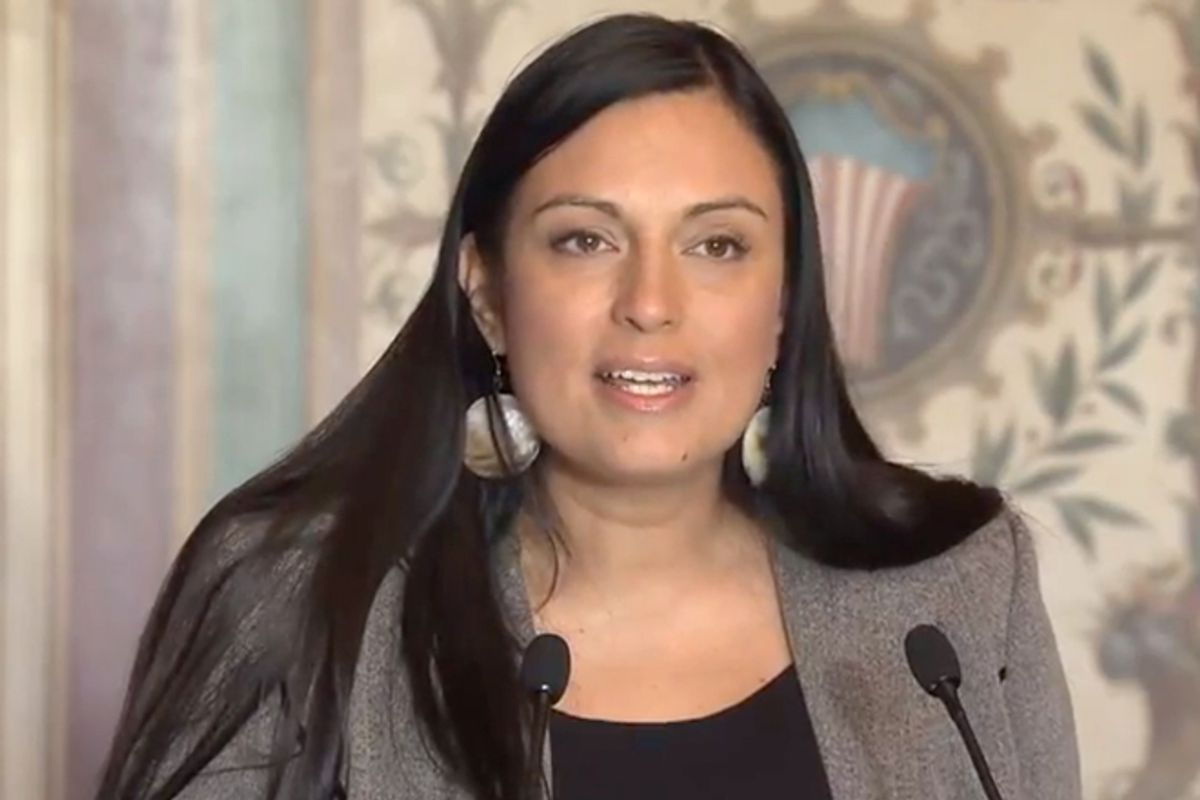 "We have serial rapists on the reservation -- that are non-Indian -- because they know they can get away with it," said Charon Asetoyer, executive director of the Native American Women's Health Education Resource Center in Lake Andes, S.D. "Many of these cases just get dropped. Nothing happens. And they know they're free to hurt again."

Asetoyer was talking about the loophole that prevents tribal authorities, who have jurisdiction over crimes committed on Indian territory by Indians, from having any authority over non-Indian male abusers. That's despite the fact that non-Indian men account for an estimated 80 percent of rapes of Indian women, and that the astronomical rate of abuse of Indian women is well documented by the federal government.

A provision in the Senate version of the reauthorization Violence Against Women Act, which has been languishing in partisan deadlock since the spring, would change that. But according to a Huffington Post report, it's proving the last sticking point for House Republican leadership. The version of the bill passed by the House did not include the expanded protections for Native, immigrant and LGBT victims, but 10 House Republicans broke ranks Tuesday to urge the leadership to support the Senate version.

"It's immoral that the Congress of the United States would stand there and say that Indian women are less than their white counterparts, that we shouldn't have the same equal protection under the law," said Asetoyer.

Technically, such crimes fall under federal jurisdiction, but in practice, that requires the FBI and the U.S. Attorney's Office, sometimes located hours away from reservations, to investigate and potentially bring charges, which has been extremely rare. If the crime is less than a felony, it tends to slip through the cracks. And that's if the crime is even reported.

"They don't report because they don't believe that anything will happen, that it doesn't matter to anyone particularly in the justice system that they've been violated," said Dorma Sahneyah, a program specialist at the National Indigenous Women's Resource Center who works with tribes around the Southwest. "It's very different to get them to believe again that it's going to be worth the effort." She has heard often of non-Native men taking advantage of the impunity they've been indirectly allowed: "If you're doing something and you know you won't be held accountable, you're going to keep doing it."

"We know these rape cases are hard to prosecute anyway, much less getting defendants to the federal courts, which are often hundreds of miles away from tribal areas," says Deborah Parker, vice chairwoman of the Tulalip Tribes in Washington state and herself a survivor of and witness to sexual abuse. "Those living on the reservation and have domestic partners know that there's a jurisdictional issue. They know that the law essentially doesn't apply to them. They walk away without any repercussions."

Overall, American Indians are two and a half times likelier to be victims of violent crime than the general population, according to the Department of Justice.  But a 2010 report by the General Accounting Office found that there is an unusually high rate of refusals to prosecute by U.S. attorneys, who "declined to prosecute 46 percent of assault matters and 67 percent of sexual abuse and related matters."  The report noted that violent crimes actually had a higher rate of declination, possibly because the evidence was harder to come by.

The Justice Department responded with a series of recommendations, and according to South Dakota U.S. Attorney Brendan Johnson, who chairs the department's Native American Issues subcommittee, increased funding to ramp up prosecutions. That's helped strengthen prosecutions within the tribal authorities, Johnson told Salon: "When I started three years ago, Rosebud Indian Reservation had one licensed attorney prosecuting about 5,000 cases a year. You can't do justice with one attorney doing 5,000 cases a year. In the last three years, because of Justice Department and Interior Department funding, they now have five licensed attorneys." He said a women's advocate on the reservation had told him that women have begun reporting cases more frequently "because they believe there will be some accountability in tribal court."

The DOJ also recommended expanding tribal authority over cases that include non-Indian perpetrators, which was adopted in the Senate version of the Violence Against Women Act. "If we prosecute a domestic violence case in federal court," said Johnson, "they have to travel hours to a court they're not familiar with, with people they're not familiar with, take time away from work. There are all sorts of challenges that go into that."

Though Indian-specific provisions have been in every version of VAWA, which historically has passed on a bipartisan basis, the issue of Indian jurisdiction over non-Indians has been of particular concern to Republicans, including Sen. Chuck Grassley, who in February said on the Senate floor that it was among the "provisions that I cannot support." He added, "Why would Congress, should it decide for the first time to make such a change, do so on a bill to reauthorize VAWA? Why should domestic violence cases be the first criminal cases to be treated in this way?"

But last week, at the White House Tribal Nations Conference, Obama reiterated his support for the policy: "With domestic violence so prevalent on reservations, we’re pushing Congress to restore your power to bring to justice anyone -- Indian or non-Indian -- who hurts a woman."

The president used the word "restore" because American history is littered with federal efforts to limit the jurisdiction of tribal authorities, starting with the Major Crimes Act of 1885 through the 1978 Supreme Court case Oliphant v. Suquamish Indian Tribe, which stripped Indian tribes of any jurisdiction over criminals committed by non-Indians on their land. And of course, when it comes to the rape and abuse of Native American women by white men, intergenerational trauma runs deep and far back into history.

Parker, who told her personal story at a press conference in April at the urging of her state's senator, Patty Murray, says some congressional leaders have been responsive to the concerns of Indian women, including Sens. Murray, Barbara Boxer, Lisa Murkowski (a Republican) and Amy Klobuchar. She personally met with the president and Vice President Biden, who has taken an active role on the negotiations, and said Obama  "expressed his concern about the high rates of crime against Indian women."

"On the other hand," Parker told Salon, "the House side did not speak with us."