HSBC: Too big to jail

After being charged with money laundering, HSBC gets a Monopoly-style get-out-of-jail card 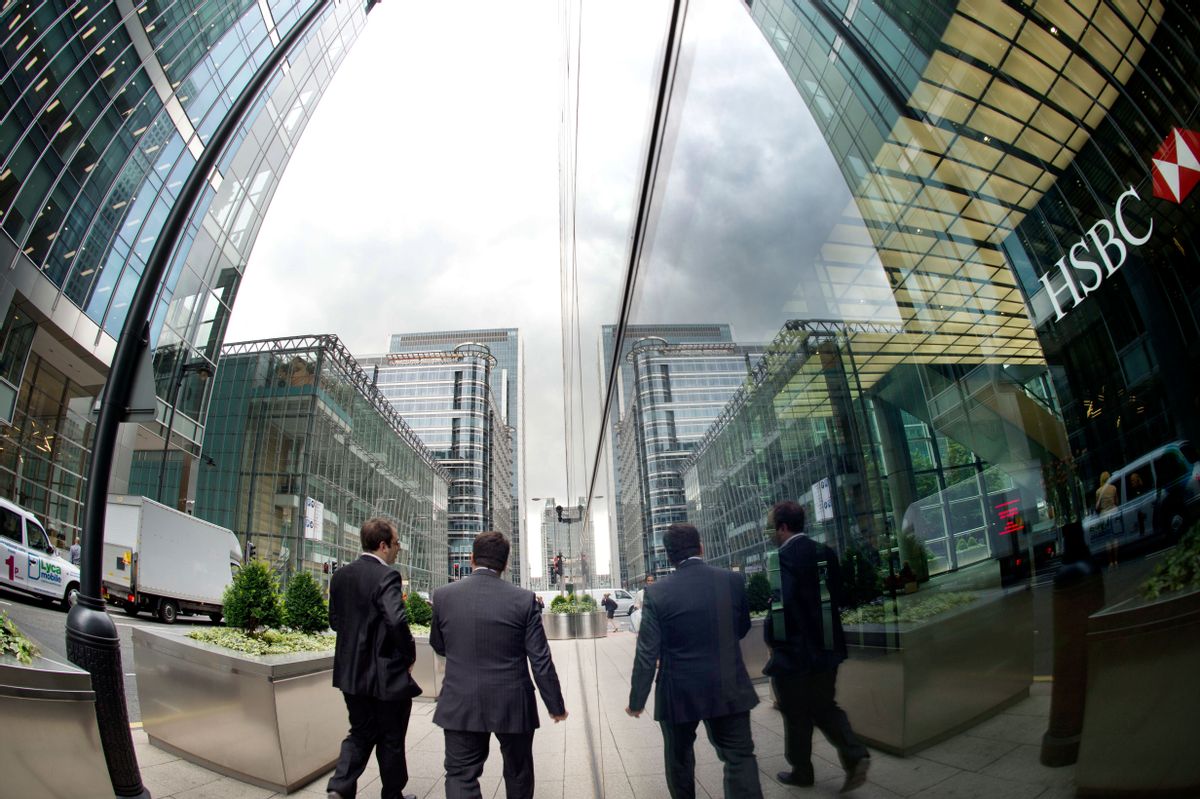 The New York Times reports this week that megabank HSBC has escaped criminal prosecution for money laundering that probably funded terrorists and narcotics traffickers. Why? Because regulators and prosecutors were petrified that an indictment would undermine the entire financial system. TheTimes quotes anonymous government sources who confessed fears about bringing formal charges because doing so would be a "death sentence" for the bank. So they let it off the hook.

That’s right, HSBC is officially above the law. Too-big-to-fail has become too-big-to-prosecute.

A year-long investigation found that the British banking giant had blown right past federal laws by laundering billions of dollars from Mexican drug trafficking and processing banned transactions on behalf of Iran, Libya, Sudan and Burma. A Wednesday Times article serves up vivid passagesabout the shady goings-on, including HSBC officials working closely with Saudi Arabian banks linked to terrorist organizations. According to the report, "the four-count criminal information filed in the court charged HSBC with failure to maintain an effective anti-money laundering program, to conduct due diligence on its foreign correpsondent affiliates and for violating sanctions and the Trading With the Enemy Act."

In a statement, the bank said it “will acknowledge that, in the past, we have sometimes failed to meet the standards that regulators and customers expect.” HSBC apologized and promised never, ever to do it again, scout’s honor.

I’m pretty sure I know what would happen to me if I stole a loaf of bread from the corner store. But a big bank can act as financier to freaking terrorists and never worry about things like jail. Funny how a corporation is a person until it breaks the law.

Senator Carl Levin, chairman of the U.S. Senate Permanent Subcommittee on Investigations, a congressional watchdog panel, observed that "the culture at HSBC was pervasively polluted for a long time." Now we can be certain it will remain so. Criminal activity has been legitimized. In the world of banking, crime pays, big-time.

A number of recent bank scandals, including the Barclays LIBOR rate-fixing revelation, demonstrate that big banks are behaving with blithe disregard for the law and they are avoiding criminal prosecution by paying fines – the cost of doing shady business. The prosecutors and regulators involved in the decision to let HSBC off with a wrist-slapping fine of $1.9 billion (half a quarter’s profit) have officially declared that they are not working in the public interest. They are being paid by taxpayers to protect big banks. Shouldn’t they be on the banks’ payroll?

Simply saying that a bank is too big to prosecute is a travesty of justice. If prosecutors could not charge HSBC, they could charge individuals within the bank. And if they can’t charge HSBC without killing it and endangering the whole system, then something obviously needs to change. Here’s an idea: break up the big banks.

In his first term, President Obama promised to do something about too-big-to-fail banks, which can defraud consumers and poison them with toxic products, grossly neglect their duties to shareholders, and tank the economy – only to be rescued with public money. There has been much bold talk about fixing the problem; little meaningful action. Today, big banks are even bigger and more dangerous than they were before the financial crisis.

It should be clear by now that the banking industry has become an oligopoly -- a scenario in which an industry is controlled by a small number of firms. When big banks blew up the economy and helped bring on the Great Depression, they got broken up. Congress passed the Glass-Steagall Act, which separated insured commercial banks from speculative investment banking. But starting in the mid-'80s, regulators looked benevolently away while massive consolidation in the industry shrank the total number of American banks as bigger banks swallowed little ones. So today, the biggest banks control a larger and larger share of deposits.

The election of Elizabeth Warren, a powerful critic of big banks, to the Senate is a hopeful sign that in 2013 something may finally be done to rein in dangerous financial institutions. But don’t hold your breath that they will get broken up. It’s obvious that Obama should live up to his promises and make ending too-big-to-fail a key goal of his second term. But the banking industry is so formidable that its defenders occupy some of the most influential positions in Washington, such as the famously bank-centric Treasury Secretary, Tim Geithner. Obama could certainly replace him and others with people who would be less inclined to serve the banks and more inclined to serve the public. And he should.

For government regulators to hand out get-out-of-jail-free cards in this real-life game of Monopoly is too much. It's time to end the public menace of too-big-to-fail once and for all. Until then, you might say that big banks can even get away with aiding and abetting murderers. And you might be right.