As a gay man, big biceps seemed like the best way to attract a guy. Too bad I had the limbs of a 15-year-old girl 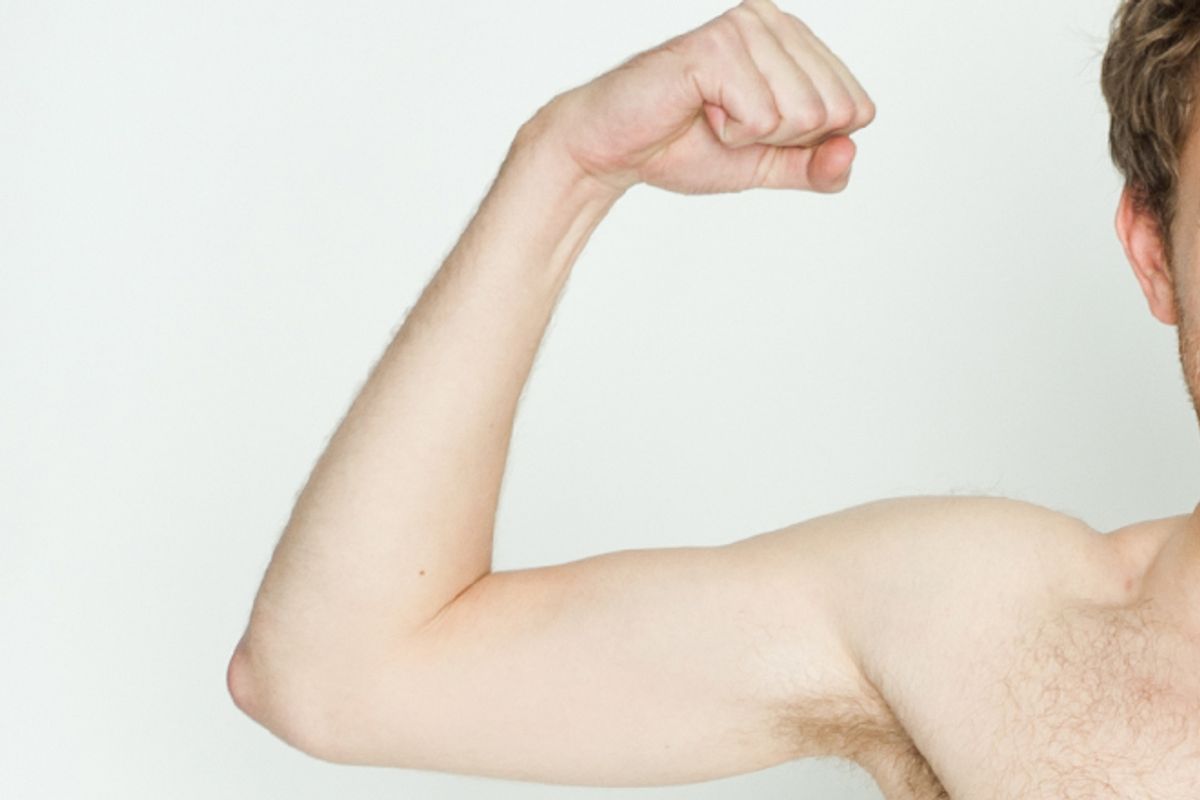 "Body Issues" is an ongoing personal essay series about obsessions with our own shape.

I knew Ariel seemed too good to be true. He was a muscular Israeli who lived a couple subway stops from me, and based on the photos he was sending me, he had a flawless body and lots of expensive teak furniture.

For the past two weeks, we had been corresponding on Grindr, the gay hook-up app, and, for whatever reason, he really, really wanted to meet up. Day after day, he would send me photos of himself flexing in different parts of his living room and ask me to come over to his place after work. As a skinny 25-year-old, this surprised me, not only because I was incompetent at using Grindr, but because guys who looked like Ariel rarely went for guys who looked like me.

That is, until he took off my shirt. I could see him eyeing my torso -- sizing up my unremarkable chest and my nonexistent six-pack. But mostly, he was lingering over my perversely skinny arms, which, despite my best efforts to bulk them up, have always looked like they belonged on a 15-year-old girl. He was doing the appraisal that all gay men do when they see each other shirtless, and I recognized the look on his face: Disappointment.

For the next five minutes, we had awkward, unpleasant sex -- the kind you have when you just want to get it over with -- and after he was done, he quickly and rudely ushered me out of the apartment, leaving me to stand under the blinking liquor store sign feeling annoyed, angry and, most of all, ashamed. My anxieties were confirmed the next day when I noticed that he had added a single line to his Grindr profile: "Looking for MUSCULAR guys only."

Like many gay men, I've always been self-conscious about various parts of my body. Objectively speaking, I was lucky enough to inherit a frame that, even if it doesn't fit the standards of some members of the gay community, is in the general ballpark of what one would call "attractive." I'm tall and fairly lean, and, even though I herniated two disks in my back in my early twenties, I manage to swim laps and do weights a few times a week. But I eat a lot of pasta and dessert, and I drink beer, so I've never been even close to having the kind of perfect physique that many gay men strive for. For the most part, that's never bothered me.

Except for my arms.

If you're a man, big biceps are probably the easiest and most superficial way to signal your manliness to the world. As the New York Times recently pointed out, young men are facing strong pressure to bulk up earlier and earlier, which, as any person who's watched men in a gym weight room can attest, mostly just means working out their arms and chest. But for gay men, big biceps are an especially potent sexual signal -- a marker of manliness and strength and cultural currency. For the so-called gay party elite, the men who summer in Fire Island, go to fancy nightclubs and party on "The Circuit," big biceps, along with a muscular body, are all but a prerequisite.

None of my own attempts to get buff have been successful. When I was in high school, I was on my provincial crew team, and at my coach's urging, I began binge eating tuna and doing weights to get bigger. My teammate Leslie and I would wake up at 5 a.m. to do bench presses and squats and torture ourselves on various weight machines before school. And yet while her biceps got bigger and bigger, mine remained stubbornly the same -- two gangly twigs, a reminder of my body's immutability and of the cruel tyranny of genetics. My dad, despite being a lifelong athlete, had exactly the same body shape as me. I doubt his skinny biceps ever bothered him, but he never tried to hit on a buff dude in a tank top at a bar called Shay Foo Foos.

This concern about my arm muscles -- and my attraction to muscular men -- was a weird deviation from the rest of my adult life. Ever since I was a teenager, most of my friends were butch lesbians who relentlessly criticized patriarchal beauty standards. (One of those friends is an outspoken pro-fat activist who does performances celebrating her large stomach.) My gay male friends were, for the most part, just as skinny and normal-shaped as me, and we spent our time making fun of what we saw as the vapidity of mainstream gay life: the gays who constantly listened to Adele remixes, went to tanning salons, got tribal tattoos and obsessed about their bodies.

And yet, whenever I was in a cheesy gay club, I would zero in on precisely those men -- the ones dancing shirtless with the washboard abs and bulging arms -- and do my best to get their attention. For the most part, this just involved staring at them from across the room -- which, for the record, is actually a very effective strategy for hitting on gay men -- but that never seemed to work. In the rare occasion I got one to talk to me, I would notice him sizing up my body and staring at my skinny arms. After an awkward conversation, these men would usually saunter off to go dance to a Kylie song. So whenever I went out, I would wear long-sleeve shirts that, if I rolled them up, would cover up my biceps. Or I would just keep my jacket or sweater on while I was inside.

Over the course of my early twenties, I made numerous other attempts to get bigger. I followed exercise regimens I saw in magazines or online, or sometimes I just made up exercise routines as I went along. While I managed to put on a bit of muscle mass, none of it made any difference to my arms. At a certain point, I just gave up and decided I was going to have to come to terms with my limbs' fundamentally twinkish nature. I told myself that the guys who were repelled by my biceps probably weren't worth going after anyway, that there were enough men who didn't seem to care, that those superficial guys probably cry themselves to sleep every night in their tragic whey-powder-filled apartments and that I should just learn to love myself just the way I am.

Of course, things are never actually that simple. People don't really have sudden epiphanies in which they learn to love their bodies unconditionally, unless they're in a Lifetime movie or a bad novel. Instead, we spend most of our lives coming to terms with the limitations of our bodies and, by extension, the inevitable disappointments of life itself -- a process that is as lengthy and tedious as it is awkward. Sometimes, I genuinely don't care about the shape of my arms, and sometimes I still look at my body and feel disgust and self-hatred. But the older I've gotten, the more subdued and unsurprising those feelings have become and the less likely they are to ruin my day.

I've learned that physical attraction is much more complicated than I once thought and, for that matter, that it is much more fun to sleep with people who don't look like they've just been unwrapped from packaging. A big part of growing up involves learning that -- most of the time -- your brain and your penis like two very different things and that, at a certain point, one of them is just going to have to learn how to compromise. As it turns out, the best romantic and sexual experiences tend to happen when both of them agree on something or someone. In my case, that doesn't tend to happen when I'm having hateful sex with a proxy for the muscular douchebags who tortured me in high school.

In a way, I think this is a lesson that the gay community is learning, too. Over the past decade, as gay people have become more accepted and gay ghettoes have begun to empty out, I've noticed that the extremely muscled gay aesthetic has begun to fade away, especially among twenty-somethings. While enclaves like Chelsea are still synonymous with beefy, muscle-y men, most young gay people aren't moving into them -- instead they're heading to Brooklyn, or the Mission, or Silver Lake, or other more mixed areas where diversity means there's less pressure to get buff than in, say, West Hollywood. Larry Kramer told me in an interview a few years ago that he doesn't see as many gay people on the street anymore, that they seem to have disappeared. It's not that they went anywhere; it's just that it's harder to tell them from the straight ones. Hopefully, in coming generations, gay guys won't have to feel any more anxious about their chest or bicep size than any other guy.

This summer, I left New York and fulfilled a longstanding dream of moving to Berlin, a city that is hedonistic and gay. At times, it feels a little bit like a giant gay bathhouse with lots of graffiti and some very permissive smoking rules. It is the most liberated place I've ever lived -- a fact that extends to the shape of men's bodies. The plucked, overmuscled men that seem to populate most North American gay ghettoes are almost nowhere to be seen in Berlin. They've been replaced by furry men who, for the most part, look like they haven't seen the inside of a gym in years. Since coming here, I've never felt more relaxed about the way I look -- or, for that matter, more attractive.

A few weeks ago, I went to a gay party in a labyrinthine former train station filled with strange dark alcoves and cigarette smoke, and there were a thousand handsome men with normal, unmanicured bodies dancing to pounding electronic music. I jumped around with friends until 8 a.m. on a dance floor filled with bodies just like mine -- hundreds of young men dressed in the same ratty clothes as me. I felt comfortable, handsome and self-assured. When I walked home, reeking of smoke, the sun rising above my dirty, empty neighborhood, I felt a little bit like I was a teenager again. I also, finally, felt like a grown up.