"SNL" has a blue Christmas

With a tribute to Sandy Hook, special guests galore and just the right amount of filth, "SNL" hits the right notes 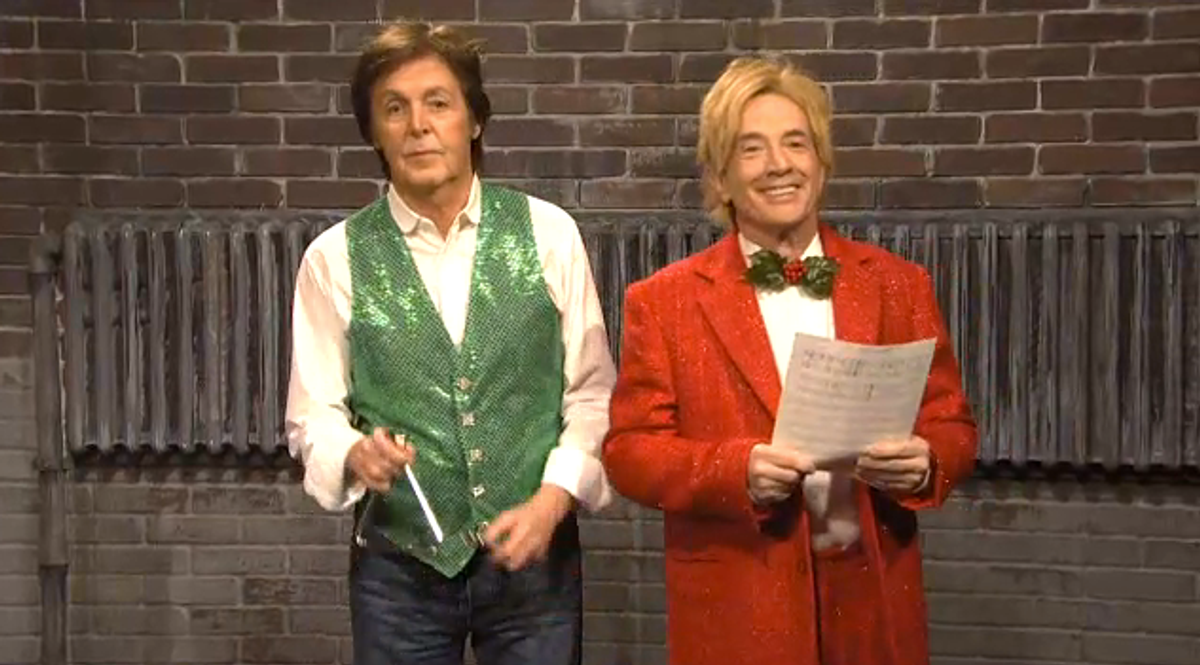 The specter of Sandy Hook looms heavy this weekend, but "Saturday Night Live" proves time and again that they are at their best when they have to put on a show for a grieving nation. The somber cold open, with the New York Children's Chorus singing "Silent Night," paid quiet tribute to the 26 lives lost on Friday while providing a necessary buffer for the episode that followed. It acknowledged, tastefully, how uncomfortable it can be to laugh in the wake of incomprehensible violence. But after the song finished, the screen faded to black and it was back to business as usual.

SNL brought the winning combo of having a beloved alum Martin Short host the year's penultimate "SNL" (or the last one ever, if the Mayans are to be believed), and a Beatle! And the writers and cast really brought it. Alum shows tend to have a gaggle of surprise guests anyway, but with every celebrity on Earth in New York for the 12-12-12 Sandy relief concert, this one packed heavier than usual star power.

Short's monologue, a three-minute musical tribute to Christmas coitus, featured cameos from Paul Shaffer, Kristen Wiig, Jimmy Fallon, Tom Hanks, Samuel L. Jackson and Tina Fey. (That's two celebrities per minute, for you mathematicians out there.) And while musical monologues have been something of a go-to this season, often with mixed results (I am looking directly at you, Seth McFarlane), it really worked for this holiday show. I had hoped Jimmy Fallon, Tracy Morgan et al. might reprise “I Wish It Was Christmas Today,” but Short crooning a virtual naughty list of holiday-themed boner euphemisms was a worthy substitute.

Rounding out last night's celebrity interlopers, we had Alec Baldwin as Tony Bennett, a silent Carrie Brownstein guesting on "What Up With That" and Kanye West's leather kilt, a star in its own right.

Perhaps due to the increased celebrity wattage, many of season 38's standouts -- like Taran Killam and Kate McKinnon -- didn't see much screen time. That is, with the very notable exception of "You're a Rat Bastard, Charlie Brown," a wonderfully absurd sketch that put Bill Hader's Al Pacino in the titular role and used nearly the full cast to wonderful effect. (Jason Sudeikis as Phillip Seymour Hoffman as Pig Pen?!!!!)

The show combatted the blues with blue, alright, with other hits including Short's turn as Kate Middleton's gynecologist. A sketch that, in addition to suggesting that the Misfit’s “London Dungeon” was probably written about Camilla Parker Bowles's vagina, also introduced “Piccadilly Cervix” as a moniker for the Duchess of Cambridge's ahem. Christmas has come early, indeed.

Weekend Update hasn't been able to match its election stride since polls closed on November 4, and unfortunately last night was no different. As a nod to the final night of Hanukkah, Vanessa Beyer made for a cute, but not particularly funny, bar mitzvah boy. And the Girl You Wish You Hadn’t Started a Conversation With at a Party fell flat, only serving as a reminder that the writers had deprived us of a holiday Stefan.

Paul McCartney's musical performance was meh — I can't say surprising, considering he was playing a snoozer track, "My Valentine," from his forgettable 2012 album, "Kisses on the Bottom" —  even with him trotting out almost Nirvana once more (how quickly the novelty has worn off). But at the eleventh hour, McCartney reminded us why we love him in a sketch that paired him with Short as bickering singing partners (Short flaunts a few little Ed Grimley dance moves). Sir Paul busted out with the only song he should have played on such a night: "Wonderful Christmastime!" Joined once again by the New York Children's Chorus, it was a nice bow on a naughty and nice holiday show.