That doesn't mean we can't ban some, make them a lot harder to get -- and maybe even tax the hell out of them 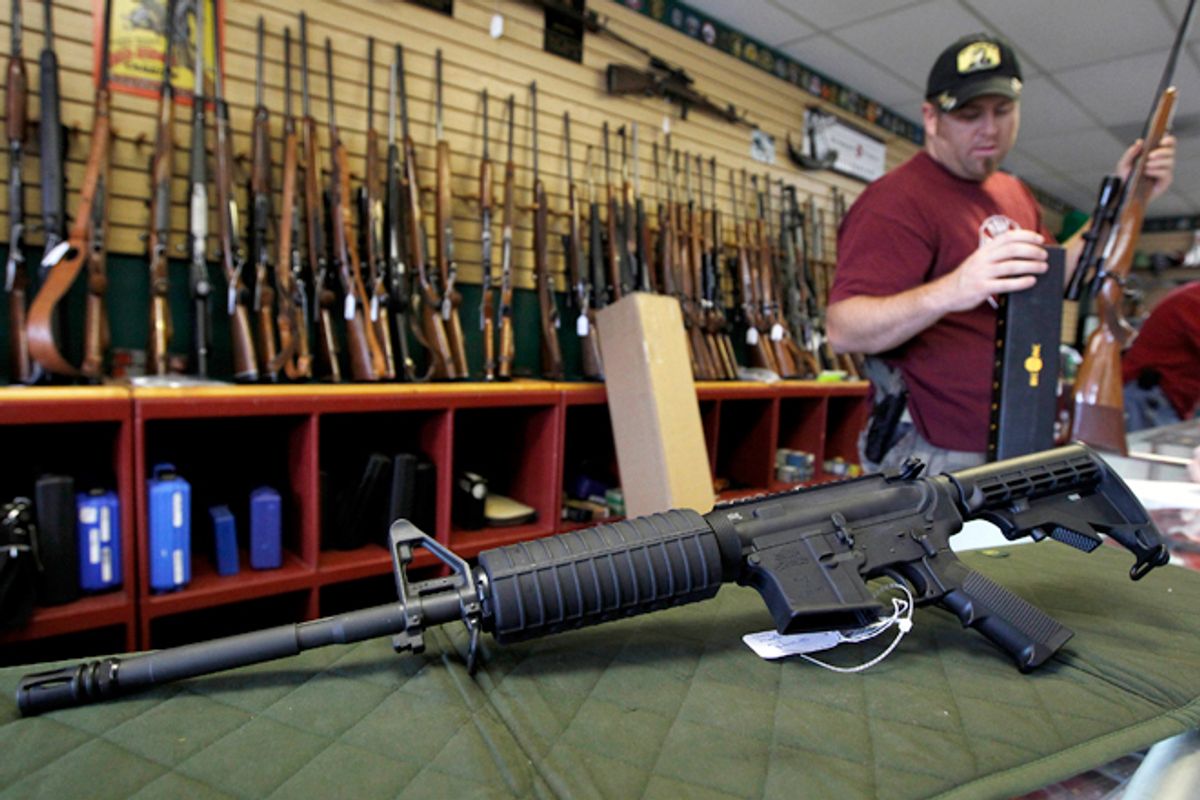 Effective gun control in America is impossible. It's impossible for a million different reasons, some of them new, many of them very old, but it's impossible all the same. It's impossible because of our courts, our history, our culture, and, most significantly, our surfeit of guns. There are just too goddamn many guns in the United States to make it difficult for crazy or dangerous people to obtain one, or many.

America is home to 310 million nonmilitary firearms. That's nearly one gun for every resident of the country, or just about three for each "household."

Gun control legislation powerful enough to make obtaining guns difficult enough to dissuade criminals from using them would, I think, require Prohibition-like manpower and government expenditures. It'd be as impossible a task as ending recreational marijuana usage. With lots of time and money you could make some progress toward a gun-free America. You might think it's worth it. Lots of people would agree. More Americans wouldn't. Even registering all of America's guns would be a massive, hugely expensive undertaking, as Canada learned a decade ago. And it would meet fierce, hysterical resistance.

A U.K.-style blanket firearms ban is obviously impossible, constitutionally and politically. Even Canadian-style firearms regulation, which requires licensing and prohibits or heavily restricts private ownership of most varieties of firearms, besides rifles and shotguns used primarily in hunting, probably wouldn't stand up to our current conservative judiciary's literalist (though not originalist) interpretation of the Second Amendment. Without a constitutional amendment -- and please remember that nearly half of Americans own firearms -- Congress can't restrict the gun trade to the degree necessary to significantly reduce American gun violence.

Arguably, it would be possible to make spree shootings more difficult, and therefore, hopefully rarer. The Supreme Court's conservative justices would theoretically be amenable to the idea that the Second Amendment doesn't provide a right to ownership of all varieties of firearms. The court probably (probably!) wouldn't overturn another ban on military-style semiautomatic firearms. It could be made much, much more difficult for the next would-be spree shooter to get access to weapons designed to kill as many humans in as short a period as possible.

But most deadly shootings -- the everyday kind that kill thousands of people every year in private homes and on street corners -- aren't carried out with military-grade armaments. Small handguns are cheap as hell and the Supreme Court says we all have a constitutional right to own them; how do you make it even slightly difficult for dangerous people to get one?

Maybe we make them less cheap.

America just has so goddamn many guns that they are incredibly easy and cheap to obtain. You can buy a whole bunch of guns and ammunition online, and lots of sites even offer free shipping. The only chance we have of making sure only responsible people own all of our millions and millions and millions of guns is to make getting guns more expensive, primarily through heavy taxation, and less convenient, through laws restricting who sells guns and where they're sold. (You know, maybe buying guns should be as inconvenient as trying to buy alcohol on a Sunday in much of the country, at the very least. Is that an acceptable standard, gun people?)

At the very least, conservative critics can't argue that the Federal Assault Weapons Ban was ineffective at driving up prices for most of the sorts of weapons and ammunition that civilians not currently plotting a violent insurrection have no legitimate use for. If we taxed the hell out of guns, and gun manufacturers, we'd have a legal means of restricting the gun trade and making it harder for criminals to get guns without infringing on the rights of non-criminal Americans to hunt or keep a gun at home for self-defense. (Non-criminal Americans would still be pissed off, obviously, if guns were suddenly much more expensive, but they should just deal with it.) If guns were much pricier, and if, as the Brady Campaign has been lobbying for years, "private" unlicensed sellers were required to perform the same background checks as gun shops, there'd be fewer cheap handguns flooding the streets of our cities, and likely fewer of them ending up murdering people in Mexico as well.

Taxation is not a remotely complete or perfect solution. Cigarettes are taxed at a punitively high rate in New York. People still smoke, and there is now a lucrative black market in cigarettes, usually enriching extremely unsavory people. And it wouldn't do as much to prevent domestic gun murders and accidents as it would armed robbery and gang violence and street crime. We'd still have the 300 million-plus guns we already have. America is going to have a shitload of guns and a shitload of gun murders for the foreseeable future.

If we can't ban guns, and taxing them is insufficient, our only hope is to work at creating an America where people want to shoot each other less.

There are countries with gun ownership rates nearly as high as our own and much less gun violence. You could attribute that to culture (other Western nations have a less blood-soaked popular media and lack our proud history of fetishizing power and violence and huge fucking guns) or regulation (nearly every other wealthy and gun-heavy nation registers firearms and requires licensing). But another thing Finland and Canada -- to name two nations with plenty of guns and not many gun murders -- have in common is a strong welfare state. There are also countries with many fewer guns than the United States, but with even higher homicide by firearm rates. They are all countries poorer and less equal than the United States. Social democracy might actually be a better deterrent to gun violence than gun control.

So let's push for gun registration, and background checks for unlicensed firearms sales, and bans on huge video game-style mass death machines with ammunition designed to pierce armor and tanks, by all means. Let's also look at taxing the hell out of guns, and using the money to buy ourselves a fairer nation, whose citizens are less terrified of slipping into intractable poverty if they lose a job, with universal access to mental and physical healthcare. I think we're stuck with our guns, and even our gun culture. We can hopefully do something about the factors that lead Americans to use their guns.