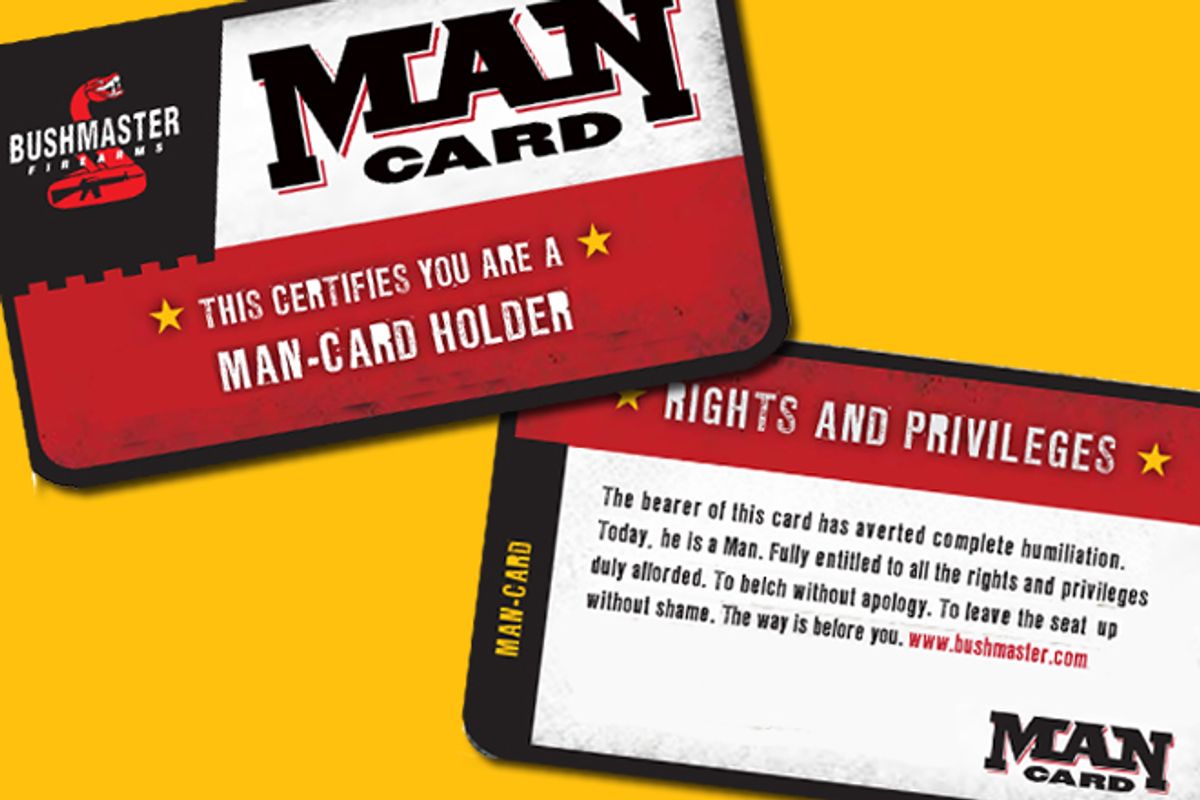 There are lots of reasons to own guns: Hunting, self-defense, clinging purposes, but also to bolster your deflated sense of masculinity. This is not some glib liberal notion about how men only buy guns to compensate for their inadequacies, this is the explicit aim of an ad campaign from Bushmaster, the maker of the assault rifle that was used to kill 27 people last week in Connecticut.

You see, you’re not officially a man until Bushmaster tells you you are. “To become a card-carrying man, visitors of bushmaster.com will have to prove they’re a man by answering a series of manhood questions. Upon successful completion, they will be issued a temporary Man Card to proudly display to friends and family,” a press release for the campaign reads.

Most of the quiz questions are pretty predictable and harmless, if dumb -- Do you eat tofu? Can you change a tire? Have you ever watched figured skating “on purpose”? -- but others are more challenging. One question gives you four possible options of how to respond if a car full of the rival team’s fans cuts you off on the way to the championship game. The correct answer, it turns out, is to commit arson: “Skip the game, find the other car in the parking lot, and render it unrecognizable with a conflagration of shoe polish and empty food containers.”

If property destruction isn’t your thing, you can always reclaim your manhood by purchasing a Bushmaster assault rifle, like the .223 Adam Lanza allegedly used.

But watch out, manly friends. Don’t let those emotions show or that glass be full of anything but non-light beer, because your buddies can “revoke” your Man Card at any point. Revokable offenses include being a “crybaby,” a “coward,” a “cupcake” (we have no idea what that means either), having a “short leash” (presumably thanks to a wife or girlfriend), or being just generally “unmanly” (this one has a woman icon).

In the wake of the shooting, some clever Internet users have employed their revoking privileges to taking away Bushmaster’s own man card, listing their location as Newtown, Conn. “Bushmaster is run by awful human beings,” one revocation notice reads.

You can get your own Man Card, or revoke Bushmaster's, here.