Somehow, the Fox pundit ascribes the shootings to "abortion pills," iPhones and homosexuals. Has he no shame? 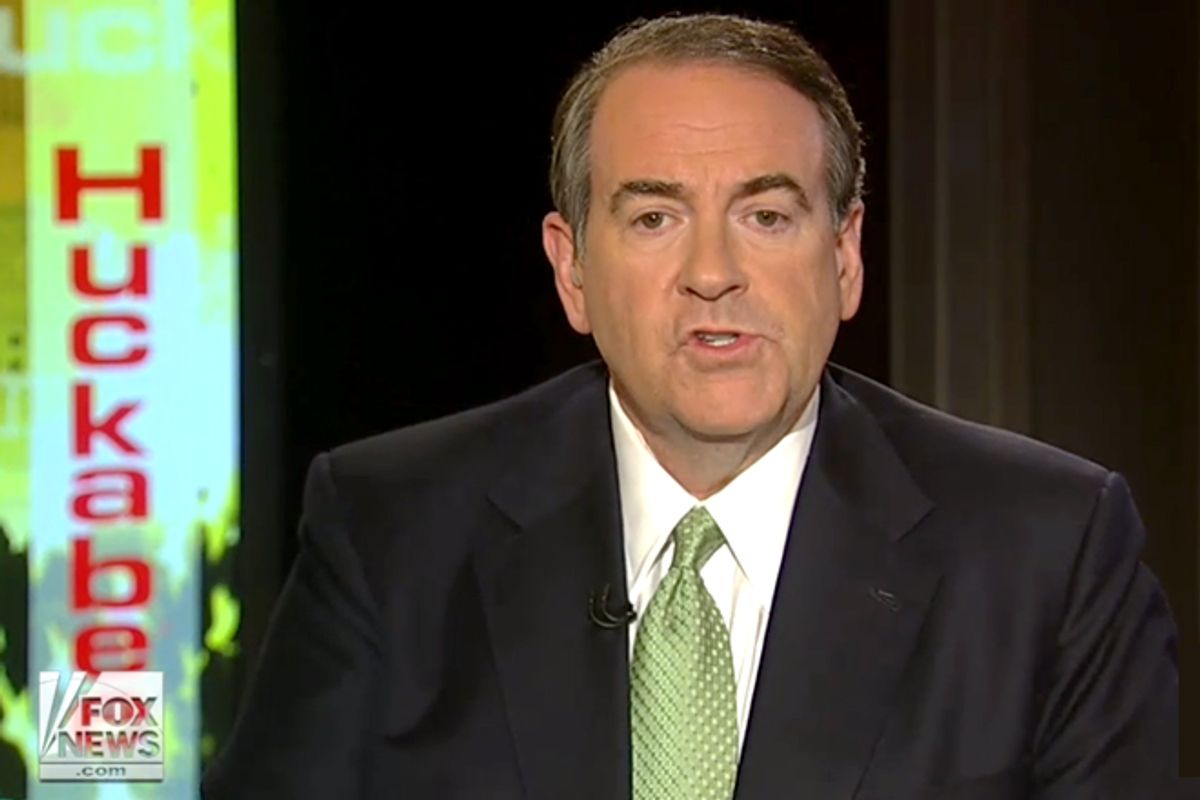 In the wake of the horrific massacre in Newtown, Conn., last Friday, it didn't take long for the gun apologist trolls to come out of the woodwork. Gun Owners of America's appropriately named Larry Pratt insisted that an unarmed school faculty was at fault, saying, "Gun control supporters have the blood of little children on their hands," and Texas congressman Louie Gohmert declared that "I wish to God [the principal] had had an M4 in her office." But it took former Arkansas governor and current Fox News windbag Mike Huckabee to really torpedo our national conversation to a whole new low. It was Huckabee who didn't just mouth off once, but kept mouthing off, clarifying his original vituperative inanity with ever more vituperative inanity from his apparently limitless supply.

First, on Friday, mere hours after the shooting, Huckabee appeared on Fox to muse, "We ask why there is violence in our schools, but we have systematically removed God from our schools. Should we be so surprised that schools would become a place of carnage?" He added, "Maybe we ought to let [God] in on the front end and we wouldn't have to call him to show up when it's all said and done at the back end." Because he's an opportunistic, self-promoting creep.

Then, over the weekend, on his own show, he took on "the predictable left" and its "vile and vicious reaction" to his statements. He said he wasn't merely talking about school prayer – oh, no, haters! "It’s the fact that people sue a city so we aren't confronted with a manger scene or Christmas carol … Churches and Christian-owned businesses are told to surrender their values under the edict of government orders to provide tax-funded abortion pills." On his Web page, he posted a version of his Fox monologue, in which he wrote, "We dismiss the notion of natural law and the notion that there are moral absolutes and seemed amazed when some kids make it their own morality to kill innocent children. We diminish and even hold in contempt the natural family of a father and mother creating and then responsibly raising the next generation and then express dismay that kids feel no real connection to their families or even the concept of a family." He also railed about how "our kids would rather have ear buds dangling from their ears, fingers attaching to a smartphone, and face attached to a computer screen" and "we teach that God was not involved in our origins, that our very lives are biological happenstances."

There you have it. It wasn't a mentally ill lunatic with easy access to military grade weaponry that caused one of the worst mass shootings in U.S. history. It was "abortion pills," iPhones, evolution and homosexuals.

It's a familiar Huckabee refrain. Last summer, after the deadly shooting in an Aurora movie theater, Huckabee went on Fox to say, "We don't have a crime problem, a gun problem or even a violence problem. What we have is a sin problem. And since we've ordered God out of our schools, and communities, the military and public conversations, you know we really shouldn't act so surprised ... when all hell breaks loose." This was right around the same time Huckabee was busily attempting to cleanse our great nation of the gay menace by declaring a Chick-fil-A Appreciation Day to support the chain's stance on biblical marriage and "Godly values."

Much like "end times" Bible "scholar" John McTernan, who back in October declared that Hurricane Sandy was the work of the gays, Huckabee seems to honestly believe that if we could just magically make everyone heterosexual and Christian, and while we're at it maybe do away with all the scientific evidence supporting evolution, terrible things would stop happening. He holds loving same-sex families more accountable for the violence in Connecticut than he does a broken mental-health system or the easy accessibility of guns or even Adam Lanza himself, whose name is not once mentioned in his Fox monologue.

It's an appalling smear of a wide variety of groups, and a breathtakingly ignorant view. And it's strikingly similar in spirit to Mitt Romney's response, during the presidential debates, to a question on gun violence — that "to tell our kids that before they have babies, they ought to think about getting married to someone — that's a great idea." It suggests that somehow prayer can prevent anybody from being mentally ill, that hetero marriage cures murder, and that having a manger in the town square can stop a gunman from blasting his way into a school. It's grotesque and hateful, even by Mike Huckabee standards. But if he's even remotely correct that we've all been so great at ordering God out of American life, what in hell do we have to do to successfully exile Mike Huckabee as well?