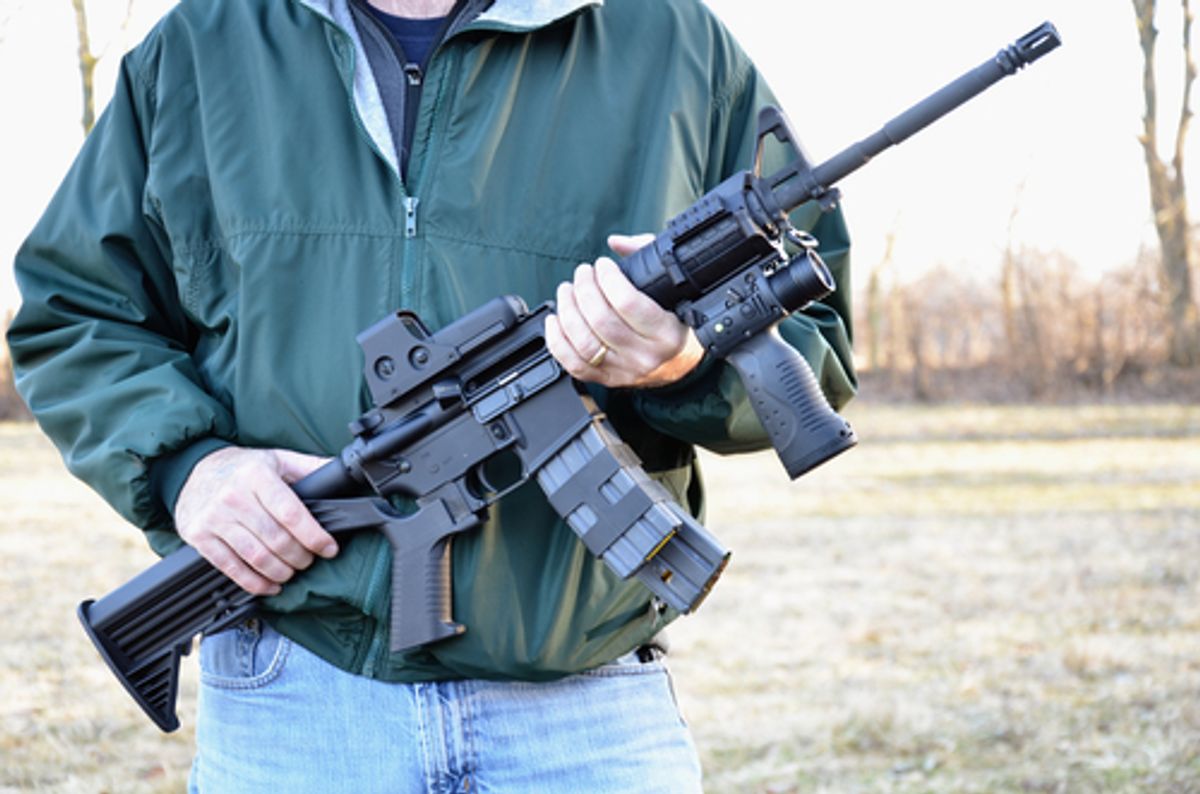 Yesterday, during a cable news discussion of gun violence and the Newtown school shooting, I dared mention a taboo truism. During a conversation on MSNBC's "Up With Chris Hayes," I said that because most of the mass shootings in America come at the hands of white men, there would likely be political opposition to initiatives that propose to use those facts to profile the demographic group to which these killers belong. I suggested that's the case because as opposed to people of color or, say, Muslims, white men as a subgroup are in such a privileged position in our society that they are the one group that our political system avoids demographically profiling or analytically aggregating in any real way. Indeed, unlike other demographic, white guys as a group are never thought to be an acceptable topic for any kind of critical discussion whatsoever, even when there is ample reason to open up such a discussion.

My comment was in response to U.S. Rep. James Langevin (D) floating the idea of employing the Secret Service for such profiling, and I theorized that because the profiling would inherently target white guys, the political response to such an idea might be similar to the Republican response to the 2009 Homeland Security report looking, in part, at the threat of right-wing terrorism. As you might recall, the same GOP that openly supports profiling -- and demonizing -- Muslims essentially claimed that the DHS report was unacceptable because its focus on white male terrorist groups allegedly stereotyped (read: offensively profiled) conservatives.

For making this point, I quickly became the day's villain in the right-wing media. From the Daily Caller, to Fox News, to Breitbart, to Glenn Beck's the Blaze, to all the right-wing blogs and Twitter feeds that echo those outlets' agitprop, I was attacked for "injecting divisive racial politics" into the post-Newtown discussion (this is a particularly ironic attack coming from Breitbart - the same website that manufactured the Shirley Sherrod fiasco).

The conservative response to my statement, though, is the real news here.

Let's review: Any honest observer should be able to admit that if the gunmen in these mass shootings mostly had, say, Muslim names or were mostly, say, African-American men, the country right now wouldn't be confused about the causes of the violence, and wouldn't be asking broad questions. There would probably be few queries or calls for reflection, and mostly definitive declarations blaming the bloodshed squarely on Islamic fundamentalism or black nationalism, respectively. Additionally, we would almost certainly hear demands that the government intensify the extant profiling systems already aimed at those groups.

Yet, because the the perpetrators in question in these shootings are white men and not ethnic or religious minorities, nobody is talking about demographic profiling them as a group. The discussion, instead, revolves around everything from gun control, to mental health services, to violence in entertainment -- everything, that is, except trying to understanding why the composite of these killers is so similar across so many different massacres. This, even though there are plenty of reasons for that topic to be at least a part of the conversation.

Recounting the truth of these double standards is, of course, boringly mundane, which means my comment on television summarizing them is an equally boring and mundane statement of the obvious. However, as evidenced by the aggressive attempt to turn those comments into controversial headline-grabbing news over the weekend, the conservative movement has exposed its desperation -- specifically, its desperation to preserve its White Victimization Mythology.

In this mythology, the white man as a single demographic subgroup can never be seen as a perpetrator and must always be portrayed as the unfairly persecuted scapegoat. In this mythology, to even reference an undeniable truth about how white privilege operates on a political level (in this case, to prevent a government profiling system of potential security threats even though such a system exists for other groups) is to be guilty of both "injecting divisive racial politics" and somehow painting one's "opponents as racist" -- even when nobody called any individual a racist.

In this mythology, in short, to mention truths about societal double standards -- truths that are inconvenient or embarrassing to white people -- is to be targeted for attack by the right-wing media machine.

Of course, just as I didn't make such an argument yesterday on MSNBC, I'm not right now arguing for a system of demographically profiling white guys as a means of stopping mass murderers (that's right, the headline at Beck's website, the Blaze, is categorically lying by insisting I did make such an argument, when the MSNBC video proves that's not even close to true). After all, broad demographic profiling is not only grotesquely bigoted in how it unduly stereotypes whole groups, it also doesn't actually work as a security measure and runs the risk of becoming yet another Big Brother-ish monster (this is especially true when a lawmaker is forwarding the idea of deploying a quasi-military apparatus like the Secret Service).

Additionally, I'm not saying we should avoid the complex discussion about myriad issues (gun control, mental health, violence in Hollywood products, etc.) that we are having in the aftermath of the Connecticut tragedy. On the contrary, I believe it is good news that those nuanced conversations -- rather than simplistic calls for punitive measures against a demographic group -- are able to happen, and it's particularly good news that they are persisting in the face of pro-gun extremists' best effort to polarize the conversation.

But the point here is that those tempered and nuanced conversations are only able to happen because the demographic at the center of it all is white guys. That is the one group in America that gets to avoid being referred to in aggregate negative terms (and gets to avoid being unduly profiled by this nation's security apparatus), which means we are defaulting to a much more dispassionate and sane conversation -- one that treats the perpetrators as deranged individuals, rather than typical and thus stereotype-justifying representatives of an entire demographic.

While such fair treatment should be the norm for all citizens, the double standard at work makes clear it is still a special privilege for a select white few. That's the issue at the heart of my comment on MSNBC -- and it is a pressing problem no matter how much the conservative media machine wants to pretend it isn't.