The star's latest comeback thriller may be poisoned by echoes of Sandy Hook. But don't blame "media violence" 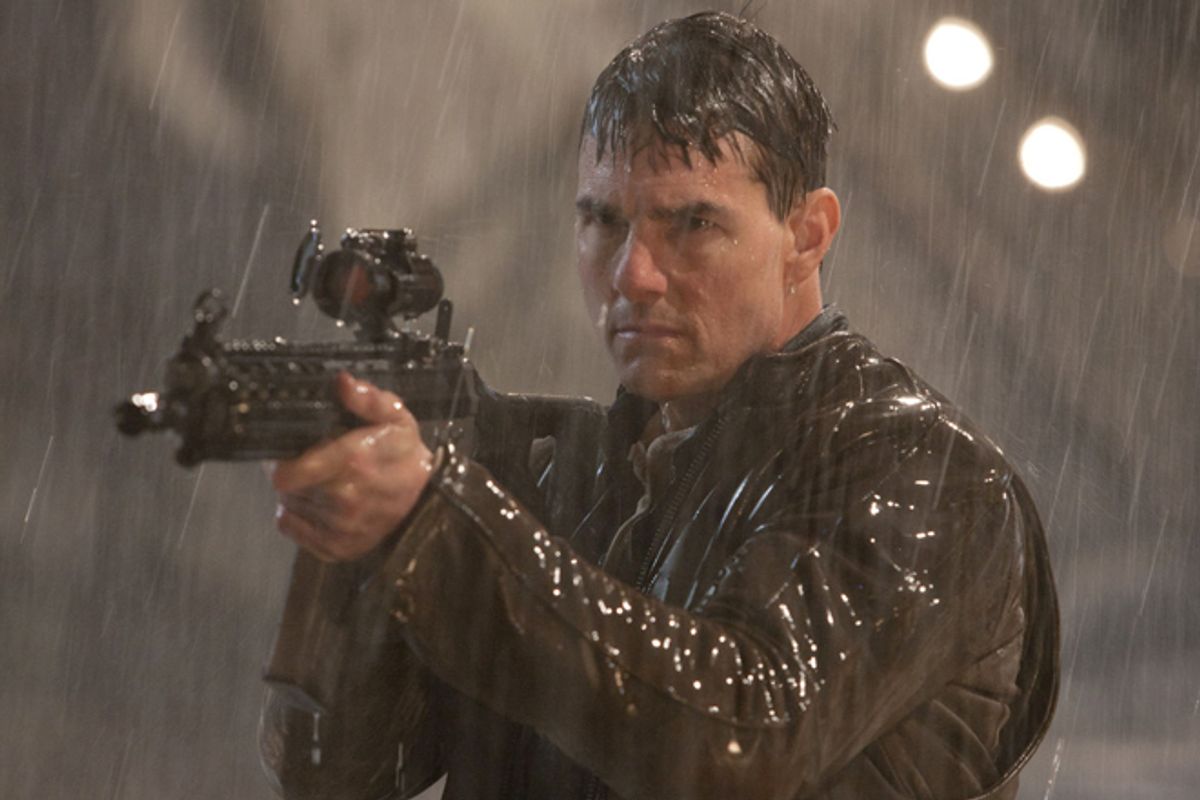 In the larger narrative of Tom Cruise’s late-career comeback, the new Paramount thriller “Jack Reacher” had a clear role to play – at least, before it became toxic, thanks to its accidental and superficial similarity to a real-life tragedy. It would be insulting to suggest that Cruise or Christopher McQuarrie, the film’s writer and director, are “victims” in any way, or that the commercial fate of a mainstream entertainment has any meaning in the face of the unbearable grief and tragedy of Sandy Hook. But it’s also useful to remember that Cruise and McQuarrie have done nothing wrong or unusual, beyond what people in Hollywood do all the time, which is to spin out violent and grotesque fantasies for our enjoyment. I think the problem “Jack Reacher” suddenly represents is more about us than about the movie. Confronted with our evident eagerness to consume simulated real-world horror as entertainment, we feel ashamed, at least temporarily.

In the wake of last winter’s huge international hit “Mission: Impossible – Ghost Protocol,” “Jack Reacher” was meant to underscore the fact that Cruise enters his 50s, implausibly enough, as a major action star whose screen charisma seems undimmed by his peculiar personal life. It was also meant to launch a potential hard-thriller franchise (and may yet do so), one that’s a notch darker and more violent than either the James Bond or “Mission: Impossible” series, with an almost limitless future. (British author Lee Child has churned out 17 Reacher novels to date, with no end in sight.) This is no more than a parenthesis, but it was also meant to relaunch Cruise’s creative partnership with McQuarrie (probably best known as the screenwriter of “The Usual Suspects”), who wrote the overpriced Nazi-era bust “Valkyrie,” wrote and directed this film and is likely to get the same assignment on the fifth “Mission: Impossible” picture.

Unfortunately for Cruise, McQuarrie and Paramount, what happened in Newtown, Conn., last Friday got in the way of all that fascinating Hollywood inside baseball, leaving us with the question of why we’re so gung-ho to watch movies like “Jack Reacher” in the first place. You see, the film (which is based on “One Shot,” Child’s ninth Reacher novel) opens with a harrowing sequence in which a lone gunman sets up in a parking garage overlooking the riverfront in downtown Pittsburgh. It’s around lunchtime on a beautiful day and he takes his time, inspecting the oblivious pedestrians through the scope of his high-powered rifle: Will it be the businessman with a bouquet of flowers, the attractive blonde, the mom or nanny with a baby, the harried-looking brunette with a pile of paperwork? Then he begins to shoot them, apparently at random – six shots, five people down.

This incident is a crucial and ambiguous plot point within a fast-paced thriller predicated on numerous twists. When the police arrest an unhinged ex-military sniper who did terrible things in Iraq, we know right away that he’s a fall guy. We suspect what Cruise’s Reacher will later establish, that the killings aren’t so random after all. So it isn’t about a school shooting, and the number of victims is below the level that would drive several days of national headlines. The movie is mainly about untangling a dark criminal conspiracy, and following Cruise’s amoral vigilante through a series of violent action set-pieces, not about a deranged loser with assault weapons or the slaughter of the innocents. (Although there is a wrenching subplot in which Reacher sends the suspect’s defense attorney, played by Rosamund Pike, to interview the victims’ family members.) So the connection is coincidental and circumstantial. Still, how would you like to be in charge of promoting that film, this week?

Everyone involved with “Jack Reacher” has pretty much said and done the right things since the horrible news broke from Connecticut, including lying through their teeth by insisting they’re not worried about the movie’s commercial fate. Paramount canceled the Pittsburgh premiere immediately and ramped down the advertising and publicity campaign; a gala screening at New York’s Lincoln Center, meant as the capstone to a retrospective of Cruise’s movies, has subsequently been scrubbed. In an interview with the Wrap, McQuarrie said he had no idea whether the Sandy Hook tragedy would affect his film at the box office, and didn’t care. “Whatever happens, I can't worry about how it affects me personally, because I get to go home to my children, so it just pales in comparison to what others are going through right now.”

Critics have been asked not to review “Jack Reacher” until Friday (that was a pre-existing embargo, not related to the Connecticut shootings), but in any case the question of whether or not it’s a good movie, considered in the abstract, is almost irrelevant now. The unwanted and unexpected symbolic importance it suddenly possesses has little or nothing to do with that. Arguably the kind of motion picture it is – an escapist Hollywood entertainment, which uses scenes of exaggerated violence as aspects of a thrill ride – is more significant.

“Jack Reacher” is nothing like, say, “We Need to Talk About Kevin,” a moody art-house film released last winter that could be seen as possessing an eerie resonance in the wake of Sandy Hook. That film by Scottish director Lynne Ramsay was specifically about the tormented relationship between an eccentric, independent-minded mother (Tilda Swinton) and her manipulative son (Ezra Miller), who may well have an autism disorder as well as an undiagnosed mental illness. It culminates in a schoolhouse massacre whose real target and intended audience is clearly the mother. But no one could possibly mistake the subdued tone and fractured chronology of “We Need to Talk About Kevin” for a Hollywood thriller; it was meant as a serious, wrenching psychodrama, and its audience was correspondingly very small.

McQuarrie and Cruise, on the other hand, had no intention of offering a commentary on the role of violence or guns in American life. If “Jack Reacher” is darker in tone than most American thrillers, that just means it offers vicarious experiences of terror, brutality and ersatz empathy along the road to the retribution dished out by its vigilante-style hero. To repeat myself, I’m not suggesting that the people who made this movie are guilty of anything, except promoting the wrong product at the wrong moment -- and thereby exposing appetites we would rather not think about right now. This isn’t the first American film (or the 200th) to use borderline-realistic violence to titillate us. If it had come out a month ago, or were about a serial killer rather than a mass shooter, it likely would not be facing the same P.R. debacle. In fairness, though, the damage now seems to be spreading throughout the industry: The Weinstein Co. has just canceled the Los Angeles premiere of Quentin Tarantino’s “Django Unchained,” a movie with a much higher body count than “Jack Reacher,” and both Tarantino and star Jamie Foxx have made awkward, semi-apologetic comments.

I’m sure we’ll hear some familiar rhetoric about the effects of violent entertainment and video games expressed in the wake of Sandy Hook (according to some reports, the shooter was an avid gamer). Unlike some of my colleagues in the culture-critic trade, I don’t think those discussions are totally irrelevant or out of bounds. But ultra-violent movies are not created by aliens conducting a nefarious mind-control experiment, or by “liberal elites” trying to pervert and debase red-blooded Americans. They exist because we eat them up and demand more, and it is undeniable that media violence has grown more graphic and intense even as violent crime has consistently declined. Maybe our chagrined reaction to “Jack Reacher” is actually a sign of psychological health: We understand the difference between real acts of spectacular violence and symbolic ones, but we can’t understand why we abhor the first but crave the second.