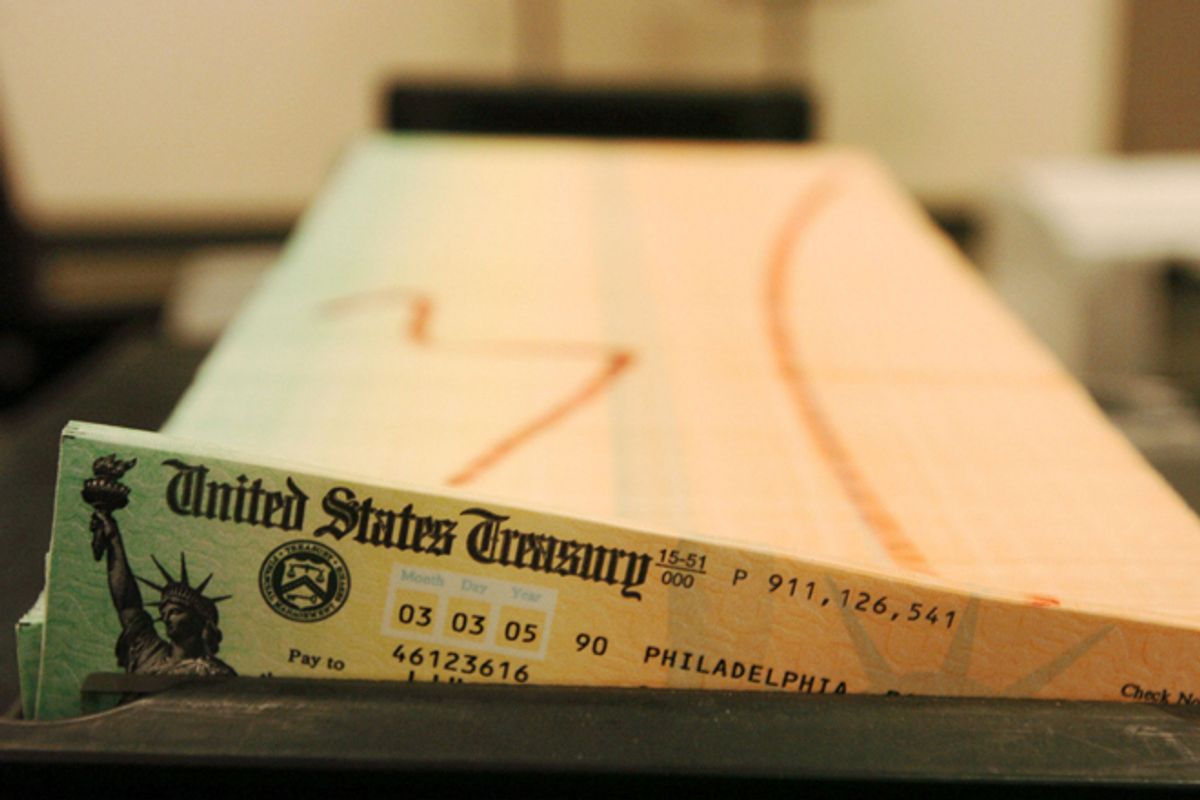 President Obama and House Republicans appear to be closing in on a deal to avert the fiscal cliff, but liberals are not happy with it.

Late last night, the White House offered a plan with two major concessions to Republicans. First, it would hike taxes on the wealthy, but only on income above $400,000, instead of the current $250,000 threshold. Second, and far more controversially, Obama offered to change the formula used to calculate Social Security benefits in a way that would cut outlays to seniors slightly while saving the program $225 billion over a decade.

The reaction from liberals, who have been demanding all along that social safety net programs be off the table, was swift and fierce. "This is a cut affecting every single beneficiary -- widows, orphans, people with disabilities and many others.  It is a cut which hurts the most those who are most vulnerable: the oldest of the old, those disabled at the youngest ages, and the poorest of the poor. Perhaps fittingly, this will be done during the holiday season, when the American people are distracted," Nancy Altman, the founding co-director of the advocacy group Social Security Works, said in a statement.

“They will cut Social Security not openly but by stealth -- through a cruel cut known colloquially as the chained CPI,” she added.

The CPI, or cost of living index, is used to make sure benefits keep pace with inflation, but there are lots of different ways to calculate it. The current measure, called the CPI-W, is generally accepted to overestimate inflation, but the liberals say the proposed alternative, the chained CPI, is too stingy. The chained CPI assumes seniors will adjust their buying habits in response to price shifts (e.g., if the price of oranges goes up, they’ll buy more apples), so they should be able to afford to take a haircut on benefit checks. But liberals say that seniors often barely make ends meet with current benefit levels, so cutting them more would be devastating.

Democratic Rep. Keith Ellison, the chairman of the Congressional Progressive Caucus, noted that 102 House Democrats have already said that Social Security changes should be kept off the table in these negotiations. “Everyone has a grandparent, a friend or a neighbor who relies on the Social Security benefits they earned to pay for medical care, food and housing. A move towards chained CPI would be a long-term benefit cut for every single person who receives a Social Security check,” he said in a statement.

The chained CPI would cut about $6,000 worth of benefits in the first 15 years of retirement for the average 65-year-old, and $16,000 over 25 years. “This change would be devastating to beneficiaries, especially widowed women, more than a third of whom rely on the program for 90 percent of their income and use every single dollar of the Social Security checks they've earned,” Ellison added.

Outside progressive groups, meanwhile, have been threatening to mobilize against the White House if entitlement cuts are included in a deal. "It would be a massive betrayal if the White House went back on its promise to both protect Social Security benefits and end the Bush tax cuts for the wealthiest 2 percent of Americans," Becky Bond, political director of CREDO, said in a statement

CREDO, the grass-roots organizing group funded by its cellphone business, has been increasingly active, mobilizing in 10 key House races during the election and leading a march against the NRA yesterday. "When it comes to the fight necessary to make his campaign promises a political reality, the president has said it's up to us to 'make him do it.' We're putting the president on notice that we will fight to stop any deal -- including the one on the table right now -- that goes back on his promise to oppose cuts to Social Security benefits and to end the Bush tax cuts for people making over $250,000 a year," Bond added.

Previously, progressive groups have told Salon that they would consider mounting primary campaigns against members who supported cuts to entitlement programs. In the past weeks, the groups, along with labor unions, have been running ads and sending emails to pressure members to leave social safety net programs alone.

MoveOn.org executive director Justin Ruben noted that Senate Majority Leader Harry Reid told reporters in November that Democrats were “not going to mess with Social Security.” MoveOn’s millions of members, he said, “see any fiscal agreement that cuts such benefits as a betrayal that sells out working- and middle-class families -- whether the cuts come via a chained CPI, increased Medicare eligibility age, or in some other form.”

The group sent an action alert to supporters this morning asking them to call Reid and tell him, "We need you to stop any deal that cuts Social Security benefits."

Stephanie Taylor, the co-founder of the Progressive Change Campaign Committee, said the chained CPI plan is "unacceptable."  A labor source called it “insanity.”

As Matt Yglesias pointed out this morning, the chained CPI is also unpopular, with 60 percent opposed to “changing Social Security to increase at a slower rate” and only 34 percent in favor.