7 states where gun sales are surging after Sandy Hook

Across the nation, the rush is on to grab assault rifles and large-capacity magazines -- even in Connecticut 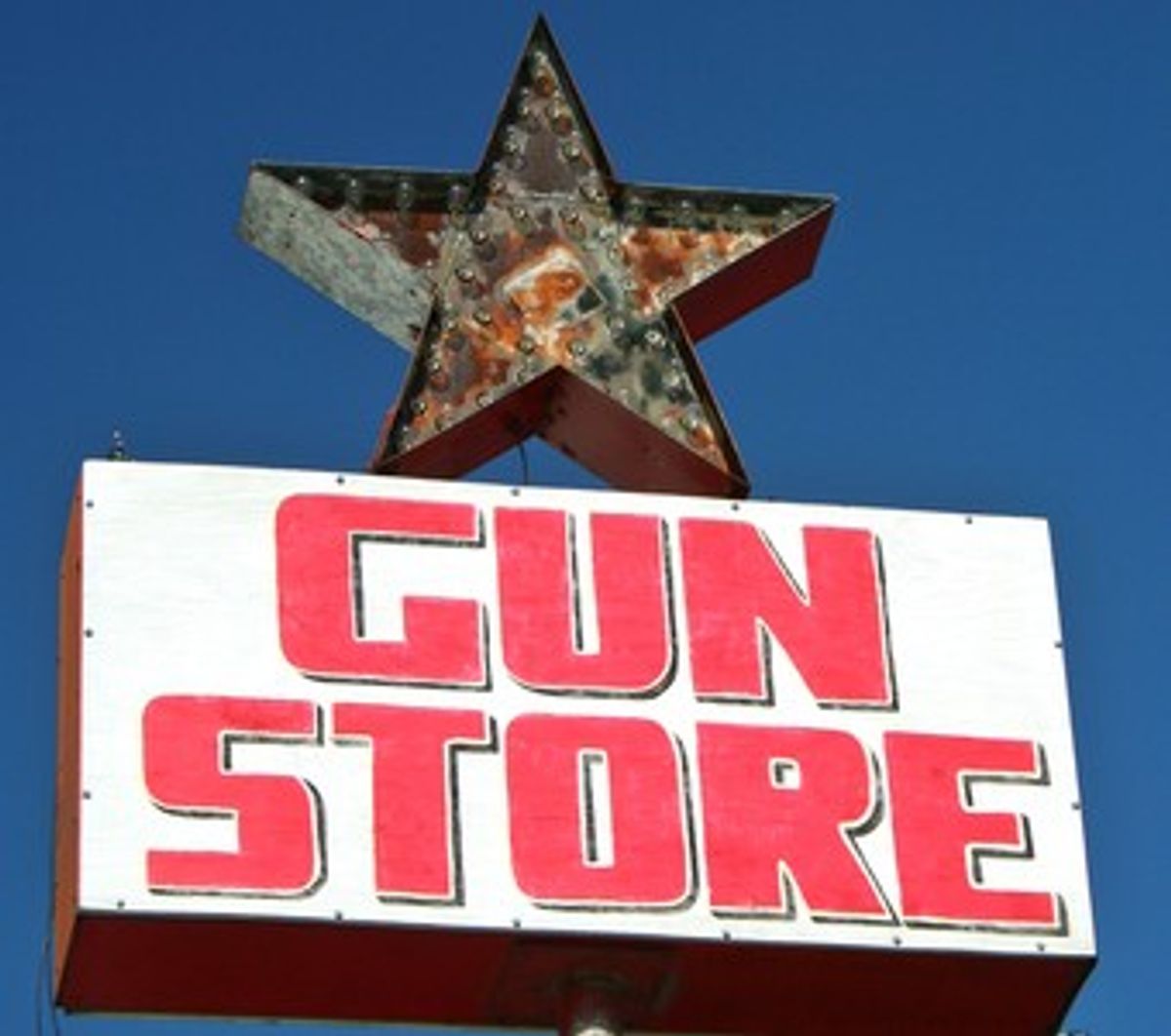 When word came of the dreadful school massacre in Sandy Hook, Conn., on December 15, many people stopped to pray and mourn. Others ran to the gun shop, and more are still coming, according to news reports from across the nation.

Apparently fearful from the moment the story broke that serious gun control -- particularly a ban on sales of the sort of assault rifle used by killer Adam Lanza, and the large-capacity magazines that allowed him to kill so many so quickly -- was in the offing, paranoids and gun enthusiasts rushed sporting goods shops in order to score those very items.

The right has long sold the line that President Barack Obama is coming for the guns of people who fancy themselves to be the "real" Americans, and it now appears that he might at least, after four years of inaction, seek to enact meaningful gun safety laws.

One major gun seller, the Dick's Sporting Goods chain, has suspended sales of types of several rifles, including the model used by Lanza at Sandy Hook Elementary School.

The National Rifle Association, after days of silence during which it even disabled its Facebook page, emerged again from the shadows yesterday, promising a press conference to take place on Friday, December 21.

The list below in no way comprises a complete accounting for all the states in which gun sales have surged; indeed purchases of firearms and applications for background checks are said to be at record highs across the nation since the tragedy in New England. Here we compile news reports from a few of those states.

1. Connecticut. The Nutmeg State's new designation as the home of one of the worst school massacres of its kind in U.S. history did little to deter gun enthusiasts from streaming into the state's gun-sellers on Friday.

From Brian Dowling of the Hartford Courant:

Doug Odishoo, owner of Delta Arsenal in Meriden, said he noticed an increased interest soon after the shootings. "As soon as this shooting happened on Friday, I almost sold out of everything. Saturday I couldn't keep up with it."

He said people walked into his shop, looking at the AR-style guns and saying, "I better get one before I can't."

The gun used by Adam Lanza was a Bushmaster AR-15. Dowling also reports:

At Hoffman's Gun Center in Newington on Tuesday, the parking lot was full and overflow vehicles were parked on the grass. It had been that way for two days.

At Connecticut Sporting Arms in North Branford, owner Arnie Willhite said Tuesday that the stream of people buying guns and ammunition have left little stock for him to work with.

"We had a little left going into today, and most of that is gone," he said, attributing the spike in demand to the perceived possibility of new gun regulations.

2. Viriginia. The site of a college massacre at Virginia Polytechnic Institute in 2007, where gunman Seung Hui-Cho shot and killed 32 people, the commonwealth is also known as a haven for gun enthusiasts, with one of the most lax requirements for concealed-carry license among the states that issue such permits. After the Sandy Hook shootings, Virginia registered a record high in background checks requests for gun purchases. From a report by Chelyen Davis in the Fredricksburg Freelance Star:

The day after a gunman killed 20 children and six adults at a Connecticut elementary school, Virginia State Police saw their highest-ever number of gun-purchase background checks.

A Virginia gun-rights advocate says that should be no surprise, given comments from national lawmakers about increasing gun restrictions in the wake of the shootings.

According to state police records, the agency processed 4,166 background checks to purchase guns on Saturday—the highest volume of transactions in one day since the program began in 1989.

3. Florida. It's the state known as the home of the infamous "Stand Your Ground" law invoked by George Zimmerman, the killer of Treyvon Martin, an unarmed African-American teenager who was gunned down by a self-styled neighborhood watchman. According to the news site of WSVN television in Florida, the state today issued its one millionth concealed-carry permit, which allows the bearer to carry a concealed firearm, marking the state's designation as first in the nation in gun sales.

Also the home of several recent mass killings, Florida saw the murders of two men and the wounding of 12 others outside North Miami's Funeraria Latina Emanuel funeral home earlier this year, and the 2010 shooting of seven women, four of whom died, at the Yoyito Restaurant in Hialeah.

From the WSVN report:

Following the Sandy Hook school massacre, gun sales are booming. "People are buying assault rifles, AR-15 magazines and more handguns than usual," said Walter Philbrick, owner of 911 Guns in Hollywood, Fla. "Me and my store staff would prefer not to have high gun sales than 20 kids alive in Connecticut, believe me," he added.

4. Texas. Home of the 1991 Luby's Cafeteria massacre, which left 24 people dead and 20 wounded at the hands of George Kennard, as well as the Fort Hood killings of 2009 and the Wedgewood church murders of 1999, the Lone Star state has seen its share of mass-murders. That knowledge did little to prevent a run on guns and bullets in the land of the Alamo. From a report by Javier E. David of CNBC:

The Sandy [Hook] shooting has "created a national shortage" of firearms and ammo, one Texas gun shop owner told CNBC, who asked not to be identified for fear of a backlash. "All of our suppliers are almost sold out of items across the board."

5. Colorado. In the state where the notorious Columbine High School massacre took place, record numbers of the background checks required for legal purchase of guns have been processed since the Connecticut shootings. From a report by Ryan Parker of the Denver Post:

The first day after news of one of the worst mass shootings in America, when a gunman killed 20 children and six staff members at Sandy Hook Elementary School in Newtown, Conn., requests to buy guns in Colorado surged.

A total of 4,154 background checks were submitted on Saturday, said CBI spokeswoman Susan Medina. Those figures topped the previous greatest number of background checks on Black Friday this year, when 4,028 were processed.

6. California. There's already an assault-rifle ban in effect in California, but that hasn't stopped citizens from the Golden State from rushing, since the Connecticut tragedy, to gun stores to buy whatever kinds of rifles are still legally available. California is no stranger to mass killings; in April, One L. Goh, a student at Oikos College in Oakland, shot and killed seven people at the college.

From a report, by Janet Zimmerman of the Riverside Press-Enterprise, on the gun rush that began immediately following Friday's tragegy in Connecticut:

Norris Sweden, owner of Warrior One Guns & Ammo in Riverside, said the background checks are very effective in regulating who can have guns. And most people who buy semi-automatic weapons do so for recreational purposes because the guns can be customized with different colored stocks and the addition of lights and lasers.

His partner, Mike Klein, said people are buying handguns and shotguns for home protection “but they are buying rifles because they think they might not be able to get them much longer.”

7. Louisiana. In the Bayou State, sales of guns and ammunition have been high on the upswing since Obama's re-election. But now, since the school shootings, they're off the chain. From a report by Tania Dall of WWLTV's Eyewitness News team:

"There are a lot of stock checks going on because the stores around this area are running out. So people are frantically trying to find something, somewhere that they can go purchase," said Mayer.

"Our main distributor is here in Louisiana, in Shreveport. They sell over 1 million guns a year at their distributor base and they're completely out of anything that would be considered an assault weapon," said Mayer.