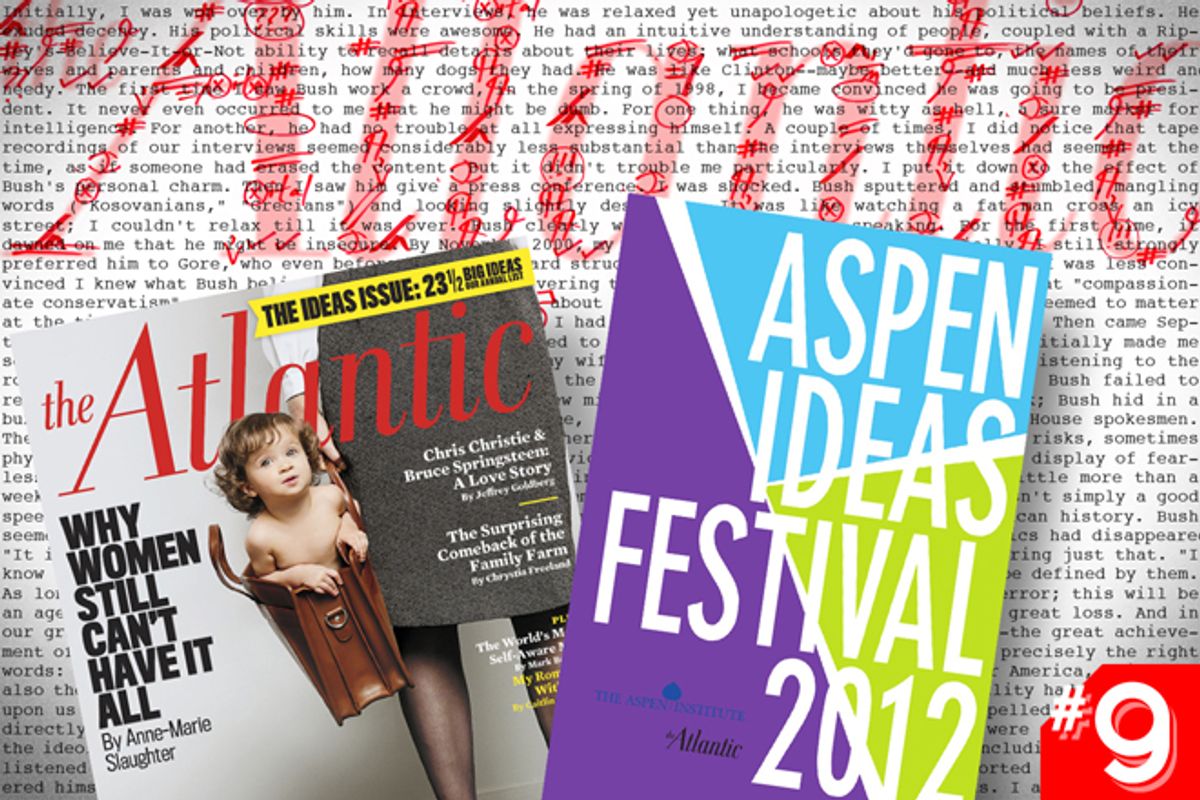 Magazines are great. I am a big fan of magazines. The Atlantic does a lot of things right, as a magazine. First of all, it makes money. Most magazines don't, really. I also give them credit for "figuring out The Web." Here is the secret of The Web: People like to read thoughtful people writing about and debating the issues of the day, and also they like really infuriating trolling. The Atlantic gives them both.

Here are some pieces from the latest issue: Jeffrey Goldberg on why more guns will solve gun control (counterintuitive!), Jessica Bennett and Rachel Simmons on how writing "xoxo" in emails is "feminizing the workplace," something on wacky Silicon Valley workspaces and offices. This is a fairly representative sample of the sort of thing in your average issue of the Atlantic.

In November, Michael Bloomberg was on the cover of the "Brave Thinkers" issue. (He is so brave, to have largely the exact same opinions as every magazine editor.) October was mostly dedicated to education reform. April brought us a tribute to underappreciated hero of the global economy Ben Bernanke. I'm not even picking from the women-baiting covers, here. We'll get to those.

The Atlantic's gender byline gap is awful -- 91 female bylines to 235 male in 2011 -- though most of the rest of the print media is no better. But the venerable old Atlantic does routinely devote its cover to a big piece by a woman. While the men write of war, technology, religion and politics, though, for the most part the women write about "Having It All," and whether that is either possible or advisable. Opinions differ! (Manly journal n+1's amusing summary of the typical Atlantic story on women: "Gently, like a good friend, the Atlantic tells women they can stop pretending to be feminists now.")

The women-baiting covers include Anne-Marie Slaughter on "Why Women Still Can't Have It All" (in "The Ideas Issue"!), Kate Bolick on why the ladies today refuse to get married (in "The Brave Thinkers Issue"!) and, of course, Hanna Rosin on "The End of Men." (In another "Ideas Issue.") Oddly, the magazine's anti-feminist feminist troll in residence, Caitlin Flanagan, hasn't had a big trolly cover piece, but she is waiting for you in just about every issue. The magazine recently started a blog dedicated entirely to reductive and controversy-sparking arguments about modern womanness, in case you can't wait for your monthly fix.

Who is this magazine for? Unmarried professional women who work in tech and worry about China, I guess? It is edited and published, though, by men of Washington, D.C. Publisher David Bradley spent hundreds of hours interviewing journalists across the country for the position of editor of the Atlantic, before deciding on St. Albans alum and New York Times Jerusalem bureau chief James Bennet. (Bradley was also the man who moved the Atlantic from Boston to Washington, after promising he wouldn't.)

Bradley and Bennet are both products of America's grandest joke, the Ivy League meritocracy. Bradley's dad was a spook and a P.R. pioneer. Bennet's brother is a United States senator. They're conscientious men with good intentions and all the right opinions. They're so predictable and boring. You can practically schedule a year's worth of Atlantic covers in advance: the China one, the women's shit one, the Israel one, the biannual tributes to Rich People Who Will Save America.

The problem is that "The Atlantic: The Magazine" is just a loss-leader for "The Atlantic: The Brand." The magazine exists to lend credibility and a slightly respectable sheen to the events. The Ideas Festival and the Ideas Forum and the Ideas Conference. The Small Business Forums and "Innovation Summit" and "The Atlantic's third annual Food Summit." These are not exactly 92nd Street Y panels. These are synergistic opportunities for industry leaders to meet thought leaders, for a paying audience of their peers. The Food Summit, for example, featured a number of Atlantic editors and contributors roped into friendly livestreamed chats with the CEO of the National Pork Board, the "Regional Business Head" of the Gerber Products Co., and Mario Batali. (Supporting underwriters: DuPont, Coca-Cola, Dole, Nestle, etc.)

The point of all this is leveraging independent commentary and journalism into yet another marketing opportunity and influence-peddling scheme for corporations, lobbyists, investors and people otherwise seeking to turn bullshit into gold. After years of putting on the Aspen Ideas Festival, the best Idea to come from the festival remains "throw a massive self-congratulatory circle jerk at a super-elite venue every year for CEOs to mingle with famous Washington hacks and vacuous would-be Gladwells."

(Also, just for the record, it's now been more than two years since Jeffrey Goldberg confidently predicted that we were mere months away from an Israeli airstrike on Iran.)