"Love, Actually" may be one of the nastiest, most depressing commentaries on love in film history 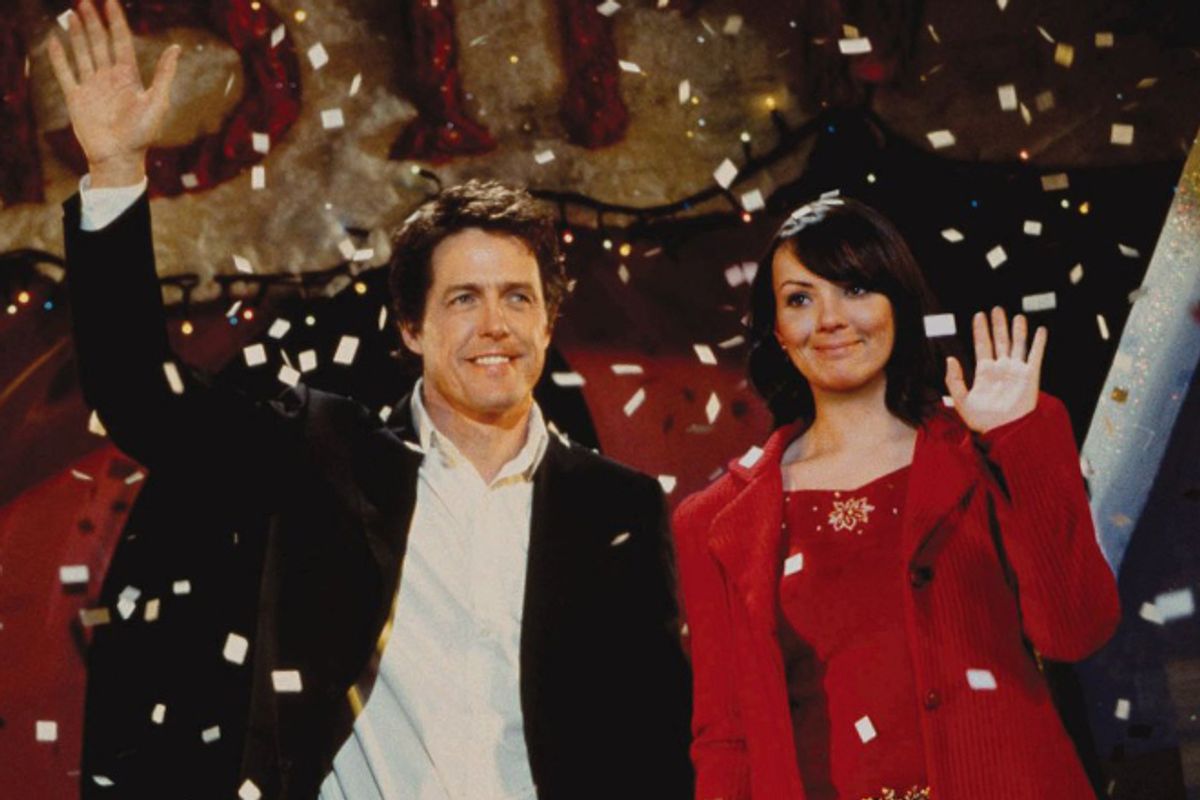 It's got an Anglophile's dream cast, a rousing version of "All I Want for Christmas" and an overstuffed romantic plot that takes place in the loveliest, coziest, most well-to-do version of London you've ever seen. Perhaps then it's no wonder "Love, Actually" has, in the nine years since its release, become something of a holiday classic. At this time of year it regularly crops up on cable and in Netflix queues. Slant calls it "the greatest modern Christmas movie," and Empire puts it in its top 10 "Best Christmas Movies Ever." Screw all that.

It's not just that writer-director Richard Curtis' jumbled-up stew of intersecting plotlines would make a Garry Marshall joint look minimalist. It's not the relentless deluge of hokey, forced scenes – like Hugh Grant's prime minister dancing wildly to the Pointer Sisters, or a declaration of unrequited love that's lifted  from a Bob Dylan clip. I love hokey! I'm still waiting for John Cusack to show up under my window with a boom box! I am physically incapable of channel surfing past any Sandra Bullock movie, ever! And when, a decade ago, I first heard there was going to be a movie involving my imaginary boyfriends Colin Firth, Alan Rickman and Liam Neeson, as well as my pretend BFF Emma Thompson, I was pretty sure that qualified as proof of the existence of a loving God.

Instead, the moment it reached theaters, I discovered that "Love, Actually" is instead one of cinema's nastiest, most depressing commentaries ever on "love," wrapped up like a velvet box from goddamn Kay Jewelers. Well, you never fooled me, "Love, Actually." I don't mind lighthearted holiday twaddle; I just don't like demoralizing, misogynistic holiday twaddle.

With the exception of Bill Nighy's witty plotline about an aging pop star's attempt to secure the coveted Christmas No. 1 hit, every one of the 85 other stories in the movie involves some horrible lesson out of the battle of the sexes playbook. If you were an alien watching "Love, Actually," you would come to the conclusion that what human British men really, really want are hot chicks who fetch them tea, put up with their dalliances, and don't speak English.

Which of the many story lines is most likely to make a reasonable human want to get drunk on lighter fluid? There's Colin Firth's – the one about a man who, betrayed by his cheating girlfriend, flees the country and immediately falls for his mug-brandishing Portuguese housekeeper. So pretty! So uncommunicative! And she has hot beverages! See also: the Hugh Grant story line, in which the prime minister falls for the assistant who brings him tea. Seriously, what is with you dudes? Do you not know how to boil water?

There's also the Alan Rickman story line, about the married man tempted by the unbelievably predatory secretary, and the heartbroken wife (Emma Thompson) faced with the choice to "stay, knowing life would always be a little bit worse." There's the Laura Linney one, about the noble woman who can't be with the man she loves because she has to care for her mentally ill brother. And doesn't that make an interesting contrast to the Liam Neeson plot, in which a very recent widower is rewarded for his emotional pain by hooking up with Claudia Schiffer. Claudia Schiffer!! There's also Kris Marshall's, in which a lonely, goofy-looking Brit flies to America to dazzle the ladies solely on the basis of his Britishness – and immediately scores a pile of insanely hot babes. And yet they call crap like this a "chick flick." I've seen less depressing Michael Haneke movies.

You'd be hard-pressed to find another movie – holiday or otherwise – that makes the case so convincingly for how miserable the lives of women truly are, and how all fired up awesome it is to be a man. A manly man who loves tea. And that's one big holiday lump of sexist coal that stinks, actually.