Newtown is my hometown

I went to school at Sandy Hook Elementary and Newtown High. Now I wonder if I can ever really go home again 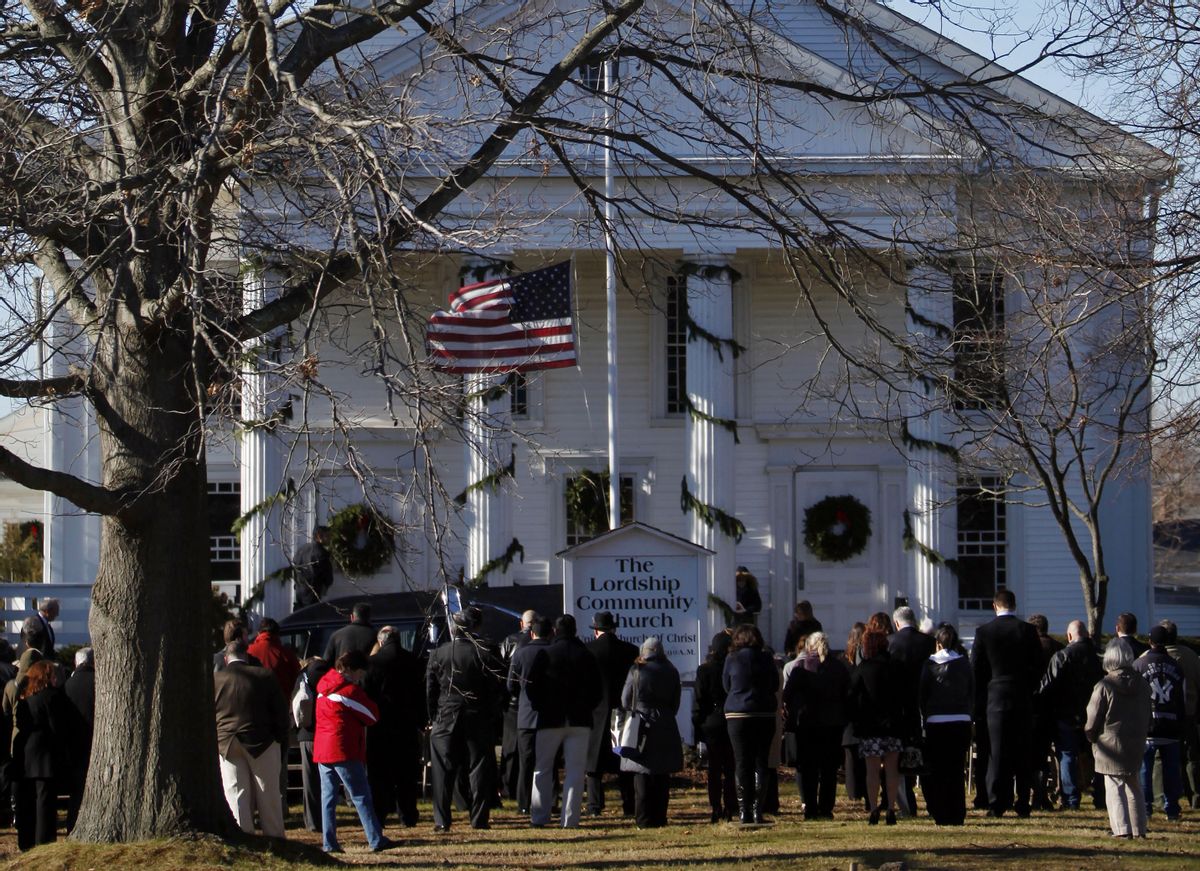 Mourners listen to the funeral service of Victoria Soto over loudspeakers in an overflow area outside Lordship Community Church. (AP/Jason DeCrow)
--

I DRESS ROBOTICALLY for a party friends had planned months ago, a party I now have no stomach for. I nod and smile because I am expected to nod and smile, in the midst of kind, genuine, and very smart people. At any other time I would feel lucky to be among them, but I am mostly not there, floating a few feet above myself, in the low-hanging unreality of butchery and loss. I do not mention Connecticut, even when it’s peripherally brought up. A few people express vague condolences or make easy jokes—both understandable as a way of dealing with an intolerable subject. But I do not respond. Speaking about it cheaply would seem like a betrayal.

This weekend I will fly to JFK—silently aware of the grim ballistic association—and then drive with my wife and eight-year-old daughter to Newtown, CT.

Because I grew up in Newtown. In fact, I attended Sandy Hook Elementary as a child, took the bus there every day for a year. I remember the halls and the long curving driveway. I remember footsteps painted on the macadam telling us where to go. They were supposedly left by the Jolly Green Giant—a seventies staple who has since faded into oblivion, even as a spokesman for peas. I felt comforted by those green outlines, and the cardboard bricks we stacked obsessively at recess, and the blue turtleneck that I wore like a uniform. I remember the soft light and the friendly teachers and the smell of disinfectant on hallway tile.

Which just makes it hurt all the more, this umbilical connection. That was my school, and my town. From Seattle I watched our president deliver a speech from the stage on which I also watched freshman orientations and junior assemblies and senior talent shows.

It was bizarre and disconcerting and without an acceptable context.

Like many of my classmates, I couldn’t wait to leave Newtown once I turned eighteen. I wanted to go somewhere bigger, more urban, more urbane. And although I did exactly that, over the years I have come to love Newtown from three thousand miles away. Each fall I look forward to a December reunion, to the thick stands of oak and pine, to untended fields and unpaved roads, a place both staid and fraught with history. In the summer, when it’s deeply humid and the ivy droops with ticks and the air is choked with mustard flower and skunk cabbage, it’s possible to raise your chin and stare off over the horizon without feeling ridiculous, a revolutionary in a tricorne cap, stern and unbowed.

But Newtown is far from perfect—part Norman Rockwell and part Roseanne, full of muscle cars and soccer fields, metalheads and Vineyard Vines, ridiculous columnar mansions looming over ramshackle lots. A Manhattan wealth increasingly blooms through the remains of a long-shuttered manufacturing past. The implausibly bad-ass White Birch eventually gave way to Cumberland Farms and then Big Y, not entirely for the better. Nevertheless, Newtown is an honest and genuinely beautiful place.

Typing that sentence makes me want to send my love to all my friends and family and former neighbors, to the victim’s families, to the parents who received that unimaginable phone call, to everyone who lives, lived, or ever grew up there. We are forever tied together, for both the best and worst of all possible reasons.

That alone is an essay. It is haiku for loss, without the seven syllables of absolution. There is no pretending horror can be spun into a redemptive cliché.

To lose a child, particularly in a violent manner, is beyond reckoning. Or belief. Or typing a worthy sentence about. When I sat down at my keyboard after a few days of emotionally curling up on the basement floor, I wanted to write something imbued with meaning. I wanted to comfort and inspire and transcend. But I find that I don’t have the words. Or the presumption to even try and conjure them.

In the meantime, something vital has clearly changed. For the first time in my life, at long last, it seems as if there may be some movement on gun control. Just as the embrace of gay rights and the beginning of the end of the drug war was inexorable, we have entered an era of relative sophistication in America—one which sits uneasily alongside certain ugly but unavoidable truths. The recognition of global warming may indeed arrive after the globe has irretrievably warmed, but it too will become an accepted part of the national discourse. The opposition will fall away as it always does—to be remembered dimly as the province of gun lobbyists and oil subsidizers, embodied in revanchist dinosaurs like Wayne LaPierre, Mitch McConnell, and Antonin Scalia.

But change is not here today, and so is too late to have averted the shattering events of last Friday. Not that any particular legislation or creeping cultural enlightenment would have prevented Adam Lanza from accessing his mother’s weaponry, let alone giving in to whatever virulent strain of madness gripped him on that morning. But it is possible, had a reasonable set of gun access and mental health laws been in place for even a decade prior, that the culture of mass violence in America might have shifted—just enough to spare—toward the rational.

I know many people who say none of this should even be discussed until all the children of Sandy Hook Elementary have been interred and properly mourned for. And I understand that completely. Part of me feels the same way. But another part argues that not a minute can be lost. That the sort of raw anguish and outrage this incident has galvanized—precisely the sort required for any meaningful discussion, let alone political movement in this seemingly broken country—is vital and fleeting.

There are 300 million guns in America, and more are coming. I understand the desire to acquire one, as well as the relatively hysterical fear that the government might arbitrarily decide to take that right away. If I lived somewhere like Montana or New Mexico, far from a reliable police response and among large animals that have remained stubbornly undomesticated, I might own a gun myself. But it would almost certainly be an unfashionable lever or bolt-action rifle. It would not be semi-automatic. It would not have extended magazines. It would not be loaded with armor-piercing bullets.

What we need, just as much as sane, baseline legislation, is to start seeing these events for what they really are. “Tragedy” suggests infrequence. “Mass shooting” implies a random and unpredictable deed. “Act of a madman” pretends that we bother to identify the mad, let alone spend the money to treat them. “An expression of evil” lets everyone off the hook, as if it were something metaphysical, preordained, or inscrutably Nietzschean. It is exactly the opposite. These incidents are the direct result of institutionalized, heavily funded, and cravenly protected invitations to slaughter.

There is a very specific brand of American behavior with a recent, iconic precedent (Columbine), regular copycat behavior (thirty-six incidents since 1999), and a winking cinematic echo chamber (name the movie where the anti-hero fires a million rounds and everyone just ducks). This easily identified pattern has increased in lockstep with the martyr/body armor/assault-fantasy culture that has otherwise permeated young male consciousness. All six of the adults killed at Sandy Hook were female. And almost all the perpetrators of earlier shootings were emotionally impotent young white males with elaborate, arcane, and ultimately unexplained grievances. It’s the same story, told repeatedly, an invocation of sullied names that Adam Lanza currently stands at the head of. Quiet loners. Bullied. Friendless. A suspicion of mental illness gone untreated and ignored. A family’s lack of health insurance vs. the relative affordability of counseling.

I can’t get the image of children cowering out of my head.

Not five angry shots. Not a dozen. A cold hundred. Two hundred. A level of madness that is all-encompassing and terrifying in its airless, emotionless void.

The price of freedom in America has always been the willingness to do what is right in the face of profit, from Eugene V. Debs to Ralph Nader. While it is our greatest failing that we do not more often subvert the clearly self-serving, it is also our greatest strength that we sometimes overcome entrenched interests to do what is moral and ethical in the face of rote opposition.

Every statistic has already been cited, every study referred to, every polemic argued, politicized, and abused. The same tired pro-gun bromides are trotted out, easy to refute but impossible to impart to those who refuse to traffic in logic. We are alone among the “civilized” nations of the world in that we hide behind a cynical, intentional misreading of our own Constitution to justify access to the tools of slaughter. Despite knowing nothing of our Founders’ true intent—save the fact that colonial militias were armed with single-shot muskets—we can no longer accept the fallacy that assault rifles, semi-automatic handguns, extended magazines, and military-grade ammunition have a place among the citizenry.

Further, we cannot accept that an exploding and for-profit prison system has been allowed to replace, at vast taxpayer expense, a facsimile of national mental health care.

Those who continue to argue against reasonable regulation, who continue to insist that they will not trade a small infringement of their “rights” in order to end a cycle of violence and madness that is only accelerating are from this point forward complicit in the murder of our children.

Newtown will eventually recover, without ever quite being the same. Its name is now etched into pundit shorthand, a cheap metaphor for tragedy: Columbine, Aurora, Virginia Tech, 101 California. It is truly wrenching that my town—our town—will be both a national reference as well as (just possibly) the catalyst for new and meaningful change.

Until then, twenty young names will have borne the burden of our inaction and obstinacy.

This country deserves better. The parents of Sandy Hook Elementary deserve better. Six teachers deserve better. A small town’s group of first responders—police, fire, and ambulance, who had to walk into a building and face something no one should ever have to see—they deserve so much better.

There is no argument or excuse left.