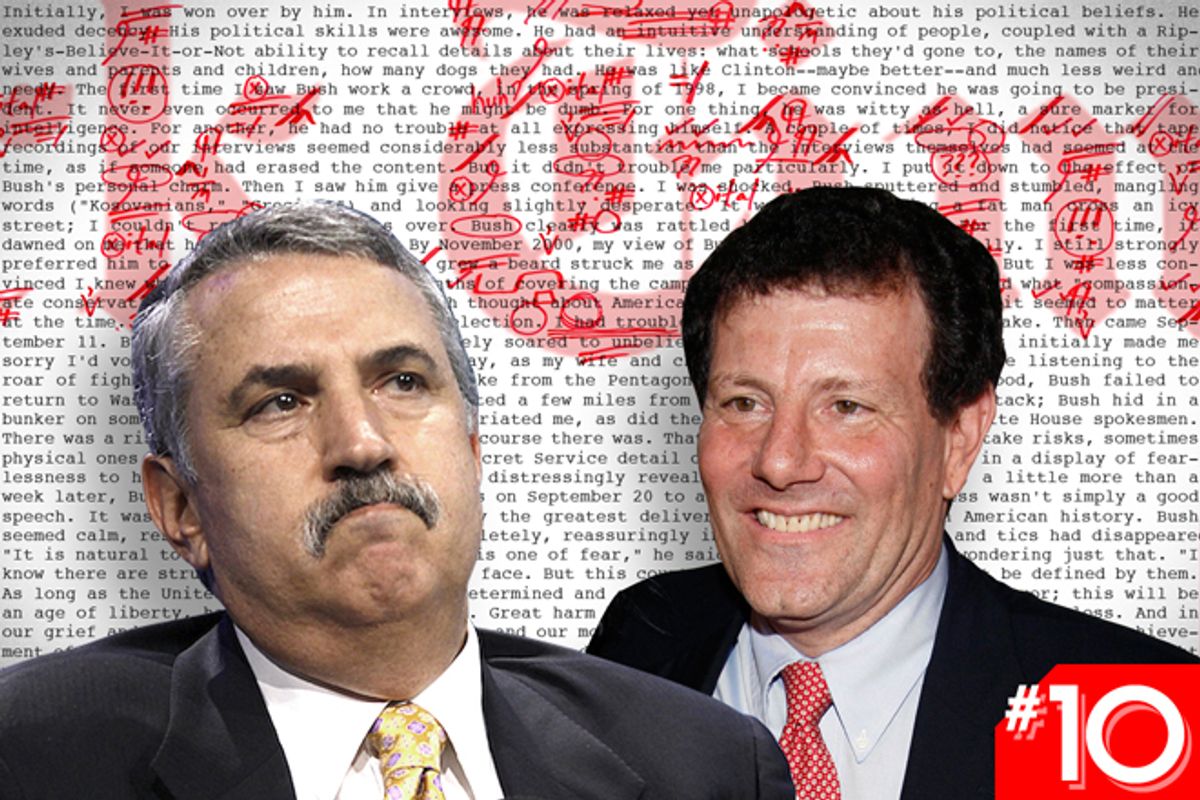 The New York Times is America's Last Newspaper, and because of that it is the recipient of a lot of grief that it doesn't always entirely deserve. Conservatives think it's the Daily Worker. Liberals blame it for Iraq and Bush's second term. Young people refuse to pay to read it.

The truth is, it is a good newspaper. It has great reporting that it spends a bunch of money on. It has a crossword puzzle. It has David Carr.

But the Times has a columnist problem. The problem is that "New York Times columnist" is one of the very few legitimately powerful positions in the field of "writing down your thoughts on politics," in terms of audience and influence, and for years now the Times has decided that Maureen Dowd calling every female politician in the nation a bitch is a good use of that platform. Obviously not all their columnists are huge problems. Paul Krugman is right about everything, Gail Collins is hilarious and Charles Blow's election columns were impressively, 100 percent bullshit-free.

But the rest of their stable, ugh. Do Bill Keller and Frank Bruni really need to grace us with their opinions each week? Ross Douthat is essentially a parody of the sort of conservative Times readers would find palatable, now that David Brooks is a sad shell of his former self, listlessly summarizing random bits of social science and pretending the Republican Party is secretly moderate and reasonable.

But two men, in their own ways, sum up the real problem with the Times: how it shapes the opinions and biases of the sort of fantastically wealthy liberal-leaning elites who legitimately do have a great deal of power, in this country and abroad. And no columnists are as essential for the Aspen Ideas Festival class as Thomas Friedman and Nick Kristof.

But this was a particularly bad year for Tom. You should seriously reread his column on Americans Elect. It's amazing. "What Amazon.com did to books, what the blogosphere did to newspapers, what the iPod did to music, what drugstore.com did to pharmacies, Americans Elect plans to do to the two-party duopoly that has dominated American political life — remove the barriers to real competition, flatten the incumbents and let the people in." And that's why we now have president-elect Huntsman.

In November, he proposed nominating Secretary of Education Arne Duncan for secretary of state. Why? Because technocrat Davos types love education reform (and they think teachers' unions are the moral equivalent of Hamas). These two paragraphs perfectly encapsulate the empty, buzzword-heavy, repetitive non-style that makes Friedman so beloved by barely literate MBAs or whoever it is who's buying his books by the truckload:

There is a deeper point here: The biggest issue in the world today is growth, and, in this information age, improving educational outcomes for more young people is now the most important lever for increasing economic growth and narrowing income inequality. In other words, education is now the key to sustainable power. To have a secretary of state who is one of the world’s leading authorities on education, well, everyone would want to talk to him. For instance, it would be very helpful to have a secretary of state who can start a negotiating session with Hamas leaders (if we ever talk with them) by asking: “Do you know how far behind your kids are?” That might actually work better than: “Why don’t you recognize Israel?”

“The biggest issue in the world today is growth, and the world is divided into two groups — those who get it and those who don’t,” said Michael Mandelbaum, the Johns Hopkins University foreign policy expert. “If you’re dealing with the Middle East, it might actually be helpful to have someone who can tell some of the parties why they are going in the wrong direction and how their problems are not what they think they are, nor are their solutions.”

Yes, Friedman used the exact same vague generalization to start two consecutive paragraphs. And yes the second paragraph's quote is obviously the source for everything Friedman wrote in the first paragraph, making the first paragraph unnecessary. And yes, Friedman thinks that would be a constructive thing to ask Hamas. "Have you considered instituting a strict standardized testing regimen in Gaza????"

Then Friedman said Michael Bloomberg should be president because Friedman saw a broken escalator in Washington and had poor cellphone service on a train. And he said that "the lesson of Iraq" -- meaning the war he relentlessly pushed for -- was that every country should be occupied by the United States until they turn into Switzerland, like Iraq did.

Friedman is certainly the worst actual human being employed by the New York Times. But his vileness often lets his colleagues off the hook. Like Nicholas Kristof, crusading opinion columnist hero. While Thomas Friedman travels the globe attending conferences and making obscene amounts of money speaking to billionaires for an hour, Nick Kristof travels the globe rescuing sex workers by getting them arrested and then attempting to find them jobs in sweatshops to produce our cheap clothing. Oh, he also makes a lot of money talking to people, though his $25,000-$50,000 speaking fee is a bit less than ol' Tom Friedman's. (The Times only allows its staff members to accept fees from educational and nonprofit groups, and requires staffers earning more than $5,000 in a year to submit a detailed accounting of their appearances. Both of these rules were almost universally ignored until Friedman got everyone in trouble in 2009 by accepting $75,000 to speak to a California government agency.)

Kristof's self-aggrandizing heroism is what's made him a journalism superstar, and largely immune to the sort of bitching that his opinion page colleagues receive, because he is Out There Doing Stuff instead of opining from behind a desk. But while he is indeed Out There, his years of Raising Awareness have, as far as I can tell, largely succeeded in making a bunch of rich old Times readers Aware of Nick Kristof.

His writing always features morally unambiguous black-and-white heroes and villains. The heroes are frequently rescuing helpless maidens. Kristof declines to see complexity in every great crisis he tackles, and largely refuses to acknowledge that money and American "intervention" are frequently as much the cause of so many of his Causes as the potential solution. As Teju Cole put it:

His good heart does not always allow him to think constellationally. He does not connect the dots or see the patterns of power behind the isolated "disasters." All he sees are hungry mouths, and he, in his own advocacy-by-journalism way, is putting food in those mouths as fast as he can. All he sees is need, and he sees no need to reason out the need for the need.

He is also the Times Africa "expert" who rarely demonstrates any special knowledge of the history, culture or society of any of the African nations he parachutes into to save innocents.

Just the headlines and teasers of some of his columns from this summer show how quickly this style of do-gooder rich liberalism lapses into self-parody:

Big Chem, Big Harm?
Chemicals in everything from canned food to A.T.M. receipts could affect you, your children and your children’s children.
August 26, 2012, Sunday

War Wounds
This veteran wishes he had lost a limb. Instead, he has to watch himself lose his mind.
August 12, 2012, Sunday

Obama AWOL in Syria
Why is Obama passive as thousands of Syrians are dying? Top strategists want him to act now.
August 08, 2012, Wednesday

Blissfully Lost in the Woods
Here’s a little advice for the overburdened and overconnected: take a hike.
July 29, 2012, Sunday

The dateline on that last one: "ON THE PACIFIC CREST TRAIL, Ore." Obama should do something about Syria and also oh isn't backpacking through Oregon delightful, everyone should do it.

Kristof's reliance on anecdote and personal narratives above all else occasionally lead him to deeply stupid conclusions, like his column this December arguing that we should cut a meager poverty program designed for low-income children with disabilities because he heard secondhand that some people weren't teaching their kids to read in order to qualify for it. Illiteracy isn't actually what qualifies kids for SSI -- actual doctors must submit proof of physical or mental disability in order for the children to qualify for the $600 that is making them so "dependent" -- but even if you accept the truth of Kristof's anecdote, his conclusion barely makes sense. Why would cutting SSI and using that money to pay for early childhood education make more sense than just paying for both and making sure some random parents in Kentucky aren't committing fraud? (Kristof's also a school reformer, natch.)