Two criminals, one a self-described "Moorish national," busted out of a high-rise lockup using a rope of bedsheets 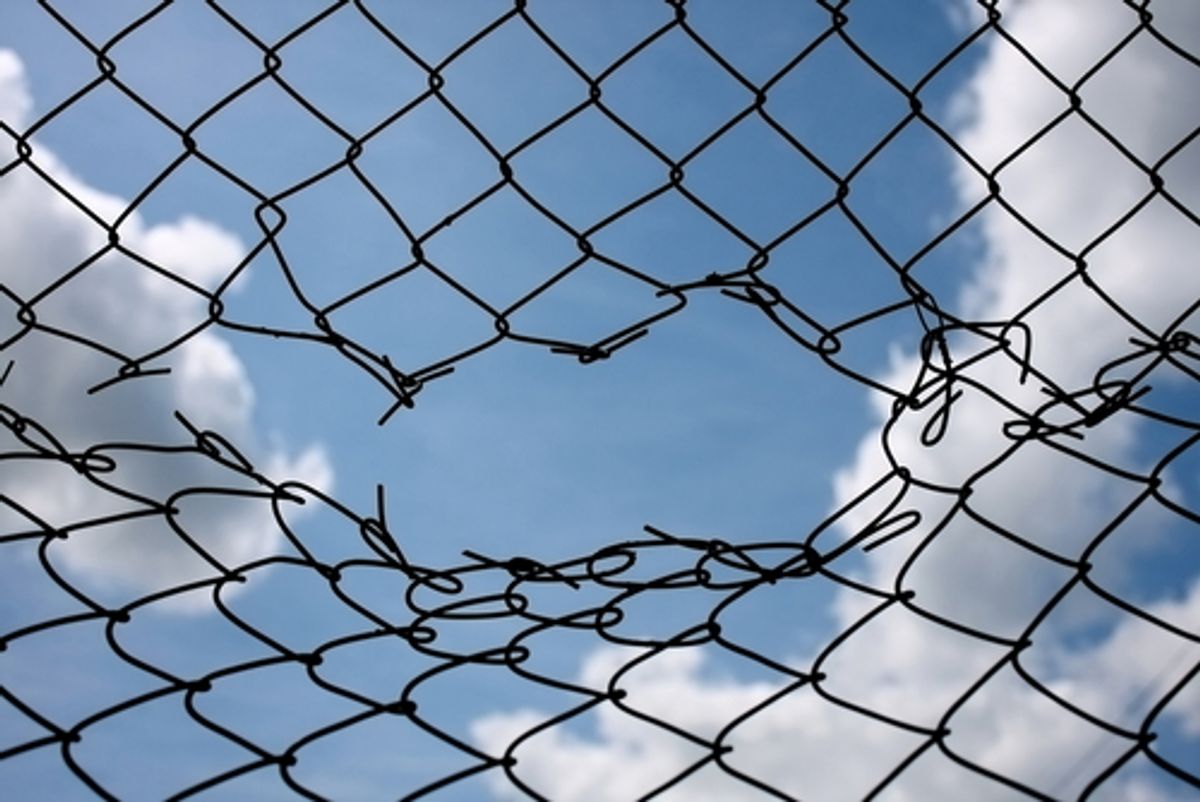 More than 24 hours after the escape, the robbers, Kenneth Conley, 38, and Joseph Banks, 37, the self-proclaimed “Moor,” remained at large today with dragnets of heavily armed federal and local law enforcement officers on their trail.

The men were last seen in a south suburb and are believed to be traveling together. The FBI offered a $50,000 reward this morning for the escapees’ capture, which is about $550,000 less than Banks reportedly took in just two robberies where, brandishing a pistol, he vaulted bank counters and stuffed stacks of money into a bag.

So-called Moors are typically black nationalists who, like their kissing cousins in the antigovernment “sovereign citizens” movement, deny the jurisdiction and authority of the government. For the Moors, that is based on the theory that they are the real sovereign natives of North America, and the whites who came later and their government have no right to rule them. As a rule, the various Moorish groups have produced little or no violence, even if their view of history is unique.

The sovereign citizens movement, on the other hand, originated in a white supremacist ideology that basically said that America was given by God to the white man, and that as a result no government can impose its laws and taxes on them. (Today, the white supremacist aspect of the ideology, which said that black people could not be sovereigns, has been largely forgotten and many sovereigns are black.) Sovereigns are best known for filing bogus court documents, including property liens against their enemies — so-called “paper terrorism.” Several have murdered law enforcement officials in just the last few years.

Some Moorish groups, including the Moorish Science Temple of America that was founded in 1913, strenuously protest being lumped in with sovereign citizens, saying that they are, in fact, citizens of the United States.

Banks, who fired his lawyers and represented himself at his bank robbery trial last week in federal court, reportedly told the judge that he was a “Moorish National from the Republic of Illinois.”

At one point during his trail, Banks had to be strapped to a wheelchair after trying to leave the courtroom.

The jury quickly found Banks guilty. He was awaiting sentencing, scheduled for late March, when he escaped yesterday. After being convicted, according to the Chicago Sun-Times, Banks vowed that he would be “seeking retribution” and assured the judge, as he was led out of the courtroom, “You’ll hear from me.’’

FBI spokeswoman and Special Agent Joan Hyde declined today to provide details of the improbable jailbreak, which came on a busy weekday morning just a few blocks from Chicago’s bustling financial district. “Right now our focus is locating and apprehending them,” she said.

According to local media accounts, however, the escape was straight out of Hollywood.

When jail employees arrived at work at around 7 Tuesday morning, they noticed a lengthy piece of rope made out of bedsheets dangling from at least 15 stories up the 26-story Metropolitan Correctional Center, on the southern edge of the Loop. According to some accounts, the escapees may actually have descended 20 stories on the rope, which was fitted with twin harnesses to hold the men.

After a quick headcount, the authorities realized that Banks and Conley, who were cellmates, were gone. A slim hole had been cut out of a window.

Banks, described in the Sun-Times as “one of the most prolific bank robbers in Chicago history,” was known as “The Second-Hand Bandit” because he wore thrift store clothes as a disguise.

He had a lot of time to plan his escape. He had been in the federal lockup since shortly after his arrest in 2008.

Conley arrived at the jail in the fall of 2011. A former strip-club floor host, according to the paper, Conley was not nearly as accomplished a bank robber as Banks. Conley got less than $4,000 from his holdup.

In a scene that could have come straight from Clint Eastwood’s “Escape from Alcatraz,” the two convicted robbers had stuffed clothes and sheets under their blankets to make it appear they were sleeping.

Then they apparently squeezed through the narrow broken window, shimmied down the fragile rope of bed sheets and disappeared into the Chicago morning, headed, perhaps, to the sovereign “Republic of Illinois” — wherever that is.