Curse of my birthing hips

My body promised warmth and maternal comfort, but I wanted nothing to do with a family 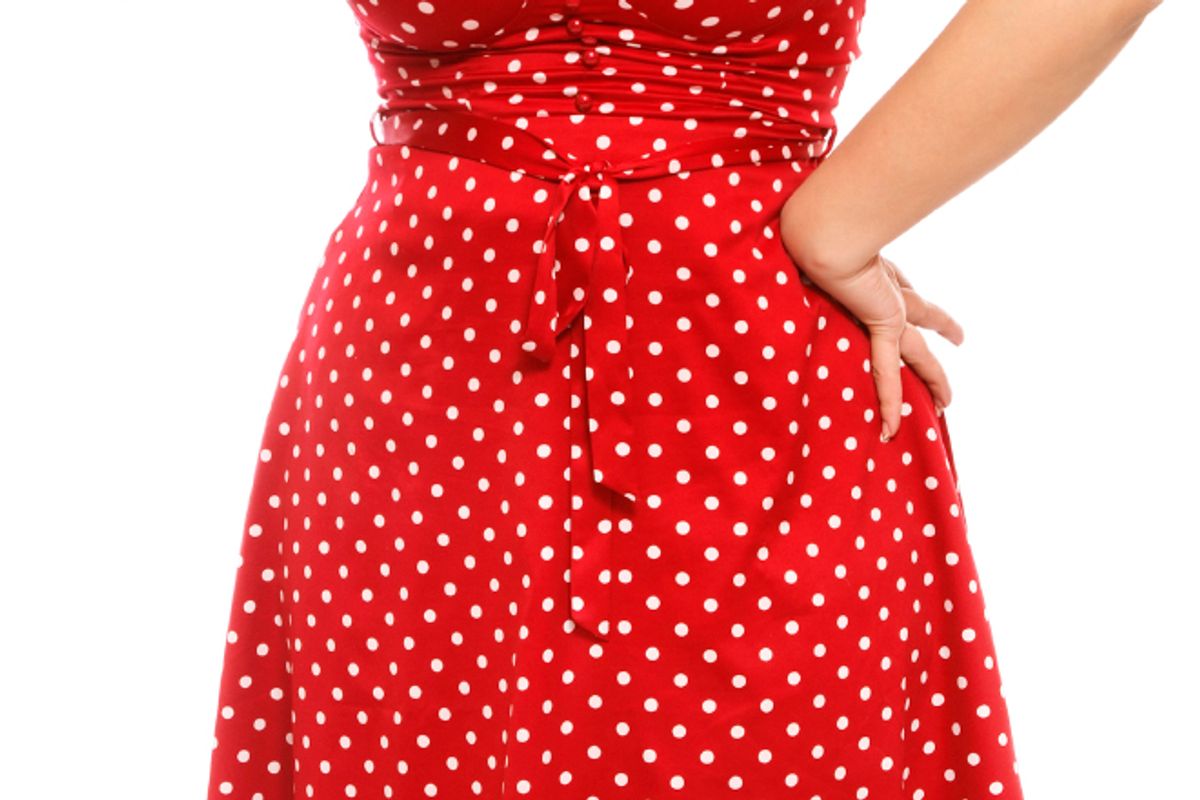 "Body Issues" is a personal essay series about obsessions over our own shape.

I first heard that I had childbearing hips before I even got my first period. One of my middle school classmates — a beauty with a coltish build — assessed my dumpy, dough-pale body in the locker room, and declared, without malice, that I had what her grandmother called “birthin’ hips.”

At 13, I had no idea what my thick hips had to do with birth, but I was terrified by the prospect of having to care for (another) someone else. I was the loud one who drew my father’s ire — and his fists — away from my brother. I was my mother’s “little hero”: the one who powdered her black eyes and told her she was still pretty, the one who swallowed her secrets so she could shimmer in the eyes of her fellow PTA members. She taught me to draw and to drive, to bake lasagna that would make men lick their plates and to fill up with Crystal Light and water so I wouldn’t be too hungry, wouldn’t eat too much of my own food.

She’d been, in her words, “flat as a board” until plumping up while carrying me; then, she said, she “looked like a spark plug.” Her body was as soft as her will; she yielded to buttered biscuits and apologies whispered in the dark. When I was a teenager, both of our bodies embarrassed me equally. I remember the sight of us in one fitting room mirror: Her hips, narrow; her belly puckered by a Caesarean scar. My hips mocked hers with their abundance.

I hated the way that skirts rode up my hips; hated those awkward moments staring at chairs and wondering whether my hips would fit between the arms; hated how my hips would spread wide against bus seats, edging away anyone who might’ve sat beside me.

My hips got me labeled “Blubber” and “Slut” in equal measure; I hated what they evoked: the dimpled fertility totems we studied in history class; the Nick-at-Night housewives whose hips were swaddled in white aprons of surrender. But my mother’s narrow hips indicted her. She’d struggled to bring me into the world, and struggled to raise me. When my brother was born, I danced stuffed hippos in front of his high chair and cut the crusts off sandwiches while my mother promised my father that the baby “just needs to cry it out,” that “he’ll stop soon,” while she trimmed the fat from his steaks and fetched his beer.

Whenever I imagine what it would be like to care for a child of my own, I see that long scar in the middle of my mother’s hips: skin that remembers the violence of birth.

My body memories held no happy endings: no baby to gurgle and coo when I rocked her; no first grader coming home with stick figure family portraits. I grew old before I grew up. I glutted myself with peanut butter and saltines, sourdough rolls topped with chunks of cheddar and fistfuls of chips to smother a rage I couldn’t afford to feel. There were moods to soothe and a brunt to bear. My body expanded to match the force of my anger, and no part of me blew up like my hips. They veered between womanly and matronly, and I couldn’t afford to be either. I couldn’t become my mother: lipstick and split lips, pot roast on the table and plates thrown against the wall.

I wanted to look like the girls who teased me, as slim as their cares in the world. They had sleepovers at their houses and fought with their parents over curfews and car rides with boys; they’d never endured a broken nose over a B- on a math test. They could breeze into any store in the mall, pull anything off the rack, and dazzle. To me, they had the luxury of being girls: the luxury of being cared for, of laughing easily and loving without fear. They crested a tide of limitless possibility, unencumbered by burdensome hips.

I tried to whittle down with pills, but they made my heart lurch. I was a failure at forcing myself to throw up, and too impatient for starvation. And even during my fleeting moments of success—when my bust and belly would fit into a size 12 (at best) — my hips wouldn’t cede an inch. My body promised warmth and maternal comfort, even when I wanted nothing more than a life without anyone to be responsible for.

But the axis of the earth ran between my shoulders. I could never slough off my sturdiness, my compulsive reliability. Years after I moved out, I still take my mother’s calls, though I often can’t stand the sound of her voice, a babyish lilt that turns even the mildest statement — “We’re having chicken and potatoes on Sunday” — into a question she’s afraid to have answered. I let her prattle on about how great it is that Daddy (always her word for him, never mine) gave up drink, but now he takes too many pills.

Though I swore I’d never be like her, I inherited her appetites. We both went for weak men. She’d tell herself that my father was tired and stressed from working so hard, that he had “moods.” I told myself that the men I cared for were just fragile, too talented for their own good. They didn’t leave bruises, but they left marks. Deadbeats who believed they were dreamers; perpetual grad students who thought that reading Sexton and Plath gave them a pass for suggesting that a gym membership was “a gift you’d give yourself”; men who drank all their calories but still volunteered me to cater their department’s holiday party.

Being needed was all I knew of love. At least, that’s how I excused flame-out after flame-out. I was, after all, only in my 20s twenties, my mid-20s, my late 20s, and fumbling in love was par for the course. I watched my Facebook feed become a living scrapbook of engagement announcements and wedding portraits and babies’ first Christmases and realized that I picked these men because they could never give me those things. I would end up where I always did, where I feel safe and free: alone in a rented apartment, cooking for one and cuddling the dog.

Co-workers and neighbors, friends of friends and even therapists have told me that I’ll regret this. They give me the same-old about experiencing life anew. They say that they didn’t even like kids until they had theirs. They suggest that the best way to truly heal from my upbringing is to bring up children of my own. And the women almost always joke that I’m wasting the gift of my birthin’ hips. I’m regaled with tales of pelvic bones that threatened to snap like old twigs and immediately assured that I wouldn’t have those problems. I’d be a natural.

And yet I cringe whenever I see an old classmate change her “employer” on Facebook to “MOMMY” or, even worse, her child’s name. I feel like a woman who has clawed up from quicksand, whose relief can’t conquer her residual fear. I know that it’s condescending to rue the supposed smallness of these women’s lives; it’s flat-out hypocritical to even think of them as small to begin with. As women, we’re damned if we do and damned if we don’t; always a Stepford wife or a Miss Havisham. Most of the women I’m honored to call friends have been emboldened by motherhood: They wouldn’t hesitate to raise their voices, or their fists, to protect their children.

I survive my mother’s failures every day; sometimes, I reach a stalemate with myself and let go of the anger. Years ago, I met a man I would cling to far too tightly for far too long, and he was too stunned with a recent grief to want me in the same way. He would cry on my couch and eat so much of my homemade pasta that his lips were always stained with sauce, but he couldn’t promise me anything. And I was, in hindsight, oddly empowered by this: He may not have loved me, but he needed me, and there was more security in being needed than in being adored. His sorrows would crowd everything else out of my heart; I’d never need another excuse for not starting a family of my own.

Then, one day, he lowered his head onto my lap, gripped my hips with a drowning man’s sudden strength, a strength that should have hurt me. I had never been touched so desperately, so intimately: not even when my own mother rubbed salve over my cuts and kissed me goodnight. A fault line broke open from my heart to my hips, and in rushed everything I’d fought so hard, and for so long, against. Though he would soon number among my regrets, in that moment, I felt for him, from him, the love that perhaps only mothers can know: a love that asks for nothing while giving everything.