The NRA head may have genuinely had a change of heart, but history suggests we should be wary 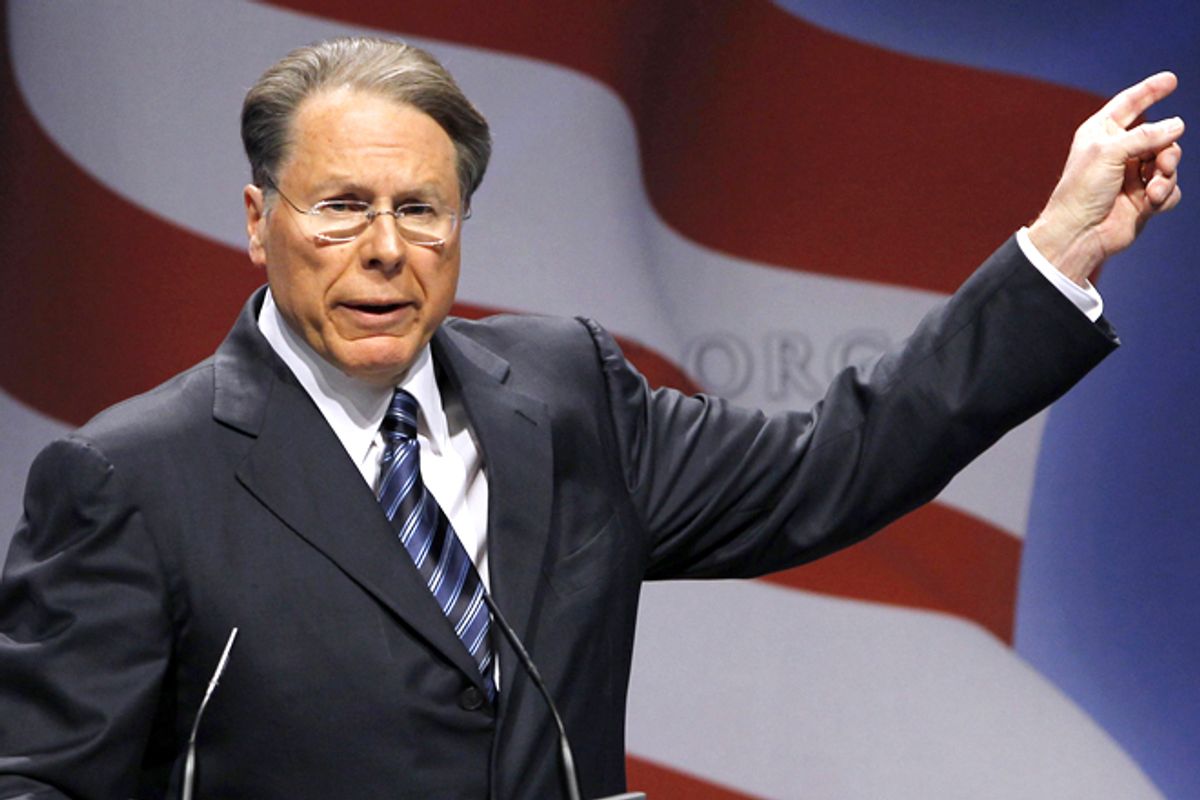 Tomorrow morning, the NRA will break its silence on the Sandy Hook massacre with a press conference where it promises to “offer meaningful contributions to make sure this never happens again.”

And on Sunday, NRA head Wayne LaPierre will appear on "Meet the Press" to continue the gun lobby’s damage control efforts after a shooting that has galvanized political leaders to push for stronger gun laws. “The group’s abrupt shift in communications strategy shows something unusual is happening inside the powerful group: it’s feeling heat,” Politico’s Anna Palmer reported today.

If history is any guide, tomorrow and on Sunday, LaPierre -- who has been at the NRA for over 20 years -- will likely sound reasonable and open-minded about guns, and perhaps announce an evolution of thinking. Maybe the killing of 20 innocent children has genuinely moved his group away from its reflexive opposition to any kind of gun restrictions. This would certainly be welcome from an organization that has dominated the gun control debate so thoroughly over the past decade that it has effectively stamped it out.

But anyone covering the press conference tomorrow or watching "Meet the Press" on Sunday should take whatever LaPierre has to say with a big grain of salt. He has a history of saying one thing to the press, while striking an entirely different chord with his base. As Ronald Reagan would say, trust but verify.

As far as we can tell, the last time LaPierre appeared on "Meet the Press" was in 1995 after the Waco, Texas, fiasco. LaPierre had sparked controversy for writing a letter to NRA members  accusing federal agents of being “jack-booted government thugs.” He went on "Meet the Press" to clarify the remarks, but only made things worse when he said the agents wear “Nazi bucket helmets and black storm trooper uniforms to attack law-abiding citizens.” Two weeks later, he was forced to apologize, saying, "If anyone thought the intention was to paint all federal law-enforcement officials with the same broad brush, I'm sorry and I apologize.”

From that experience, he seemed to have learned the lesson to keep the red meat he throws to conservative audiences out of the mainstream media, where his message is more refined and reasonable.

For instance, after the shooting of former Rep. Gabby Giffords last year in Tucson, Ariz., President Obama wrote an Op-Ed in the Arizona Daily Star calling for strengthening the regimen of background checks for people who buy guns. When the New York Times sought LaPierre’s response, he “sounded at times like the White House” during the interview. “The president, in his column, cited the same policy areas Mr. LaPierre mentioned as fertile ground for consensus,” the Times’ Jackie Calmes continued.

But at the Conservative Political Action Conference in Washington that year, La Pierre had a different response to the Giffords shooting: "Government policies are getting us killed,” he said, referring to gun-free zones that prevent concealed weapon permit holders from bringing their guns inside (the parking lot where Giffords was shot was not such a zone and a citizen was indeed armed).

Later, in September of 2011, LaPierre told the Florida spinoff of CPAC that Obama had intentionally avoided doing anything on guns in his first term in order to lull gun advocates into a false sense of complacency. “They’ll say gun owners -- they’ll say they left them alone,” LaPierre said, “But it’s a big fat stinking lie! … It’s all part of a massive Obama conspiracy to deceive voters and hide his true intentions to destroy the Second Amendment in our country.”

Before Obama took office, LaPierre told members that he was sure the newly elected Democratic president would launch an unprecedented war on guns. But when CNN asked him about this kind of rhetoric in 2009, he downplayed the fear: "Given his past record before he announced for president, I think people are suspicious of what the Obama administration might do," he said -- an entirely reasonable statement.

In old TV interviews, LaPierre is always extremely well prepared and sticks to the facts, presenting himself as a passionate and informed, if aggressive, advocate. He engages in none of the conspiracy theorizing that dominates his rhetoric before friendlier crowds, and avoids discussing anything that might touch on the paranoia he’s happy to stoke in other settings.

For example, in a 2009 appearance on CBS’ "Face the Nation" -- one of his few Sunday show bookings in recent years -- he completely dodged the question: “Do the people of the NRA really believe that the president of the United States is trying to essentially overturn the Second Amendment?” LaPierre has said exactly that and in almost as many words on many occasions in the past, but instead he pivoted to attacking the media for misreporting the number of guns entering Mexico from the U.S.

After Hurricane Katrina, the fact that police disarmed citizens in the aftermath struck a nerve with gun rights advocates who saw all kinds of conspiracies in the move, on everything from national gun seizures to FEMA camps. But LaPierre, appearing on ABC’s "World News Tonight," managed to make the post-Katrina gun paranoia sound pretty reasonable: "Citizens were completely on their own against robbers, against looters, and if they didn't have a firearm they were completely defenseless against the bad guys."

A few months later, the media was shocked when a draft brochure to be sent to NRA members from LaPierre and another NRA leader was leaked to Wonkette. The letter, which sadly sounds quotidian by today’s standards, warned that "shadowy coalitions” of "one-world extremists” -- including the U.N., animal-rights “terrorists” and illegal alien gangs -- were preparing for a “profound and foreboding confrontation” with gun owners. "History teaches us that their assault will be precipitated by a high-profile criminal act, like an L.A. riot, a D.C. sniper or a schoolyard shooting. All it takes is a rare, tragic anomaly to roll out a blood-red carpet for the gun-ban crowd ... We'd better be ready,” it read. (This, keep in mind, was when President Bush was in the White House and Republicans controlled both houses of Congress.)

Now we have such a moment, but LaPierre is unlikely to deliver a fiery performance at tomorrow's press conference about how Obama and his buddies at the U.N. are coming to take everyone's guns.  Recognizing the political delicacy, there’s no doubt LaPierre will be on his best behavior. Meanwhile, 15 days ago, he told Glenn Beck’s program that Obama was planning to carry out a "siege on the Second Amendment in this country like we've never seen before.” He’s also warned that U.N. “globalist vultures” are trying to take away our guns with a firearms treaty.

While it’s not clear if LaPierre actually believes any of this stuff, what is clear is that for years, he and the NRA have been pushing paranoid black helicopter conspiracy theories to incite the base. They probably have little reason to stop now -- especially since real gun control may actually happen this time.