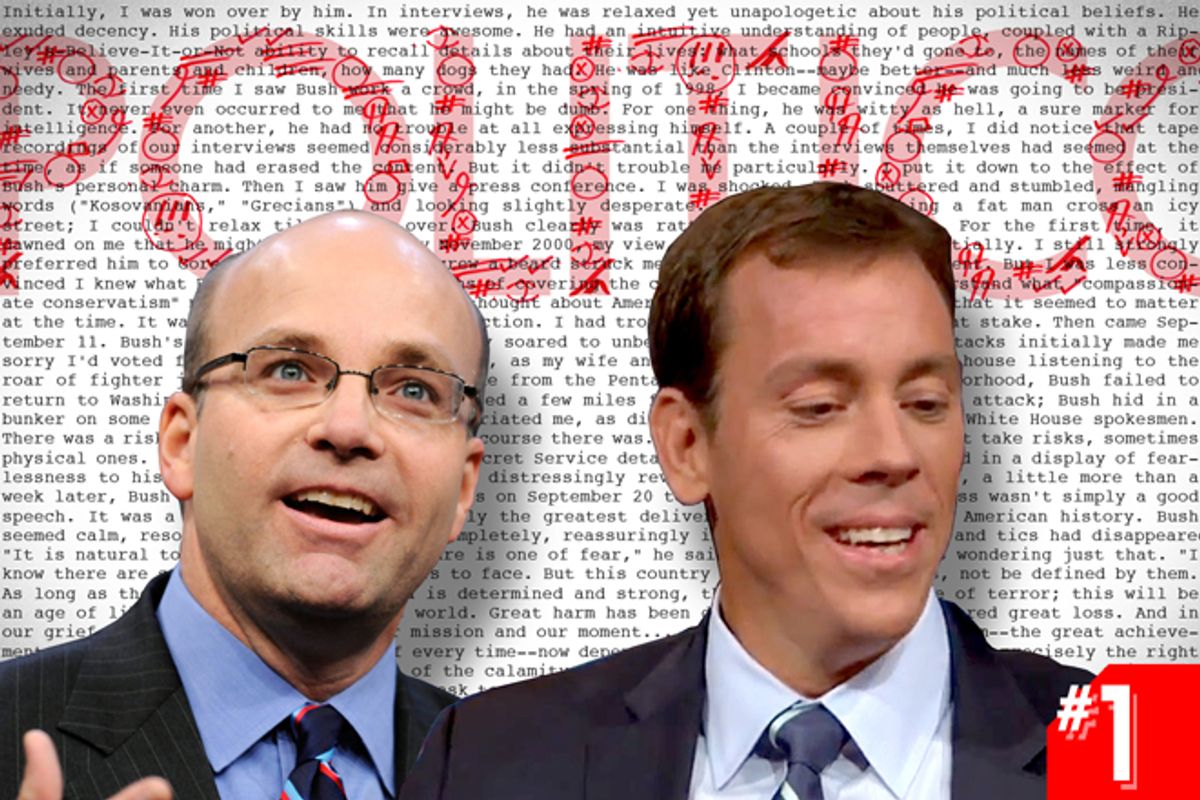 I have written tens of thousands of words on what, precisely, is wrong with Politico. But I can put the case much more simply here: It's Mike Allen and Jim VandeHei.

VandeHei is the co-founder of Politico, and Allen is the organization's biggest star. Each morning Allen collects a bunch of links to day-old news stories and emails them to thousands of people, and for this he is paid a fortune. VandeHei is the guy who gives Politico its obnoxious, pseudo-macho ethos, with the shouty memos and nonsense about "metabolism." Allen exemplifies the sort of political journalist who thinks his job is faithfully reporting what mendacious professional liars tell him, while also usually protecting their identities. VandeHei thinks neutrality requires occupying a space precisely between Breitbart and the Huffington Post. Neither would probably understand if you tried to explain to them that supporting whatever any CEO says or effectively endorsing Erskine Bowles for president is actually a violation of political "neutrality."

When you see a joint Allen-VandeHei byline, you can safely expect the worst. When fellow Politico big shots John Harris and Jonathan Martin write a piece, they report on politics. When Allen and VandeHei write, they craft narrative. If the narrative bears no little relation to reality, or is simply self-serving spin from a professional political operative, no matter: Now the narrative is "out there," because Politico is proud of its ability to create its own buzz and then report on that buzz.

Allen and VandeHei's 2012 campaign was a wild roller-coaster ride of shifting narratives, starring campaign heroes and goats who occasionally switched from one role to the other in the space of a few weeks.

On Sept. 11, 2012, Romney was in deep trouble. GOP strategists were alarmed at Mitt Romney's failure to mention the troops at the Republican Convention. The omission was "'felony stupid,' raising 'a leadership issue, a spine issue' for Romney." And Romney was to blame, because unnamed advisers had warned him not to concede national security to Obama.

On Sept. 19, in a story that literally said the Sept. 16 story "doesn't matter," Allen and VandeHei revealed that the Romney campaign's rescue plan would actually be "more Mitt," and that more "personal appearances" from Romney would right the ship. On Sept. 28, Allen and VandeHei revealed that the real problem with the Romney campaign was Romney himself, because Romney was a "lousy candidate." (You're off the hook, Stuart Stevens.)

Thankfully, by Oct. 4, Mitt Romney was a good candidate again, because he had "transformed himself" into one during the debate. On Oct. 9, it turned out that the Romney family, led by Tagg, had seized control of the campaign from Stuart Stevens, who was the villain again. Once they "let Mitt be Mitt," things began to turn around.

Finally, on Nov. 4, Allen and VandeHei reported that if Romney were to lose, it would be because there aren't enough white people anymore, and not because of Stuart Stevens' decision to focus on the economy, Romney's personal lack of charisma, or the campaign's failure to allow the uncharismatic lousy candidate to be himself.

No one reading any of these pieces as they ran gained any genuine insight into the state of the presidential race.

Now that the election is done, Allen and VandeHei have decided to write one of their little joint ventures into the minds of unnamed "strategists" weekly, with a new feature called "Behind the Curtain," because Politico's founding myth is that the conventional political journalism it practices is in fact an exclusive and rare glimpse into the halls of power.

"Behind the Curtain," they say, "is a reported column, Web show and online conversation about the behind-the-scenes intrigue that shapes politics and policy. It will unfold every Tuesday (and beyond, when news dictates)." In other words it's a column and a brief Web video. So far, the "behind-the-scenes intrigue" these two have uncovered is that some Republicans plan to run for president in 2016, Marco Rubio and Paul Ryan possibly among them, that the Republican Party has an immigration policy problem, and that the Republican Party is primarily older and white and that is also a problem.

The most notable "Behind the Curtain" column thus far, and the one that does the best job of exposing the actual worldview that informs Allen and VandeHei's work, is the one where they reported that doing what a bunch of CEOs want would "put a rocket booster on the U.S. economy." It turns out, they write, that most politicians agree that doing the things that CEOs want would make the economy better, "but they are too timid to say it in public." And basically the secret economy-boosting plan that everyone is too scared to talk about is tax reform, slashing entitlements, more immigration and more oil and gas drilling, all of which are things that are constantly and loudly supported by CEOs and politicians and newspaper editorial boards every day. Allen and VandeHei are wholly and uncritically endorsing the Beltway and CEO elite consensus while acting as if they are passing on to you secret wisdom.

These two are why every right-thinking person despises Politico and all they stand for.