Where the same few hacks and camera-seeking lawmakers have the same discussions every. single. week 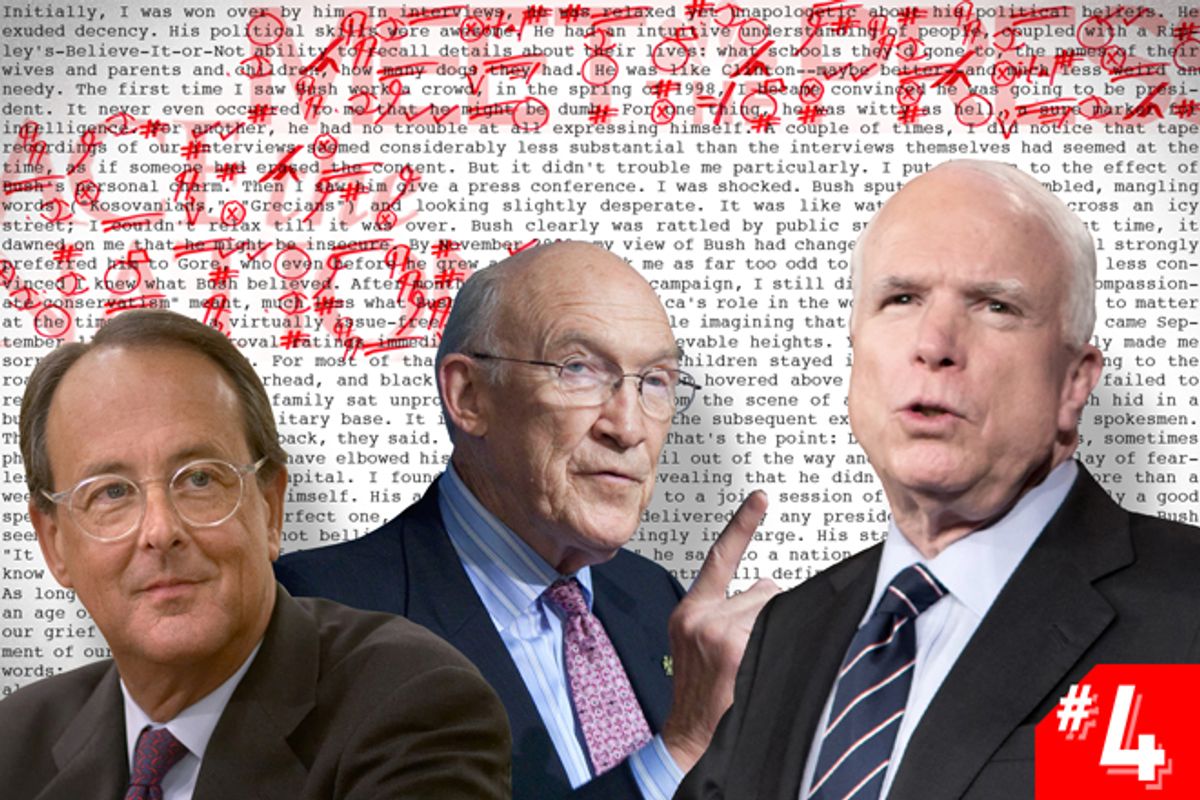 Every Sunday morning, the big four broadcast networks all air their FCC-mandated "public affairs" programming, which consists of a host (a white guy) interviewing the same dozen lawmakers, journalists and pundits in a rotating order. The lawmakers are usually not the most powerful members of Congress -- often they're somewhat marginal figures in terms of influence, in fact -- and the pundits and journalists all generally share the same, or very similar, worldviews. The only people I actually know who watch these things do so out of professional obligation.

But people watch these shows. Millions of people. More people watch "Meet the Press" than "The Daily Show." Most of those people are quite old, but it's still the case that a significant portion of the American people are learning the contours of the great public debates of our time from David Gregory interviewing Lindsey Graham.

FAIR is the organization that has most recently sorted and tallied the Sunday show guests, and yet again, the shows skew white and conservative. FAIR looked at the guest lists for ABC's "This Week," NBC's "Meet the Press," CBS' "Face the Nation, and "Fox News Sunday" from June 2011 through February 2012. They found:

Of one-on-one interviews, 70 percent of partisan-affiliated guests were Republican. Those guests were overwhelmingly male (86 percent) and white (92 percent).

The broader roundtable segments weren't much more diverse: 62 percent of partisan-affiliated guests were Republican. More broadly, guests classified as either Republican or conservative far outnumbered Democrats or progressives, 282 to 164. The roundtables were 71 percent male and 85 percent white.

Media Matters tallied the guest lists in 2005 and 2006 and came up with very similar results. There are never labor leaders, scientists, academics, activists or public policy experts on these shows, ever. There are scarcely any women or people of color. The Sunday shows are broadcast live from the cocoon.

To merely note that they're right-leaning, though, doesn't quite do them justice. They embrace an ideological spectrum that goes from Mary Matalin to James Carville, but the panels are dominated by David Brookses and Tom Friedmans and Bob Woodwards, all spouting the same faux-"moderate" Beltway consensus bullshit. They lean right because the elite Washington consensus is that America leans right. But they worship moderation, baby-splitting, and shallow displays of bipartisanship above all else. Imagine David Gergen and Peggy Noonan agreeing with each other about Simpson-Bowles, forever.

In election years, they fill the panels with partisan hacks. Not just liberals and conservatives, but people who are being paid to go on TV and use prepared talking points to make the case that their candidate will win. It is extremely difficult to see how that serves "the public" in any fashion. Sunday Shows from late in the campaign season reach heights of useless hackdom few other television programs can match. It's nothing but surrogates spinning and pundits making vague or wildly inaccurate predictions based on their "guts" or "intangible" qualities like "momentum." There's a reason ABC's "This Week" was the venue for the legendary Mark Halperin line, "This is excellent news for John McCain."

Post-election, the Sunday Shows have been devoted to discussions of (and panic about) "the fiscal cliff." Anyone who watches these shows likely comes away with a wholly inaccurate impression of what the "cliff" is and does, though they will learn that all of our wonderful elected lawmakers are doing their best to avert the "cliff" and seek bipartisan compromise to lower the deficit, even though "the fiscal cliff" was already a bipartisan compromise to lower the deficit.

If you want to learn precisely how insular and self-satisfied and totally deaf to public opinion and outside expertise and experiences Washington is, the Sunday Shows are enlightening. Just don't expect to learn anything useful about politics or policy, ever.