How feminism caused Sandy Hook, according to the right 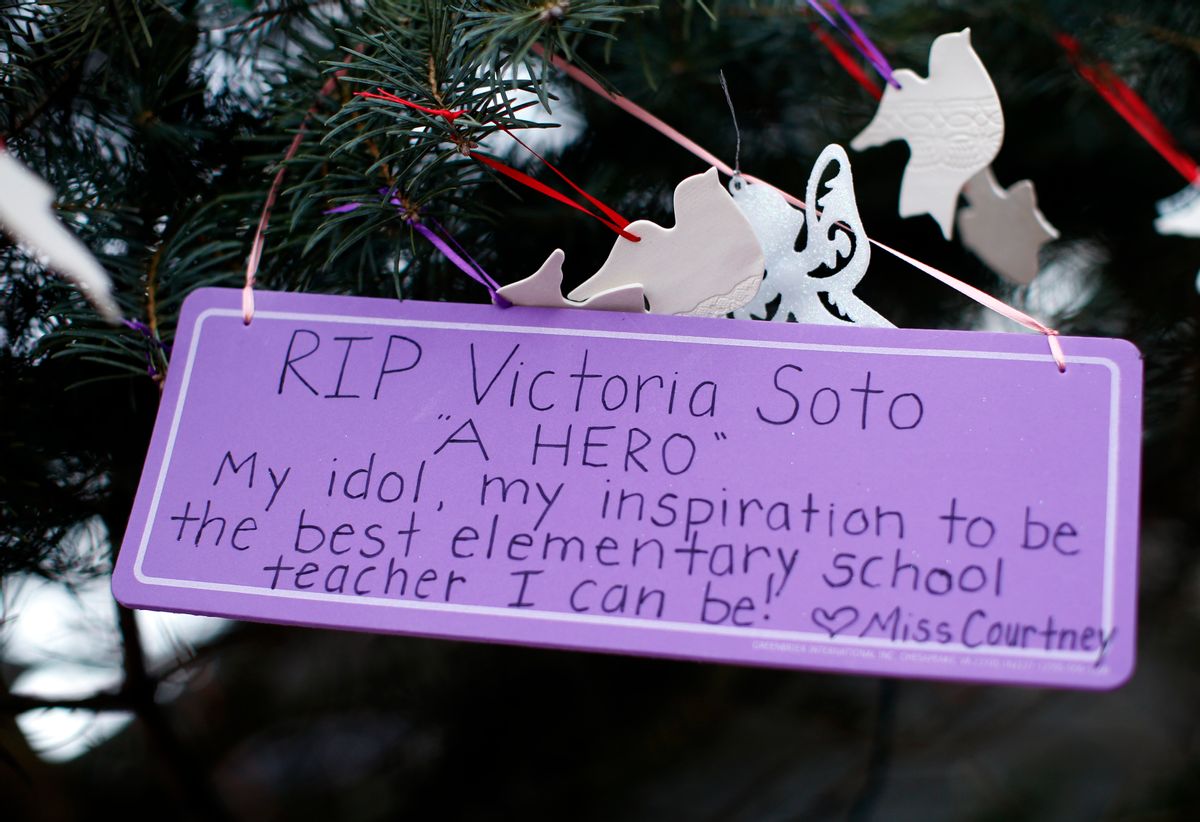 The dogged wish of many on the right to make the tragic Sandy Hook shooting about anything but guns means that it has to be about other things -- ideally, things they already do not like. Things like feminism, abortion or anything else that contributes to the oppression of white men, of which, you’ll note, murderous rampager Adam Lanza was one. And when it came to the last point, solipsism was not limited to the right. Here, a guide to the lowlights.

Blame Obamacare and abortion. We heard, early out of the gate, from Mike Huckabee, who didn’t wait for the funerals to start blaming the liberal banishment of God from schools and government, including “tax-funded abortion pills,” by which the Personhood proponent meant birth control. “We dismiss the notion of natural law and the notion that there are moral absolutes and seemed amazed when some kids make it their own morality to kill innocent children. We diminish and even hold in contempt the natural family of a father and mother creating and then responsibly raising the next generation and then express dismay that kids feel no real connection to their families or even the concept of a family.”

If you missed it, that second sentence is a coded reference to gay marriage and abortion.

Blame our feminized culture. Despite the widely reported heroism of the all female teachers and principals at Sandy Hook elementary, it’s always a good opportunity to call out how women aren’t up to the task, according to professional self-hater Charlotte Allen. “A feminized setting is a setting in which helpless passivity is the norm,” she wrote in the lead article in a National Review package on making sense of the tragedy. “Male aggression can be a good thing, as in protecting the weak — but it has been forced out of the culture of elementary schools and the education schools that train their personnel.”

How do we know the “male aggression” that is purportedly being expunged (those weak females have unseen powers!) will be protective and not destructive, as it was in the one man we know was on the premises that day? How is it that the principal who Allen concedes “lunged at Lanza, before he shot her to death” might have been bulletproof if she’d been lucky enough to be born male? Charlotte Allen will leave that to a strong man to answer. On the other hand, her piece is followed by a much less fire-breathing take from the president of Focus on the Family. Feminization abounds! Luckily, other contributors blamed abortion (several times).

Blame sexual frustration and/or bring up made-up black rapists. A piece posted and distributed by the head of Tea Party Nation earlier this week and spotted by ThinkProgress has lots of non-firearm blame to go around, but there are two bizarrely sexually charged gems:

Restrict the sex in movies, television, on the internet. There is a reason why young people commit these sorts of crimes, and sex plays no small part. Their passions are eternally inflamed, and they wander the Earth with no outlet for their overstimulated glands.

He also calls for us to “engage in more frank discussion of race and culture." OK, sounds interesting, how do you mean? "For far too long we have tiptoed around these issues, fearful of being branded a racist. If black thugs kidnap and rape a woman, ask if there is something in the black culture that fostered that. If an evil white kid murders a bunch of children at the school, ask the same question of the white community ... We have to stop hiding from our respective national sins.”

Raise your hand if you have no idea what a mass murder by a “white kid” (who is somehow not branded a thug) has to do with a hypothetical group of “black thugs” (who are), except that clearly Birdnow is excited to not have to “tiptoe” around his desire to talk about one of them.

Blame women and people of color for not being nice enough to white men as they’re robbed of privilege. I do not know the politics of Princeton French professor Christy Wampole, but she is of a different stratum than the professional culture warriors above. Still, she sings their song in her own key in a piece on the New York Times website, saying in response to the mass murder, “This is merely anecdotal evidence, not social science, but I believe that it is indicative of a sort of infection spreading in our collective brain, one that whispers to the American subconscious: ‘The young men are in decline.’” The appropriate thing to whisper back, apparently, is “Poor baby."

Walpole writes of young men, "They were once our heroes, our young and shining fathers, our sweet brothers, our tireless athletes, our fearless warriors, the brains of our institutions, the makers of our wares, the movers of our world." (They were, perhaps, in literature. In this reading of history, they conveniently were never, in real life, "our" enslavers or oppressors.) "But more young men these days are avatars of soldiers rather than soldiers themselves." (I think that's a reference to video games.)

As a result, she writes, “the angry white man has usurped the angry black man." As Jamie Peck put it in her takedown at the Gloss, "While the angry black man was angry about things like, I don’t know, the way white people kidnapped a million of his ancestors from Africa and enslaved them, then freed them but made them live in an environment of widespread racism, poverty and oppression, the angry white man is angry about whatever marginal gains people who are not him have made in the past 50 years or so." Those gains, I might add, include belated recognition of the right to vote and participate in politics, which it is so unfair that white men had to share.

But here's Wampole's key insight: "Those of us who are not male or white have enjoyed some benefits from their decline, the sort of violence and murder that took place at Sandy Hook Elementary will continue to occur if we do not find a way to carry them along with us in our successes rather than leaving them behind."

In other words, ladies and marginalized people: Can't you be a little nicer in this apparently zero-sum game of rights grabbing? Or else this otherwise shining young man will shoot a bunch of children.