Senators are up in arms over "Zero Dark Thirty." The real outrage is how the government helped make the film 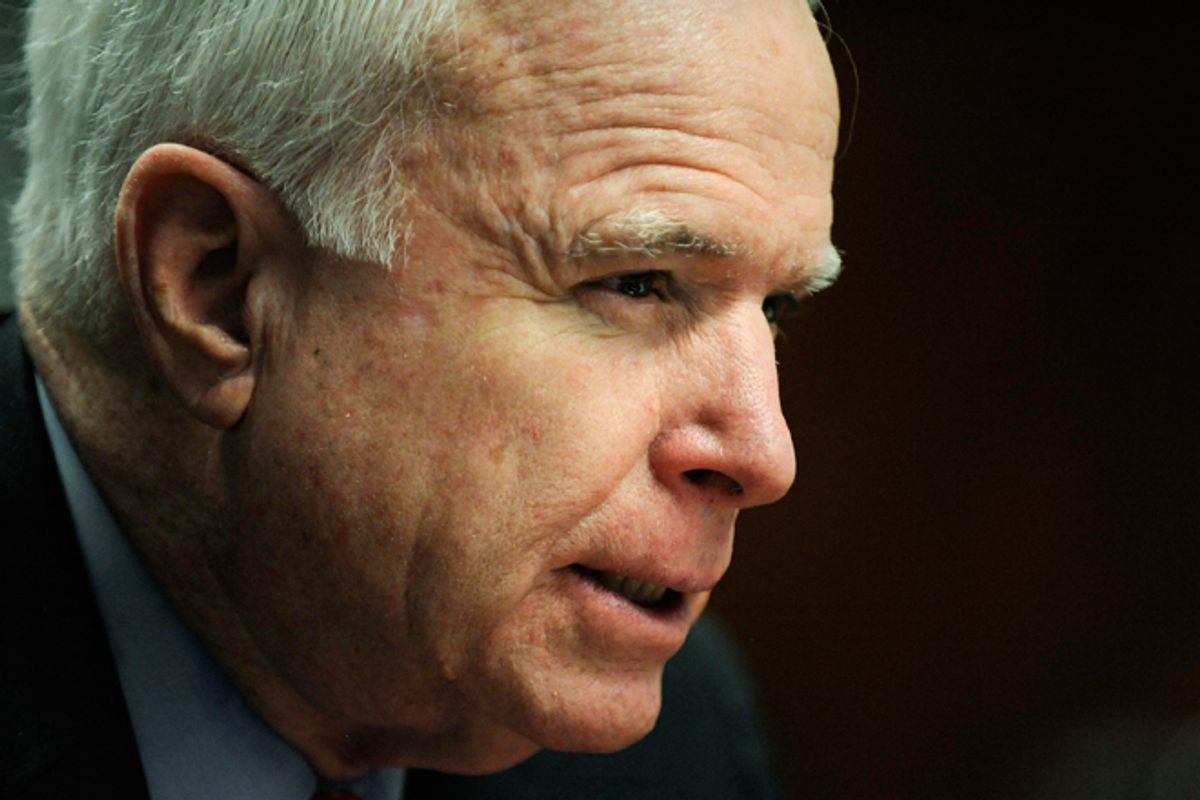 Through a scathing letter to Sony Pictures about its new film "Zero Dark Thirty," Sens. Dianne Feinstein (D), Carl Levin (D) and John McCain (R) have made national headlines by publicly chastising the studio for turning its film into a piece of revisionist history. The lawmakers note that while the film bills itself as "based on first-hand accounts of actual events" and as an act of "journalism," the truth is that it substantially deviates from the facts. Specifically, its narrative portrays torture as "effective in eliciting important information" related to the killing of Osama Bin Laden, even though CIA records prove this is not true.

The letter, which you can read here, is an exemplary act of public service in that it seeks to prevent millions of moviegoers from being indoctrinated by "Zero Dark Thirty's" dishonest political message about torture. There's just one thing wrong with it: a similar letter should be sent to the Pentagon and the CIA, which cooperated with the production of the movie -- ostensibly with full knowledge that the story was wrong.

This is the real controversy at hand with Kathryn Bigelow's new blockbuster: it's not simply that her film misleads viewers about torture nor that it does so while pretending to be a dispassionate, documentary-esque look at the hunt for bin Laden. It is that such politically charged pro-torture mythology may not have been manufactured merely by an ambitious Hollywood director in order to create edge-of-the-seat dram and ticket sales. Instead, its revisionism may have been deliberately aided by the very governmental agencies which have a vested interest in suppressing critical questions about its own torture policies.

To understand this subterfuge -- and all its major political implications -- is to appreciate the mechanics of what's been called the Military-Entertainment Complex.

As I documented in my book, "Back to Our Future," the U.S. government's national security apparatus has since the 1980s worked closely with the entertainment industry to suffuse movies, television shows and video games with political messages.

When it comes to movies, the collaborative process is a straightforward bargain. Directors want access to Pentagon and CIA hardware and logistical assistance at cut-rate, taxpayer-subsidized prices. Those agencies, through the military and CIA film liaison offices, are typically happy to oblige, as long as directors submit their screenplays for thematic editing of a prospective film's overall storyline and granular line-editing of the script's dialogue. That editing, which is only vaguely disclosed in the fine print credits of films, often ends up making films more ideologically pro-military and pro-war. But according to film liaison officials, the objective of the whole review process is simply to make sure a film accurately represents military history and operation.

If a filmmaker refuses to make the script changes demanded by the Pentagon or CIA, those agencies typically bar access to government hardware and property and do not cooperate in information requests. This often makes a film physically impossible -- or prohibitively expensive -- to produce. On the other hand, if the Pentagon and CIA are actively cooperating on a movie, it ostensibly means the national security apparatus has reviewed the film's screenplay and affirmatively approved its substance.

This, of course, is the potential smoking gun in the controversy surrounding "Zero Dark Thirty."

Freedom of Information Act requests prove that the Pentagon, CIA and Obama White House actively helped director Kathyrn Bigelow and screenwriter Mark Boal from the very beginning of their production of "Zero Dark Thirty." Based on the history of how the Military-Entertainment Complex operates, it is fair to assume those government institutions at least reviewed -- and, perhaps sculpted -- the storyline and screenplay of Bigelow's film. We can presume this not just because that's the general way those agencies interface with Hollywood, but also because the Pentagon specifically withdrew its assistance of Bigelow's last film, "The Hurt Locker," precisely because Bigelow changed that film's script without military approval.

This time, though, they didn't withdraw their assistance -- they enthusiastically helped. That suggests the Pentagon and CIA -- at the very least -- reviewed the final script and approved it knowing full well it included fabrications about torture.

Did the Pentagon and CIA reviewers explicitly approve Bigelow's film? If they did, why would the Pentagon and CIA reviewers, whose whole job is supposedly to make sure scripts are accurate, nonetheless approve a script that is factually inaccurate? In the review process, did those agencies raise objections to the torture-glorifying revisionism? Or, in more sinister fashion, did those agencies actually encourage Bigelow to add in scenes about torture, so as to glorify the controversial interrogation methods and suppress political questions about them?

These are the most crucial questions lawmakers should be asking in their government oversight roles, because while it's one thing for a profit-seeking studio to sensationalize a story to generate ticket sales, it's an outright abuse of governmental power and taxpayer resources for the Pentagon and CIA to tacitly help propagate falsehoods about its own operations.

Of course, none of this is to argue in support of the current mission of the Pentagon and CIA film offices in general. The whole way they make access to public property (military hardware, documents, bases, etc.) contingent on directors' willingness to submit to editing is a devious form of compelled propaganda, if not outright illegal censorship. Indeed, entertainment reporter David Robb, who authored the book "Operation Hollywood," makes a strong case that such behavior is blatantly unconstitutional "because the Supreme Court has held in numerous rulings that the government cannot favor one form of speech that it likes and not give the same benefit and favors to speech that it does not like." It would be a good thing if, at some point in the future, the court terminates such a practice, and declares that filmmakers can have access to public property regardless of the political angle of their films.

However, this is to argue that with the Pentagon and CIA currently in the business of trading cooperation for script approval power, and with those trades happening officially in the name of accuracy, such approval is logically akin to a governmental affirmation of a film's substance.

In the case of "Zero Dark Thirty," that means the Pentagon and CIA may not have been innocent victims of a Hollywood lie, but potentially co-conspirators in creating a lie - one that just so happens to justify the illicit torture practices of the co-conspirators themselves.