NRA: "Put armed police officers in every single school in this nation." 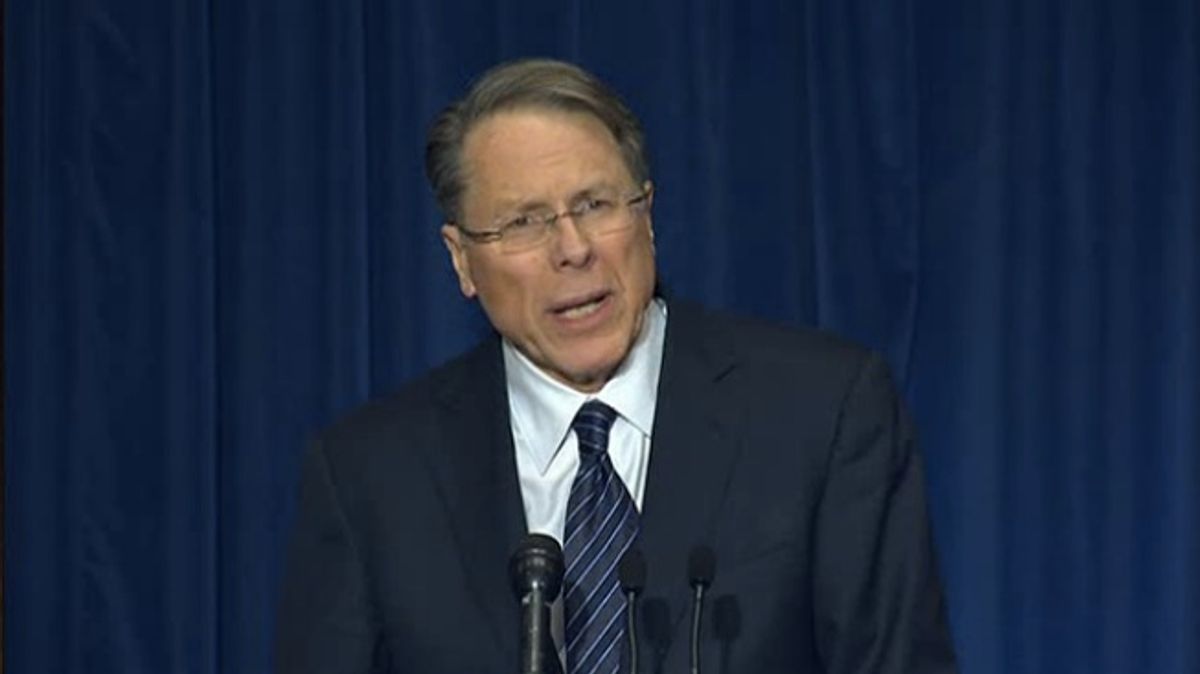 In a stunning press conference this morning, Wayne LaPierre, the National Rifle Association CEO, called for Congress to "appropriate everything that is necessary to put armed police officers in every single school in this nation."

Blaming everyone from the media ("co-conspirators") to video games ("Grand Theft Auto"), music videos (they "portray life as a joke, and portray murder as a way of life"), and movies ("American Psycho"), LaPierre said that in the wake of the Sandy Hook shootings, the NRA "must speak for the safety of our nation's children."
He continued:

"Nobody has addressed the most important pressing and immediate question we face: How do we protect our children right now, starting today, in a way that we know works? The only way to answer that question is to face the truth: Politicians passed laws for gun free school zones, they issued press releases bragging about them, they posted signs advertising them. And in doing so they tell every insane killer in America that schools are the safest place to inflict maximum mayhem with minimum risk. How have our nation's priorities gotten so out of order?"

LaPierre added that there's "another dirty little truth that the media try their best to conceal: There exists in this country, sadly, a callous and corrupting shadow industry that sells violence against its people," including video games, movies and music videos. "Isn't fantasizing about killing people as a way to get your kicks really the filthiest form of pornography?"
"Rather than face their own moral failings, the media demonizes gun owners," LaPierre continued, calling for Congress to fund armed police officers in every school in the nation. "The only way to stop a monster from killing our kids is to be personally involved and invested in a plan for absolute protection. The only thing that stops a bad guy with a gun is a good guy with a gun."
During the press conference, protesters from Code Pink interrupted LaPierre's remarks with shouts of "it's the NRA and assault weapons that are killing our children."
LaPierre did not take questions, but will appear on Meet The Press this Sunday. And the NRA's Twitter feed finally broke its social media silence: