Pick of the week: A wrenching tale of love and death 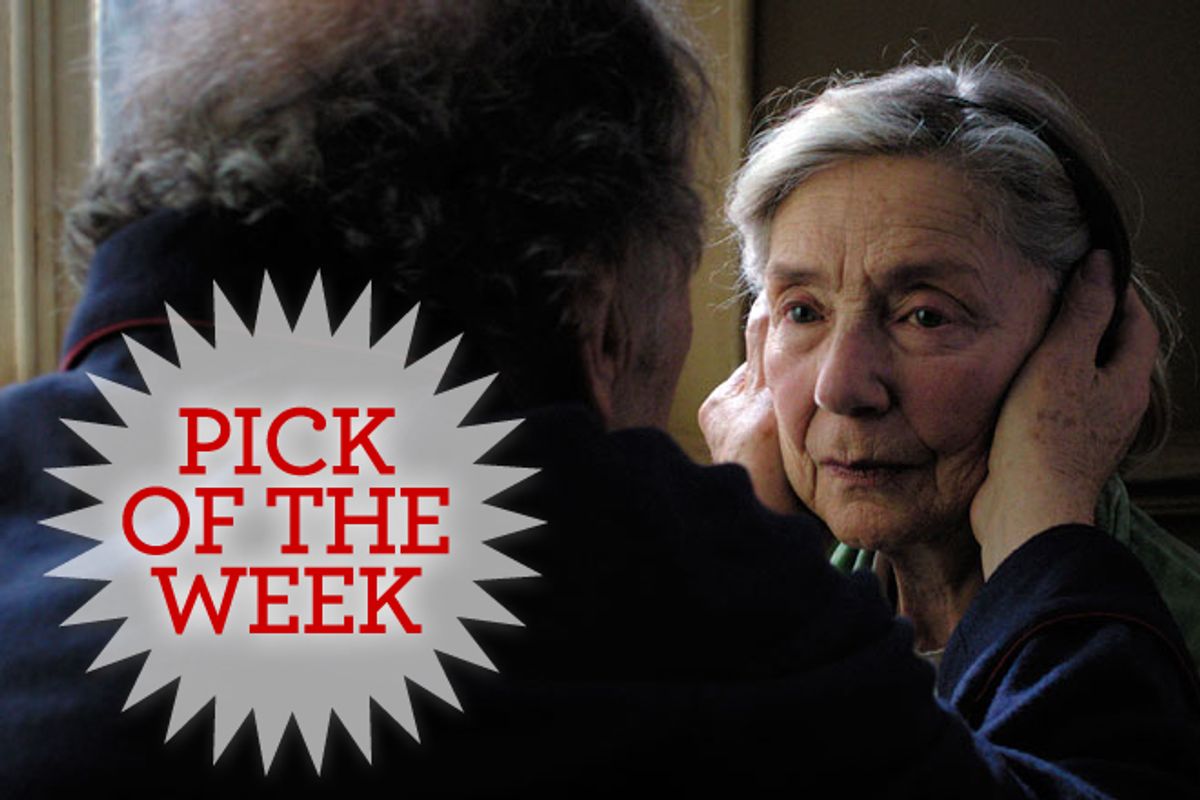 We all know the end of the human story, at least on an individual level, and so it is in Michael Haneke’s extraordinary “Amour.” At the beginning of the film, firefighters break into a large and luxurious Parisian apartment, which appears abandoned, to discover that one of the interior rooms has been locked and sealed with tape. Once they gain entry to that room, they find the body of an elderly woman, wearing an elegant black dress and posed serenely on a bed that has been scattered with flowers. Then we go to blackout, and then come the opening credits, in total silence.

One way of describing “Amour” is to say that the rest of the film is an explanation of this macabre tableau and how it came to be, but one might equally say – especially since we’re in the universe of Michael Haneke – that it resists explanation, or does not require one. On its surface, “Amour” is the most straightforward and gentlest of all Haneke’s films, a delicate and wrenching tale of an older couple facing what awaits us all. In a recent conversation, Haneke told me that he intends no irony with the title, and indeed I see “Amour” less as a tale of suffering and death – although some of it is admittedly difficult to watch -- than as one about the dignity and nobility of human life even in the face of those things. (I’ll publish my interview with Haneke sometime in the weeks ahead, as the film is released more widely.)

Moving backward in time a few weeks from the startling opening scene, we meet the dead woman in life as Anne, a retired piano teacher played by 85-year-old Emmanuelle Riva, a French star of the ‘60s who appeared in Alain Resnais’ “Hiroshima, Mon Amour,” among other notable films. Her cantankerous but affectionate husband, Georges, is played by Jean-Louis Trintignant, best known as the star of Claude Lelouch’s 1966 “A Man and a Woman” and Eric Rohmer’s 1969 “My Night at Maud’s.” So on one obvious level, “Amour” is a tribute to two aging legends of the French screen and the cinematic tradition they represent. Both actors give complicated and heartbreaking performances, but Riva’s unstinting portrayal of a composed and generous woman who knows that everything – her mental clarity, her physical control and life itself – will soon be stripped from her is absolutely unforgettable. If Riva receives a best-actress nomination from the Academy, as she certainly should, she will be the oldest person so honored.

“Amour” also bids a tender if ambiguously charged farewell to a certain class and generation of Europeans – the cultured, patrician haute bourgeoisie so perfectly captured in Georges and Anne – which is now passing away into memory and history. You can argue all you want to about the cultural and political legacy left behind by this caste of people, and I think Haneke’s career as a filmmaker speaks to his clear vision of the illusions and delusions held by the privileged classes. But I’ve read some reviews of “Amour” that make it sound as if the decorous setting, the glorious 19th-century ceilings and books and paintings and piano music, were a form of strategic window-dressing or Oscar bait, which I think is a crucial misreading. (Then again, I should add that my own mother is 90 years old and a member of the American version of this class. As always, what you bring to the movie determines how you will receive it.)

After the opening credits, we see Georges and Anne outside their apartment for the first and only time, attending a piano recital by Alexandre Tharaud, a real-life star in the classical realm who plays himself (as a former student of Anne’s) in the film. When they return home they discover that someone has tried to jimmy open the lock on their front door and break in. It’s an apparently inconsequential detail that is soon dropped, but if I know one thing about the director of “Caché,” “The White Ribbon” and “Funny Games,” it’s that there is no such thing as an inconsequential detail, or a crime without repercussions. Georges is mostly irritated by this event – he’ll have to pay the concierge to repair the lock – but Anne is a little frightened: “Imagine if someone came in while we were in bed!” she exclaims. “I would probably die of fright.”

Indeed, one could metaphorically say that someone or something has indeed entered Georges and Anne’s apartment, and that fear and death have come with it. (Of course, the scene also echoes the break-in we’ve already seen, the one we know will be necessary at the end of the story.) “Amour” is certainly different in many ways from Haneke’s existential horror movies, in which unexplained and perhaps inexplicable acts of violence disrupt both the surface of ordinary life and the agreed-upon conventions that govern the relationship between the narrative, its creator and the audience. But it may not be quite as different as it looks: Within the evident simplicity and naturalism of “Amour,” and its intimate focus on the human relationship at its center, exactly the same kinds of disruptions occur, albeit at a subtler level.

No one within the film stops the action and rewinds it at a crucial plot juncture, as infamously occurs in “Funny Games,” nor is there a foregrounded narrative puzzle with no plausible real-world solution, as in “Caché.” But from the morning after the attempted break-in, when Anne suffers an attack (likely a stroke) that leaves her staring blankly into space for several minutes, “Amour” begins to creep gradually away from a strictly literal recording of events. What “actually” happens as Anne grows weaker and sicker, and as she and Georges try to maintain their daily routine as best they can, is more than powerful enough to engage your attention. Indeed, the intense and leisurely attention paid to the rhythms of the couple’s days made me reconsider the role of ordinary life in Haneke’s world. It’s too easy to say that he views bourgeois family existence from a sardonic distance, and I now suspect it’s not true. Maybe it’s more accurate to suggest that he sees it as our only bulwark against the chaos and violence of existence.

Haneke’s script is pinned to Georges’ subjective awareness, and an elderly man with a dying wife is not necessarily the most reliable narrator. He copes with daily life admirably and even heroically: He pays the concierge to keep them stocked with groceries, curtly dismisses a nurse who treats Anne like a recalcitrant child and fends off the good intentions of his meddlesome daughter (Isabelle Huppert, in a modest but deeply felt supporting role). But Georges also has troubling dreams about structural collapse, flooding and spectral assault, and enigmatic encounters with a pigeon who twice comes in the apartment’s open window. A pigeon is of course a species of dove, a symbol used in Christianity to denote the Holy Spirit – and then, this particular pigeon may also be the one seen in a prominent painting or drawing in Georges and Anne’s sitting room.

After a failed operation early in her illness, Anne has made Georges promise never to send her back to the hospital. You may have guessed from the evidence, or read elsewhere, what happens at the end of Georges and Anne’s story, and you will more or less be prepared for it when it comes. But just as I cannot tell you how to interpret that pigeon – as a theological visitation, as creeping dementia, or as a random Parisian wildlife encounter – I am here to say that I have seen “Amour” twice and am not entirely sure how to interpret the end of the film. Or the beginning, or most of what comes in between. As ever, Haneke leaves us with more questions than answers, but I will agree with him that there is no note of irony in his title. This is an unforgettable love story set at the close of day, as tragic and beautiful in its way as “Tristan und Isolde,” and a portrait of the impossible beauty and fragility of life that will yield new experiences to every viewer and every viewing.

“Amour” is now playing in New York and Los Angeles, with wider release to follow.