Why the NRA's plan won't work 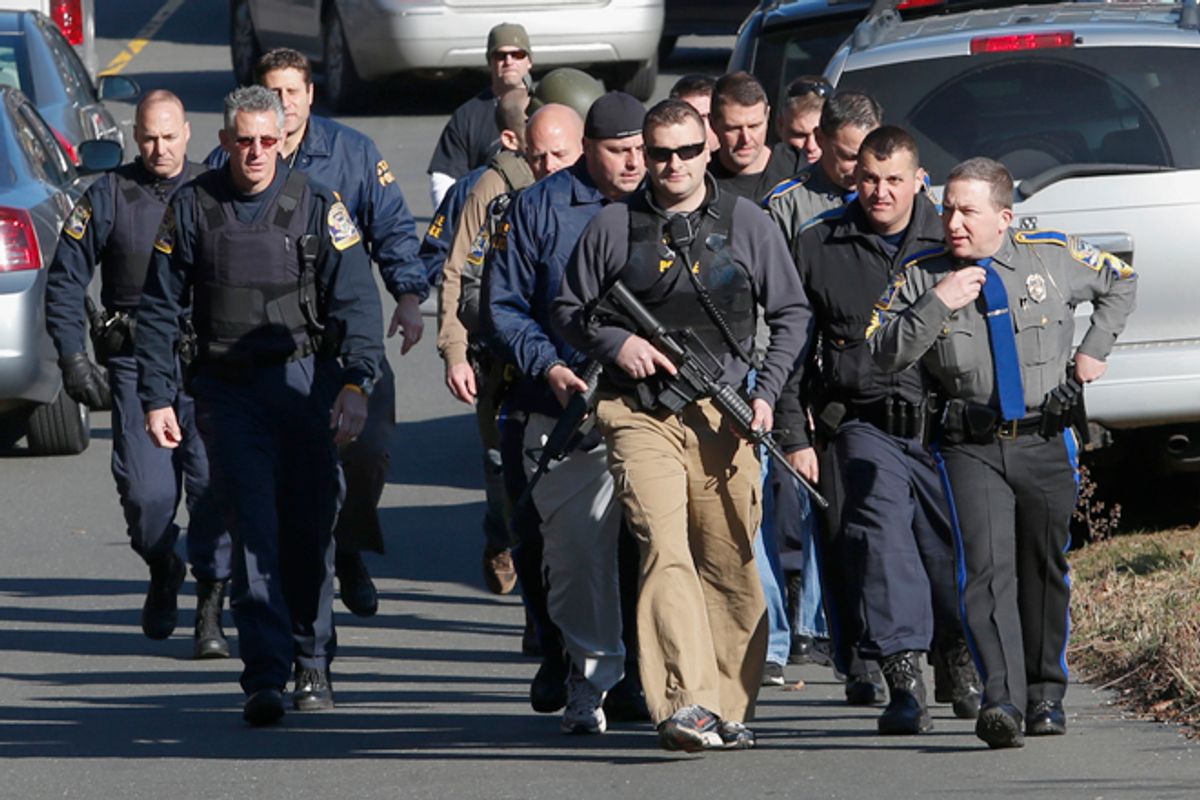 Before we just laugh away the NRA's plan to put armed guards (either police or volunteers) in every school in America, it's worth at least asking: Would it even work? People who actually study gun violence were not impressed.

“The statement by the NRA is without any evidence that it would be effective,” said Dr. Fred Rivara, an epidemiologist at the University of Washington and the editor-in-chief of the pediatrics division of the Journal of the American Medical Association, in an email to Salon.

In fact, there was an armed sheriff’s deputy at Columbine High School the day of the shooting. There was an armed citizen in the Clackamas Mall in Oregon during a shooting earlier this month. There was an armed citizen at the Gabby Giffords shooting -- and he almost shot the unarmed hero who tackled shooter Jared Loughner. Virtually every university in the county already has its own police force. Virginia Tech had its own SWAT-like team. As James Brady, Ronald Reagan’s former press secretary cum gun control advocate, often notes, he was shot along with the president, despite the fact that they were surrounded by dozens of heavily armed and well-trained Secret Service agents and police.

“It’s kind of fantasy thinking to assume that armed citizens are going to take out the bad guy and that nothing will go wrong,” Daniel Webster, the director of the Johns Hopkins Center for Gun Policy and Research, told me last week for a separate article on why the answer to gun violence is not more guns.

And what happens to the guns while they're sitting around waiting for a mass killing to occur? They could be discovered by a suicidal student, unintentionally fired by a child or even inadvertently set off by a police officer, like this Oakland, California, cop who shot himself in front of a classroom full of students three years ago.

Today, Dr. Jerome Kassirer of Tufts University’s School of Medicine wrote that arming school teachers and nurses is a bad idea. “If we judge by recent experiences, this strategy is wanting. In Florida, a ‘neighborhood watch coordinator’ killed an unarmed boy who was acting suspiciously; and near the Empire State Building, police fire injured 9 pedestrians while they were subduing 1 shooter. Would ‘more guns’ lead to fewer gun deaths? Unlikely.”

Instead, the experts call for expanding federal support for gun violence research (Congress has statutorily limited gun violence research for political reasons since the 1990s), protecting doctors' rights to ask patients about guns, and the passage of common-sense gun regulations like a ban on high-capacity magazines.

Arthur Kellerman, a prominent gun violence researcher now at the RAND Corporation, worried the NRA's plan would only increase the number of guns that could cause harm. “Armed guards?  Do they have any idea how many schools, kindergartens, day cares, ball fields, and playgrounds there are?  Where would this stop?” he asked in an email.

Meanwhile, as Josh Barro points out, schools are already relatively very safe. There were just 15 homicides out of a population of 55.6 million K–12 students in the 2008–09 school year (giving you a 1 in 3 million chance of being killed at school), and students outside of school are twice as likely to be victims of serious crimes as those inside schools. Matt Yglesias adds that the NRA’s plan is a horribly inefficient use of resources, as you're better off using those extra police officers elsewhere.

"Rather than seize this opportunity to show the American public the NRA can be a rational partner committed to preventing more innocent children from being murdered, we saw an NRA leadership today that was reactionary, tone deaf and out-of-sync with the majority of gun owners in this country," Alicia Samuels, the communications director for the Johns Hopkins's gun research center told Salon. "Wayne LaPierre is not in a position to speak on behalf of every parent, child, teacher and school administrator in this country whose lives would be most impacted by this fanatic, dangerous idea. The only people who benefit from this extremist more-guns mentality are gun manufacturers."

Watch this 20/20 special from 2009 where they set up a realistic experiment to see if people are even capable of responding school shootings effectively. The answer? Almost certainly not.