Is it a sign of bad parenting that my kids have no clue who the Three Wise Men are? 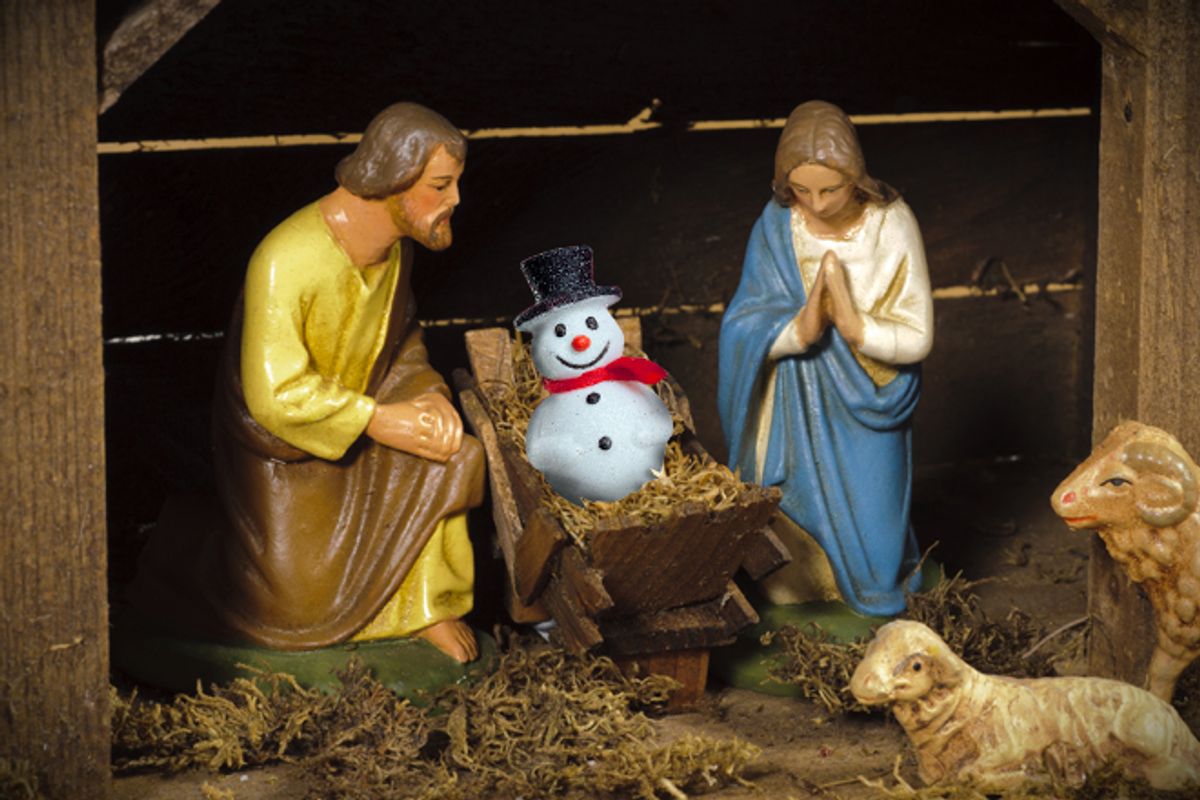 A few years ago, we were setting out Christmas decorations in our house as our 5-year-old daughter looked on. We are not a religious family, but my wife was raised Catholic, and she has retained a fondness for Nativity scenes. Our two children know enough about the Christmas story to recognize Jesus, Mary and Joseph even when rendered in rustic terra cotta. They’re fuzzier, however, when it comes to the supporting cast. As she watched her mother remove the figures one by one from their shrouds of crumpled newspaper, she couldn’t quite place the Three Wise Men.

“Are those cowboys?” she guessed. “Security guards?”

As another holiday season is upon us, I caution you not to take such questions lightly. Holidays are the playoffs of the parenting game. Our ability to feed, clothe and educate our children is never more on display. We are expected to have them dressed properly for ritual events. They must be able to execute a thank-you note in a timely fashion. They should know the words to festive songs – and never, ever utter in public the lines “Batman smells/Robin laid an egg.”

Long before the first child came out of the womb, many of us had envisioned how perfect these moments of holiday family togetherness would be. Even the most innocent screw-ups – the overcooked meal, the tree that fell down, the meltdown during “The Nutcracker” – threaten to live long in everyone’s memory. Eventually, children are old enough to take the blame for these transgressions, but until then, while they are young, this is our annual opportunity to feel inadequate.

Since becoming parents 10 years ago, my wife and I have not scrimped in our celebrations either. We take our responsibility as executive producers of these festivities very seriously, and at least one of us routinely finds herself baking, buying and decorating to the point of near-exhaustion. It’s all there: the garland on the front porch, the advent calendar in the living room, the carols on the radio. The result is we now have two children who live holiday-to-holiday, the way you would if you were the manager of a HoneyBaked Ham store. The first time our son saw our discarded Christmas tree pulled from the curb, he bawled. When he had calmed down, he asked if it was now time to bring out the Valentine’s Day ornaments.

It’s hard not to feel conflicted about marking these days in an almost entirely secular manner. One glance at the way more pious families fill their seasons with rituals and stories and opportunities for reflection and good works, all of it reinforced by inclusion in a supportive community, and our faith-free celebrations start to look like mighty weak tea. Once, my son remarked that none of the songs we sing at Christmas has anything to do with the reason for celebrating the holiday. He was surely just mimicking one of his churchgoing friends. Yet it disturbed me to think of a 7-year-old feeling conflicted about “Rudolph” or “Frosty” or “Jingle Bells.”

For the past several years, as a way to expose our kids to different belief systems and because we value tradition, we’ve attended Christmas Eve services at local churches. One year, having resolved that I wouldn’t shy away from talking about religion with my children lest they think it a taboo subject, I decided to follow it up with a bit of context. I called them to join me on the couch; open on my lap was a large illustrated Bible identical to one my grandmother had given my brother and me in vain 30 years ago. As I flipped to the chapter in Luke titled “The Birth of Jesus,” my kids gawked at the garish pictures of hirsute men and demure women.

A few sentences in, they began interrupting me with questions. “Where’s Galilee? Who’s Herod? What’s Myrrh?” I deferred the questions to my wife. She made a beeline for Wikipedia. When my children asked why Jesus appeared to have two fathers – God and Joseph – I couldn’t help thinking of the old controversy over school libraries carrying books about kids with gay parents. By the time I had finished trying to explain the visit from the Magi, I was seriously regretting this. Far from providing context, I had confused them.

But here’s the thing: Holidays are the playoffs for religions, too. It’s the time at which they tell their most outlandish stories (I’m looking at you, Virgin Birth). Whether or not you’re engaged in daily discussions of those stories and their meanings with your children, you’re bound to have some tough questions to answer. And that’s great: Questions are a sign that the kiddos aren’t just blindly accepting what they’re told, that they’re thinking for themselves.

Besides, the main byproduct of these holidays’ religious roots – an emphasis on expressing our love and caring for others once a year – is a good thing. In the current state of our world, we should take it where we can get it, and make sure our kids do, too. If you’re a secular parent and you’re worried about being hypocritical, think of Richard Dawkins, the evolutionary biologist and uber-atheist, who admitted a few years ago that he still likes to sing carols at Christmastime.

My aborted attempt at teaching my children more about Christmas didn’t dampen their enthusiasm. That year, after I had dragged the tree to the curb, they collected the leftover needles from the floor and put them in a special box. What can I say? My children love holidays. They’ve imbibed the magic of the season despite understanding little of the reason. Here’s hoping they never forget the story of Jesus, his two dads and the three security guards.

Andrew Park is the author of Between a Church and a Hard Place: One Faith-Free Dad's Struggle to Understand What it Means to Be Religious (Or Not). He lives in Chapel Hill, North Carolina.