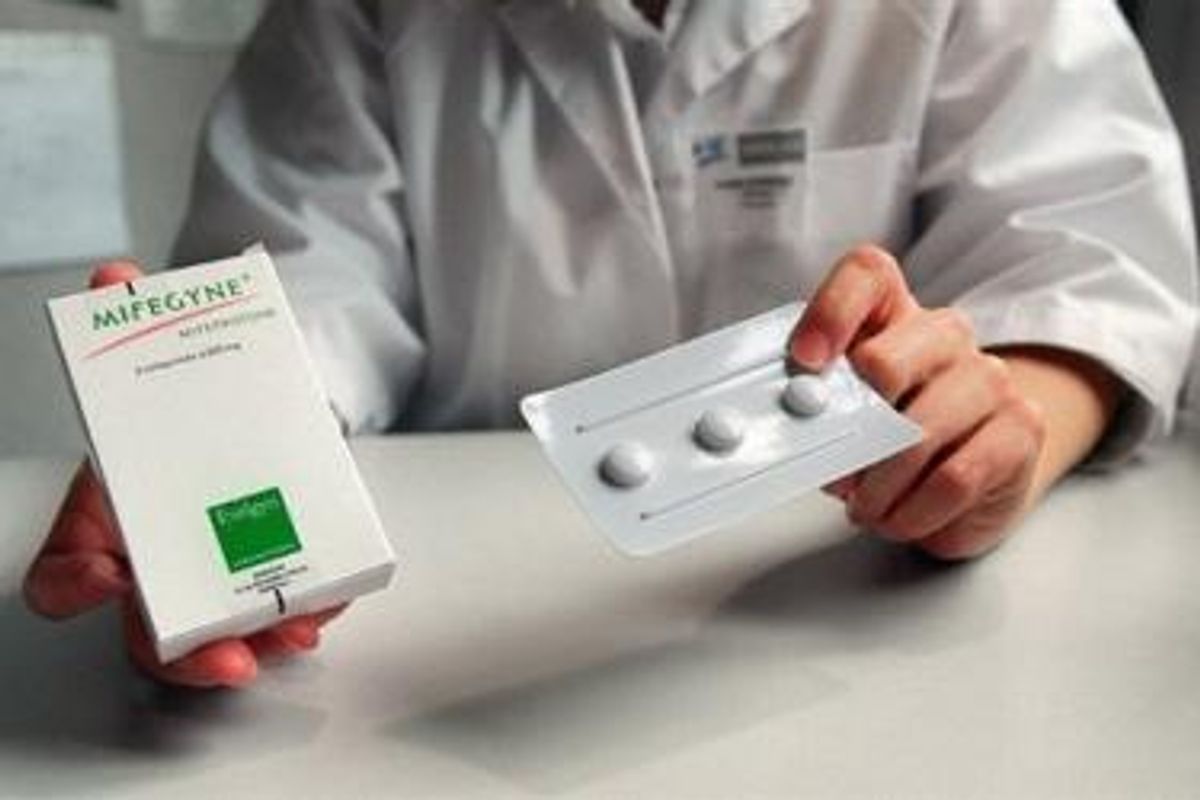 A GOP lawmaker is looking to make Texas the latest state to restrict the use of abortion medications in a way that some experts warn could increase the drugs’ side effects while making them more expensive.

Anti-abortion activists and legislators can’t enact an outright ban on abortion-inducing drugs like mifepristone (formerly known as RU-486). Instead, they have sought to force doctors to strictly adhere to U.S. Food and Drug Administration guidelines that appear to be significantly out of step with the current scientific understanding of how the medications should be used.

Lawmakers have passed abortion drug restrictions in Arizona and Ohio, overcoming legal challenges. The Oklahoma Supreme Court recently ruled that similar legislation in that state was unconstitutional. A North Dakota bill is currently tied up in litigation.

In Texas, state Sen. Dan Patrick’s bill, which mirrors model legislation drafted by anti-abortion group Americans United for Life, would require doctors who prescribe an abortion drug to follow the protocol outlined in the official drug label approved by the FDA. He introduced similar legislation in 2011 -- with the AUL’s support -- but it didn’t pass. Patrick also authored the state’s controversial pre-abortion sonogram law.

In most state’s, doctors aren’t required to abide by the FDA guidelines. And since the FDA only regulates the drug market and not the practice of medicine, “off-label” treatment isn’t against federal law either. In fact, the FDA itself notes that physicians may prescribe a medication off-label as long as they are well informed about the product and “base its use on firm scientific rationale and on sound medical evidence.”

AUL insists that off-label use of mifepristone “can be deadly.” While Patrick did not respond to interview requests from The American Independent, he “said the intent of [the bill] is to improve the doctor-patient relationship” in an email to the Texas Tribune. But the legislation’s strict adherence to the FDA guidelines worries reproductive health care advocates and medical experts. They say a substantial body of recent research shows that the mifepristone drug label is outdated, potentially creating unnecessary burdens, financial costs, and health risks for women.

During a medical abortion, mifepristone is given to the woman at the clinic. The second round of medicine, misoprostol, is taken a day or two later to help end the pregnancy.

The FDA guidelines say that women should take 600 milligrams of mifepristone. But 2012 World Health Organization guidelines recommend a lower dose of mifepristone. Citing several studies, the report states that “200 mg of mifepristone is the dosage of choice, since it is as effective as 600 mg, and reduces costs” when it is followed by a dose of misoprostol.

Some of the language in Patrick’s bill is ambiguous, but it appears that it would also require women to receive their second dose of abortion pills – the misoprostol – in the presence of her doctor rather than at home, where it is typically taken. A number of reproductive health advocates find that rule troubling.

According to the National Abortion Federation, the majority of women who take mifepristone will abort within four hours of using misoprostol. Because of this, most women choose to take the misoprostol dose in the comfort of their own home due to painful side effects such as cramping and excessive bleeding that can also occur within the first few hours. Nausea, vomiting and fever are among the other side effects women may experience, according to NAF.

“Women want to plan for the expelling of this fluid and blood tissue at their own time and they want to be in a comfortable place,” said Elizabeth Nash, state issues manager with the reproductive health and policy-based Guttmacher Institute. “So you can understand why a woman would want to take the medicine at home, especially if she has a fair distance to travel, which could happen in a place like Texas.”

The FDA guidelines and, apparently, Patrick’s bill do not give women the option of taking the second drug at home.

But the medical consensus has evolved in recent years. Unlike the old FDA guidelines, the 2012 WHO guidelines say that “[h]ome use of misoprostol is a safe option for women.”

Similarly, abortion drug guidelines set forth in 2005 by the American Congress of Obstetricians and Gynecologists say that the lower 200-milligram dose of mifepristone is as effective as the higher, FDA-approved dosage and that “multiple large studies in the United States have demonstrated that a patient can safely and effectively self-administer the misoprostol … in her home.” The ACOG guidelines note that the alternate drug regimens were developed in an effort to “reduce side effects” and “make medical abortion less expensive, safer, and more rapid.”

Dr. Mitchell Creinin, who worked on the ACOG guidelines and currently chairs the Department of Obstetrics and Gynecology at the UC-Davis, says the FDA-approved regimen is “outdated” and that the “vast majority” of providers follow the updated protocol.

The FDA guidelines don’t just stipulate when and where the woman can take the abortion drugs, but how. Misoprostol is only approved by the FDA for oral use, says Creinin, whereas research has shown that ingesting a higher dose of the medicine buccally (placing the pill in between your teeth and cheek) or vaginally can, in some instances, decrease side effects and work faster and more effectively — especially as the pregnancy advances.

According to ACOG, the new protocol is effective for women who have been pregnant for up to 63 days; by contrast, the FDA guidelines limit the use of mifepristone to the first 49 days of pregnancy.

The proposed law could also place significant financial and logistical burdens on women. At roughly $100 for each 200-milligram pill, the FDA’s higher mifepristone dosage is expensive. Moreover, Texas already mandates an ultrasound at least 24 hours before an abortion, so the legislation would actually require four separate trips to the doctor (for the ultrasound, the mifepristone, the misoprostol, and a follow-up visit.)

Texas ob-gyn and abortion provider Dr. Bernard Rosenfeld says the FDA guideline requiring women to take the misoprostol in a clinic was meant to standardize a variable in the trial and that several subsequent studies have shown women can safely take it at home.

Rosenfeld, who has practiced medicine for more than three decades, says the rule goes against “good medical practice” and advises all his patients to take the pills at home.

“There is zero medical basis or benefit to take the pills in the clinic,” he said. “To make a woman come back to the doctor’s office and then find a way to get back home after taking the drug is really just mean and cruel and puts them at medical risk.”

“It’s really just meant to give women a hard time,” he added.

The bill also compels doctors to create a contract with another physician who promises to treat the woman should an emergency arise from the drug. The doctor must have “active admitting, gynecological and surgical privileges at the hospital designated to treat the emergency.” But because some women, especially those in rural areas, may have to travel far to receive an abortion, the hospital in which the admitting doctor works may not be the closest to the woman in the event of a medical emergency.

“Living in a small, rural town can be really problematic for a woman seeking an abortion under these rules,” said Nash. “This part is not well thought out. It does not think through what actual steps will be best for the patient.”

The legislation seeks to penalize doctors who do not follow the requirements. According to the bill, the Texas Medical Board may take disciplinary action, such as revoking a medical license, or assess an administrative penalty, which can mean a fine of up to $5,000 if a doctor fails to comply.

Anti-abortion lawmakers promote the use of outdated FDA rules when it comes to abortion-inducing drugs as a way to stigmatize doctors, says Nash.

“Whenever you invoke the FDA guidelines you are essentially making it wrong to do something that doesn’t abide by them. But in reality, what we are talking about is off-label protocol that is less expensive and has fewer side effects,” she said.

Anti-abortion rights advocates disagree. Dr. Donna Harrison, a pro-life doctor and director of research and public policy at the American Association of Pro-Life Obstetricians and Gynecologists, says the rigorous FDA process should be followed.

“The FDA guidelines are the only real safeguard for the American people,” she said. “So when you go off-label with the drug, you are experimenting on women.”

But doctors in many medical fields routinely prescribe off-label drugs. A 2006 study found that an estimated one-in-five drug prescriptions were off-label.

“Off-label use is pretty much the mainstay of how we use medicine in the U.S.,” says Creinin, pointing to everything from birth control regimens to anxiety medication. “Just because a drug is approved by the FDA doesn’t mean there aren’t better ways to use it after approval. Research continues on the drug and finding new uses and assigning different dosages is normal.”

“The bill is really about trying to make providers look as though they are not following the rules when in fact, [the more recent protocol] is just as safe and effective and actually has additional benefits,” said Nash.

Creinin is skeptical of legislators’ intentions.

“The question here is: why would lawmakers, who say they are looking out for the health and welfare of their constituents, want to legislate that women must follow the label when sufficient medical literature shows the old guidelines are more dangerous and more expensive?” he said. “What they’re really trying to say is that they know more than the doctor – but they really need to be getting out of this business.”

Dr. Lisa Perriera, a fellow with Physicians for Reproductive Choice and Health in Ohio, is familiar with the legislation. She says that after her state passed its own law in 2004 restricting use of mifepristone, she began to see unfortunate consequences. For example, patients have reported back that after receiving their misoprostol dose in the clinic, they begin to experience uncomfortable side effects while driving home from the clinic.

“We have patients that have to travel as far as five hours in a car while the abortion process starts – that’s just not fair,” said Perriera.

Based on her experience, Perriera says the legislation has not deterred her patients from having abortions; it has simply affected how they have them. As a result of the seven-week gestational limit, more of them have switched to surgical abortions.

“Some women want to have abortions naturally, without medical instruments, but this bill would eliminate that option for them,” she said. “Legislating the way women have to take their medicine is taking choices away from them.”

In the end, the rules have made it “more inconvenient for patients and more costly,” said the Ohio physician.

“It is also forces women to undergo more visits for no medical benefit whatsoever,” said Perriera. “So this is really not about their health and safety.”