I was bad Santa

The only time I tried to play St. Nick involved an incontinent basset hound, a bottle of rum and crystal meth 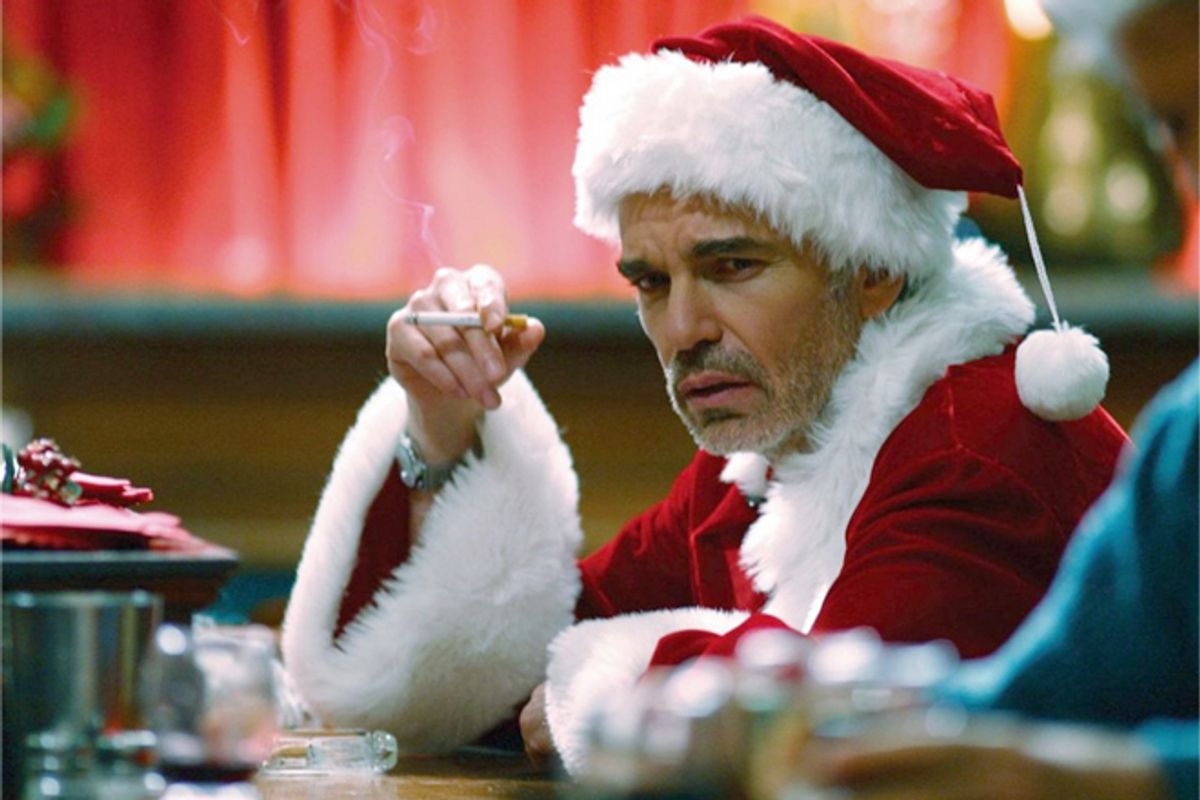 Back in the late '90s, my then-wife, I’ll call her Rachael, and I quit our corporate jobs to open a doggy daycare center. The first Christmas we were open, Rachael decided it would be cute to hold an open house and invite people to bring their dogs in for a picture with Santa.

Rachael looked at me and smiled.

I knew that smile.

We had dumped good-paying gigs to open the kind of business no one had ever heard of. But starting a business and working with animals combined Rachael’s lifelong dreams.  She was convinced that doggy daycare was the next big thing. I did what I usually did. I went along. Besides, once Rachael set her mind to something, there wasn’t much point in resisting her. Especially when she hit you with that smile.

Rachael’s ambition and drive is what had first attracted me to her; those same attributes often made me feel steamrolled, demeaned and resentful. Relationships can be ironic — especially the doomed ones.

Starting a business on a shoestring budget is something everyone should do — once. We worked 12-, 14-hour days getting the place ready to open.

One morning, we were so worn out we could hardly move. We had to finish painting the bathroom before the plumbers showed up the next day. Rachael produced a little baggie of white powder and tossed it on the desk.

The white powder was crystal meth. We called it The Girl.

With The Girl’s assistance, we blasted right through the painting, hardly needed to sleep, had to remind ourselves to eat. That little baggie and the ubiquitous blue Bic-pen cap became an essential tool in getting our business off the ground. Rachael wasn’t worried. She’d been able to manage her cocaine use for years. We made a rule — never at work — then frequently broke it.

The business was an instant success. Maybe we were smart, but we were also lucky. These were the days of dot-coms, full employment and budget surpluses (remember those?).

On the morning of our open house, the Saturday before Christmas, we swung open the gates to a canine Christmas. The compound was festooned in red ribbon and glittery stars that dangled from the ceiling. There were stuffed reindeer and elves. There was a 3-foot-high candy-cane-shaped canister crammed full of homemade dog treats. There were cinnamon-scented tea lights. There was our backdrop, a 6-foot artificial Christmas tree, adorned with tinsel and blinking lights and chew-toy ornaments. There was our friend, a former White House photographer, with her $6,000 state-of-the art digital camera. There was Frank Sinatra’s voice wafting Christmas carols from the stereo we had lugged from home.

And there was me — Santa.

I sat surrounded by dog crates on a folding chair in the center of the main playroom.  My rented Santa outfit was too big around the waist and too tight in the shoulders. The tassel, which dangled down from the cap, kept tickling my ear. The beard itched. The boots were hot.

At noon, Rachael ducked her head into the room. She said, “You look adorable.”

I didn’t feel adorable. But we had it all worked out. Ten-to-15 dogs. It would be over in an hour — hour and a half, tops.

I could do anything for an hour — hour and a half, tops.

And they just kept coming: dachshunds and beagles and wolfhounds and corgis, collies and bloodhounds and boxers and yorkies. Some had come from as far as Atlanta, dressed as elves and reindeer and, yes — even Santa.

Rachael directed the owners to the punch bowl and started a sign-up sheet.

In my most avuncular Santa voice I said, “Merry Christmas, Calvin.”

Calvin backed away. Then he growled. Calvin never growled.

Calvin responded with an impressive stream of projectile diarrhea.

Calvin’s reaction to me in my Santa outfit may have been the most pungent of the day, but not the most extreme. Little lap dogs snarled at me like Cujo. Others were paralyzed by fear and had to be dragged over to me, their paws splayed out and gripping the floor in panic. Some broke into a jittery canter around the perimeter of the room, drooling and not making eye contact. There was lots of vomit. The dogs we managed to cajole into my lap either sat there squirming like they were getting shock therapy, or ducked their trembling heads into my armpits.

We’d figured it would take five minutes per portrait. It was taking 20. The dogs and their owners were stacking up like jets on a busy runway. A cranky energy crept through the place. And I don’t just mean the dogs. Our customers were accustomed to getting their way, to having things go smoothly. One of them said, “How much longer do you think it might be?”

At first, I laughed it all off. Sometime around 2 o’clock, I began to take things personally. Sometime around 3 o’clock, I began to hate. I hated our customers, for their whining and sense of entitlement. I hated Rachael for her manipulative selfishness. I even hated the dogs for turning on me. Most of all, I hated myself for being the kind of guy who always went along, always the nice guy, like a clown — or Santa.

By 3:30, we still had a dozen more dogs to shoot. By 4, Rachael had placed phone calls to arrange two critical deliveries: first to the liquor store for more rum for the punch; second, to our dealer. They arrived at about the same time.

I shuffled over to Rachael in my hot Santa boots and poked her in the shoulder.

She took one look at me and decided not to argue. I slipped the baggie into my giant Santa pocket, grabbed a half-full bottle of rum and headed to the bathroom.

I had begun the day as St. Nick. I emerged from the bathroom as the nightmare before Christmas.

I plunked back down in the chair and surveyed the remaining dogs.

My eyes landed on Oscar, a fat dachshund whose belly dragged the ground when he walked. Oscar’s perpetually depressed owner kept him on a balanced diet of M&Ms and Skittles.  She held him up like an offering. She said, “He’s been waiting so long.”

For the first time in hours I smiled. I said, “Of course.”

Oscar’s owner deposited him in my lap where Oscar settled in, resigned, like an old man in a Barcalounger.

The photographer said, “Finally, an easy one.”

I could blame what I did next on lots of things: the meth, the rum, frustration, fatigue. The truth is as simple as it is inexcusable. I wanted to inflict my pain on something, on anything. With one hand I stroked Oscar’s head. With the other I searched underneath Oscar’s ample belly until I found what I was looking for, a raw spot where it made contact with the ground. Just as the photographer was about to take the picture, I squeezed.

Oscar yelped, leapt off my lap, and landed with a sound like a plucked, wet chicken dropped onto a concrete floor.

My memories of what happened next are disjointed, but distinct: the boxer and the weimaraner that latched on to either end of a stuffed reindeer until they had dismembered it, then paired up to disembowel it before turning on each other; the Labrador that brought down the Christmas tree, then careened around the facility with frenzied eyes and a chew-toy ornament lodged in his jaws; the candy-cane canister that smashed to the ground, scattering a slick of dog treats across the linoleum; the primeval snarls as dogs leapt into the fray; and the shrieks of owners, scampering around after their pets in futile little circles.

I stood by the door to the bathroom, taking it all in. Just a guy wearing an ill-fitting Santa outfit, holding a mostly empty bottle of rum. I was bad Santa, all right. The dogs knew it and so did I. What I didn’t know was that I was on my way to being a lot of other bad things: an addict, a bad husband — a bad person.

That evening, I got myself out of that Santa outfit and, a while later, out of that marriage. Eventually, I stopped hating my life long enough to start living it. I moved to a new city, went back to school, began to write and teach, and met a wonderful woman. These days, dogs like me again, and, on most days, I see their point.

There’s not much of my new life that reminds me of my old one. One thing has stuck, though. Every time I see one of those guys dressed up like Santa at a shopping mall or ringing the bell outside the supermarket, I get a little spike of shame and regret.

I don’t like feeling that way. So, this year I’m going to do something about it. On Christmas morning, I’m going to put on a Santa outfit and surprise my fiancée’s two adorable young boys. I’m going to set them all on my knee and be jolly.

I’m going to be a good Santa, after all.

Sure, there might be some whining and asking for things they didn’t get. No big deal. You know how kids can be, especially at the holidays — a little selfish. Annoying, really. They can get to you.

But it’ll all be over in an hour — hour and a half, tops.

Nicholas Garnett is a teacher and freelance writer who lives in Miami. His memoir, "In the Pink," remains a project in search of a publisher.