Studios used to dub off-key actors with the voices of real singers. Now everyone gets to sing — and it's terrible! 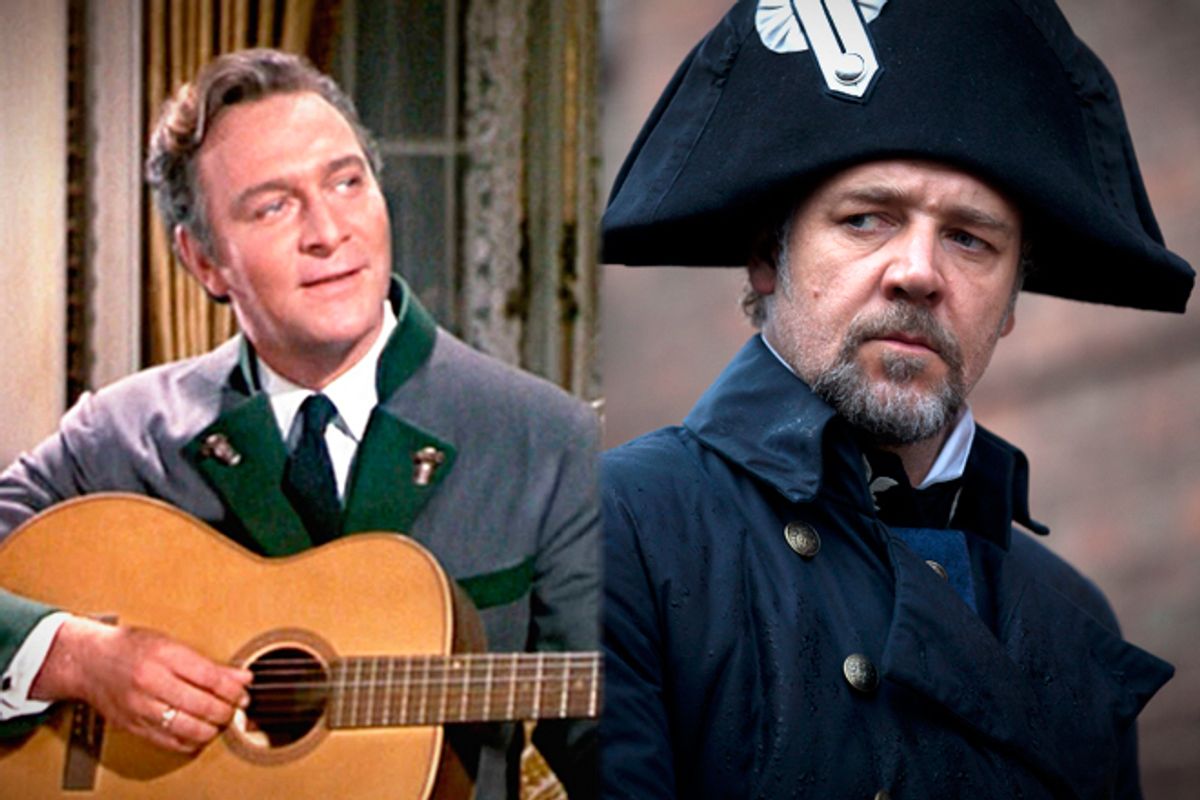 Audrey Hepburn was famously inconsolable when she learned that her songs in "My Fair Lady," which she had practiced and recorded for months, were dubbed over by playback singer extraordinaire Marni Nixon. Hepburn needn’t have taken the dubbing personally, since the ubiquitous Nixon also served as voice double for Natalie Wood in "West Side Story" and Deborah Kerr in "An Affair to Remember."

But if the "Breakfast at Tiffany’s" star had been born several decades later, she wouldn’t have shed a tear, because those same studios that unceremoniously expunged her voice would have begged her to sing as Eliza Doolittle, regardless of her musical merit.

After the unexpected success of 2001’s "Moulin Rouge!" and 2002's "Chicago," a new breed of movie musical was born -- a genre I call the millennial musical -- in which all the songs are performed by musically untrained actors, with scant consideration of vocal caliber. This season's "Les Misérables" not only has its star-studded cast belting out all the tunes themselves, but raised the stakes further by having Hugh Jackman, Anne Hathaway and company sing them live on set, without the benefit of perfect acoustics or endless takes in a recording studio. (The resulting performances are, shall we say, a mixed bag.)

During the golden era of the musical, from the 1930s to the 1960s, studios would never have approved of films and soundtracks with such inconsistent vocals. Of course, there were some stars like Judy Garland and Julie Andrews who could act and sing equally well, but song-dubbing was de rigueur in both live-action musicals and animated films with musical numbers. After all, who cared if Christopher Plummer didn’t sing Captain von Trapp’s “Edelweiss” (the credit goes to Bill Lee), as long as the production looked and sounded great? Fans had every right to buy the soundtrack without the disappointment of discovering after a few listens that the songs they loved were anything less than perfectly delivered.

The three decades between the musical’s classical age and its current incarnation are frequently thought of as a dark age for the genre. The movie musical did endure some growing pains, but overall it prospered and grew, partly by ditching the older styles of staging and song. But it wasn’t the growing influence of pop and rock that endangered the playback singer, but the cult of authenticity that flowered in the late '60s and early '70s. Dubbing came to be seen as a lie and a cheat, paving the way for the domination of double- and triple-threats in Hollywood musicals. Acting singers and singing actors like Olivia Newton-John in "Grease," Dolly Parton in "The Best Little Whorehouse in Texas," and Madonna in "Evita" stepped up to perform double duty.

But ultimately, it wasn’t the cult of authenticity but changing notions about celebrity and camp that had playback performers sing their swan songs. That actors without singing experience are now routinely cast in musicals illustrates how the millennial musical differs from its progenitors. In the last decade or so, since "Chicago"'s Renée Zellweger and Richard Gere were “found out” as capable-enough singers and dancers as well as actors, studios and stars alike have been eager to capitalize on the possibility of an actor being “discovered” as a multi-hyphenate.

The resulting celebrity arms race -- in which stars are not just actors but singers, not just singers but dancers, not just performers but fashion designers and bloggers and lifestyle gurus -- has led to a virtual taboo on dubbed singing, even when it's clear that some actors are conspicuously terrible vocalists. (The New Yorker film critic Anthony Lane memorably compared Pierce Brosnan's singing in "Mamma Mia!" to a belch in his review.) In the same period, animated films have likewise abandoned playback singers in droves, albeit because even Disney has ditched the musical model pioneered by "Snow White and the Seven Dwarves," its first feature film.

The tendency toward multi-hyphenation is also a treat for celebrity gawkers, who get a glimpse behind the curtain, or at least feel like they are doing so, by watching stars in a rawer, less accomplished form. The musical is rarely a realist genre, but an actor’s participation and performance can indicate something “real” about their measure of their own abilities -- that is, their vanity. Hugh Jackman’s turn as Jean Valjean in "Les Misérables" will turn few heads, since the Tony-winning actor has been a staple on Broadway for the last decade. But two weeks before the film’s release, there are already plenty of titters and eye-rolls about Russell Crowe’s supporting role as Inspector Javert.

Crowe has long suffered a reputation for pretension and difficulty, and his confusingly named band 30 Odd Foot of Grunts has never been, well, anyone’s idea of a castle on a cloud. Thus, his musical contribution to one of the world’s most beloved musicals will be received in many circles as more “proof” of the actor’s high self-regard.

Most importantly, the emergence of the millennial musical suggests that audiences watch musicals in a different way than they used to. No longer are exceptional singing, acting and maybe dancing its primary attractions. For those stars who acquit themselves in their new roles as crooners, critics have had to come up with a new category when reviewing their performances: “Not Bad for an Actor, But Not as Good as a Real Singer.” NBABNGRSers include Helena Bonham Carter in "Sweeney Todd," Jim Sturgess in "Across the Universe," and Gwyneth Paltrow in "Country Strong." For the Pierce Brosnans and Russell Crowes of the millennial musical world, imperfect singing may be a source of derision and laughter, but it doesn’t lose its box office allure. In fact, the viewing and listening experience of bad singing will be defended and celebrated as camp and celebrity revelation.

The millennial musical’s influence is now so great that it exceeds the confines of the big screen; its shadow can now be discerned all over network TV, in the less-than-stellar performances by Connie Britton in "Nashville," Uma Thurman in "Smash," and Kate Hudson in "Glee." Soon to arrive at your local ABC affiliate: "Singing with the Stars."