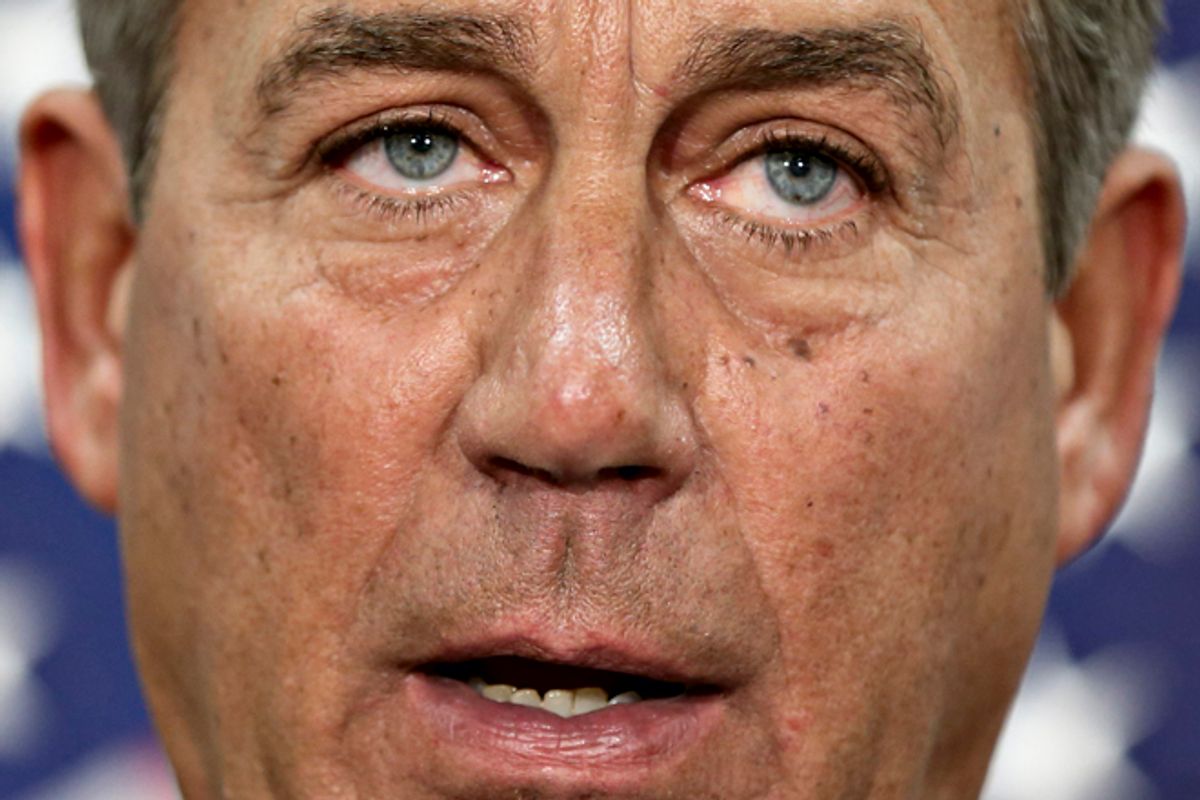 When members of Congress vote next month to determine who shall lead the House, odds are increasingly dim for House Speaker John Boehner's hold on power.

Since the failure of his Plan B proposal for extending the Bush-era tax cuts for all but the riches Americans -- those with an annual income of $1 million or more -- pundits and pols have been raising the spectre of a new speaker of the House come the next Congress. The pundits, for once, appear to be onto something.

At the right-wing Brietbart.com, Matthew Boyle writes of a plan by conservatives to wrest the speaker's gavel from Boehner by changing the rules of the vote to a secret ballot, under the reasoning that, if Boehner was unable to determine who voted against him, he would be unable to visit retribution on those members should his speakership survive the vote.

Although Boyle relies entirely on unnamed sources, he obtained a document laying out the plan, which is currently being circulated among right-wing members of the House. The irony is that they plan to use Boehner's promotion of an anti-union position favored by the Tea Party as the rationale for making the rules change.

In 2009, Boehner published a commentary on the opinion page of U.S. News and World Report to argue against proposed legislation for the Employee Free Choice Act, which would make it easier for workers to unionize their workplaces. At issue for the Republican right is that the bill does not require the use of a secret ballot when workers vote for or against union representation in a currently non-union workplace (although it does allow an opt-in measure for a secret ballot if a majority of workers request it). On the right, the EPCA bill is often referred to as "card check," because a union would automatically win the the right to represent the rank-and-file of a workplace if more than 50 percent of workers simply check "yes" on cards that have traditionally been used only to allow for a secret-ballot election.

Boehner contended, in his 2009 essay, that EPCA's abolishment of a mandatory, automatic secret ballot for workers' votes on whether to unionize would leave those who vote against the union "open to coercion and intimidation."

Coup planners now intend for Boehner to eat those words. In the document posted by Boyle, the anti-Boehner plotters gloat about the cleverness of their scheme. In a bulletted list under the heading, "Benefits," the unnamed author writes:

The Tea Party wing of the Republican caucus in the house -- a minority within the majority party -- is insensed that Boehner took plum committee assignments from four right-wing congressmen, presumably for having voted too often against measures supported by the speaker.

That led Richard Viguerie, a founder of the religious right, to add fuel to today's anti-Boehner fire, writing on his ConservativeHQ Web site:

Whatever the reason or excuse, Boehner has systematically sought to neuter conservatives by excluding them from the inner counsels of the House leadership.

The result is that Boehner’s House leadership team is dangerously out of touch with the principled conservatives in his own House Republican Conference and with the grassroots conservative activists and donors who influence rank and file members of Congress back in their home districts.

Meanwhile, the center-right pundit Norman J. Ornstein, resident scholar at the American Enterprise Institute, is suggesting that members of congress use existing constitutional law to oust Boehner by chosing someone who is not a member of Congress. Writing at the Washington Post op-ed page, Ornstein suggests:

Go to Article I, Section 2: The Constitution does not say that the speaker of the House has to be a member of the House. In fact, the House can choose anybody a majority wants to fill the post.

Ornstein's suggestion? Jon Huntsman, the erstwhile presidential candidate and former U.S. ambassador to China, who he figures could win the votes of enough Democratic members of Congress (Huntsman was appointed to his China post by Obama) and less radical Republicans to win the gavel.

A novel idea, but highly unlikely on today's hyperpartisan landscape.