"Django Unchained" has action, comedy, fake history and oceans of blood -- but it's an endless, undisciplined mess 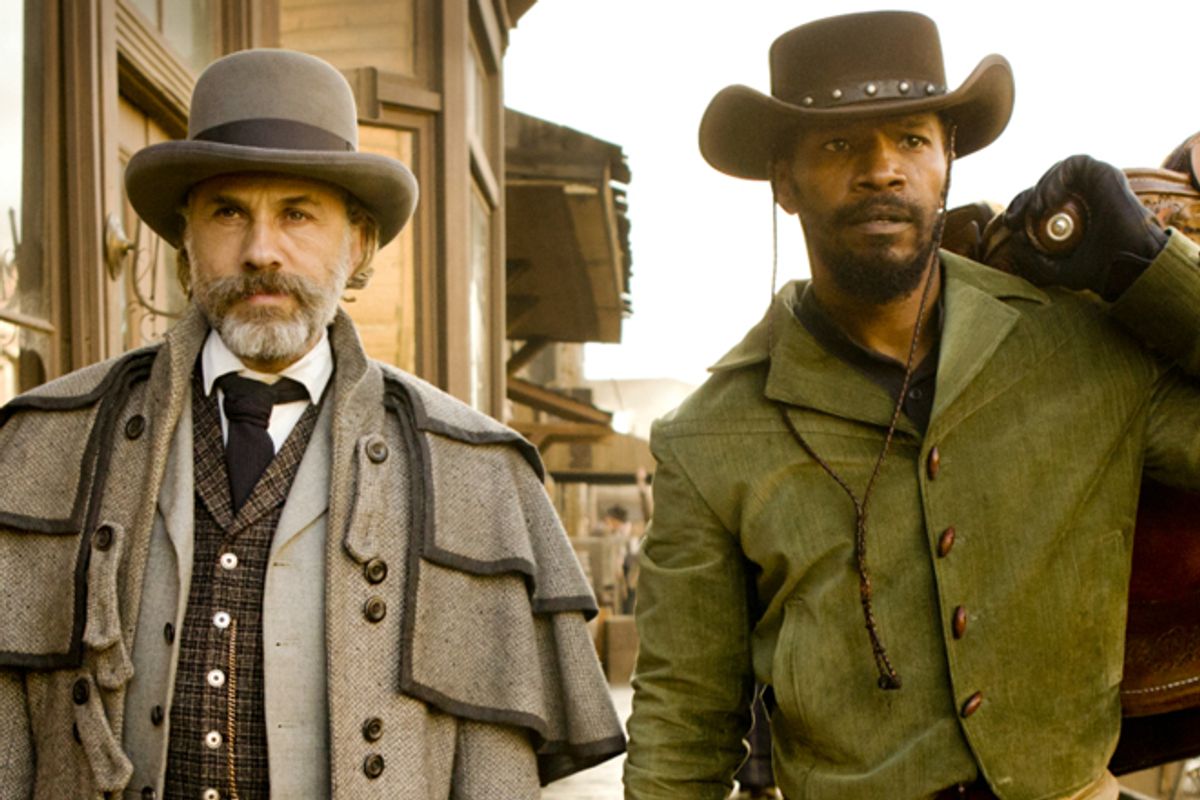 Quentin Tarantino no longer makes movies; he makes trailers. “Django Unchained” feels like a three-hour trailer for a movie that never happens, a slavery-revenge melodrama cum salt-‘n’-pepper action film that would be awesome if it actually existed. Like so many trailers, it’s packed with memorable scenes that don’t go anywhere, and keeps promising payoffs that remain theoretical. It’s got Western scenery on a grand scale and scenes of madcap comedy involving inept members of the Ku Klux Klan. It’s got veritable geysers and fountains and gushers of blood, an ocean of fake gore even by Tarantino’s standards. You could claim that he’s “quoting from Sam Peckinpah” with those slapsticky water balloons full of blood, except that that’s not quite it. It’s more like he’s quoting from crappy ‘70s drive-in movies that were quoting from “The Hills Have Eyes,” which was quoting from something else that was quoting from Peckinpah. (I may be missing an intermediate stage there, such as a cannibal film that was dubbed from Italian into Spanish and projected once, with the reels out of sequence, at a downtown Los Angeles theater in 1983.)

It’s got 783 uses of the word “nigger” in dialogue, which is not merely a new high in Tarantino’s personal anti-P.C. campaign but may also outdo the lifetime output of former Congressman and KKK Grand Wizard David Duke. (OK, I didn’t count. But that’s close enough.) It’s got “Mandingo fighting,” or gladiatorial combat between African-American slaves, which was not something that happened in the real world but definitely happened in a notoriously dreadful 1975 movie starring James Mason, a genuinely great actor who was in lots of garbage but also played the lead in Stanley Kubrick’s “Lolita” and a bad guy in Hitchcock’s “North by Northwest.” (That sentence became increasingly irrelevant but gained velocity; I’m just trying to simulate Quentin Tarantino’s thought process.) It’s got Don Johnson. It’s got black people speaking German. Well, OK, one black person: Kerry Washington, in what could maybe be called the leading female role, does only three things: 1) Standing in a pond, in Jamie Foxx’s imagination, and looking alluring; 2) Lying in a hole in the ground with no clothes on; 3) Speaking German.

She speaks German, of course, to Christoph Waltz, the charismatic Viennese actor who won an Oscar working with Tarantino in “Inglourious Basterds” and may get nominated again this year for playing pretty much the same worldly Kraut charmer, this time as a good guy. Waltz is Dr. King Schultz, a German dentist turned bounty hunter in the pre-Civil War Wild West, who abhors slavery but doesn’t mind murder, and purchases and then frees the eponymous slave Django (Foxx) in order to help him commit more of it. I’m not objecting to any of that on ethical grounds or whatever, but it’s an awfully complicated setup for two characters who never come clearly into focus and a wandering, episodic narrative that takes a long time to get anywhere.

If you’ve seen any of Tarantino’s movies, you don’t need me to explain that he sees the universe in terms of random explosions of ruthless, farcical violence. Schultz and Django eventually turn their attention to hunting down sadistic slavers and slave-owners, where the moral equation seems clear enough. But they spend early portions of the movie wandering all through the West and South collecting the “dead or alive” bounties on wanted men whose guilt or innocence is unproven and unknown. In one scene, they shoot a farmer who’s plowing his field, right in front of his son. I recognize the moral argument that is hypothetically percolating below “Django Unchained”: Tarantino is suggesting that white Americans who benefited from a slave economy were guilty of historical crimes whether or not they personally owned slaves, just as he implied in “Inglourious Basterds” that German soldiers were guilty of atrocities they did not personally commit. But give me a break. In both cases he’s just pretending to raise these so-called questions in order to create the framework for an emotionally arid, ultraviolent action movie whose characters and audience seem to be emotionally stunted adolescent boys. For Tarantino, history is just another movie to strip for parts.

I don’t want to spend much time on Waltz’s loquacious but cool-headed Schultz and Foxx’s stone-faced Django, because they’re actually pretty boring, and once you get the gist – some scenery, a few gentle gags, then they kill a bunch of people – their journey has few surprises. “Django Unchained” comes abruptly to life in the last hour with the outrageous performances of Leonardo DiCaprio and Samuel L. Jackson, as an effete, Francophile plantation owner and the superficially obsequious “house slave” who dominates his domicile. These are powerful, taboo-breaking characters with a perverse but somehow believable relationship redolent of the deep weirdness of race relations in the Old South: DiCaprio’s poncey, Van Dyke-wearing Calvin Candie is actually under the thumb of Jackson’s grinning, jiving Stephen (who looks almost exactly like the guy on the old Cream of Wheat box), but both are hopelessly doomed by the soul-crushing institution of white supremacy.

That fascinating and troubling subplot feels like it ought to be the dramatic center of “Django Unchained” but completely isn’t. It’s maddening to detect traces, amid all this passionless and self-indulgent rambling, of the adventurous storyteller and precise stylist who made “Reservoir Dogs,” “Pulp Fiction” and “Jackie Brown” (a film, by the way, that has much more to say about race as a lived experience in America than this one). Lately Tarantino appears to have drifted into the hipster equivalent of George Lucas-land, where everyone around him agrees with his dumb ideas and nobody dares to observe that the movies are fatally undisciplined and way too long and not really about anything.

I realize I’m supposed to say something about Tarantino’s use of revisionist historical fantasy -- making Jewish warriors the protagonists of World War II and inserting a black action hero into the antebellum South -- but I just don’t think either of the movies is serious enough to make that a worthwhile topic. For the record: The idea behind “Inglourious Basterds” was genuinely subversive, even if the results were ludicrous, but there’s nothing revolutionary or new about depicting a black man as violent, vengeful and monosyllabic. It’s always chancy to agree with Spike Lee about anything, but his recent tweet saying that he didn’t see the story of his slave ancestors as a Sergio Leone movie hit home with me.

Let’s back up for a second and stumble over the meaningless detail that Kerry Washington’s nearly invisible character – the wife forcibly separated from Django, previously slave to a German-speaking master -- is named Broomhilda von Shaft. I mean, OK. But on the other hand, what? It’s just a gag, I guess, and within the movie it’s clear that the character is actually named after Brünnhilde, the valkyrie and shield-maiden of Norse-Germanic legend who must be rescued by the hero Siegfried. But it’s a gag that explains a lot, especially the fact that “Django Unchained” is full of memorable images and ideas but isn’t tethered to any remotely coherent universe, either historical or imaginary, and the related fact that Tarantino is the kind of overamped class clown who can’t help making two different, totally unrelated meta-meta-meta-brain-fart 1970s jokes when he’s giving a name to a character from the 1850s.

There’s unquestionably an audience for the antics of the amped-up class clown, especially when presented with Tarantino’s undoubted cinematic verve, wrapped in a nostalgia for trashy movie genres most of today’s audiences have never seen and served with an overlay of progressive and/or outrageous racial politics. I understand that for many viewers the crazily overstuffed, one-damn-thing-after-another quality of “Django Unchained” will offer a fun alternative to more predictable fare, and have no doubt that some of my fellow critics will proclaim it a postmodern masterpiece, equally inspired by Jean-Luc Godard, the spaghetti western and the screen careers of Jim Brown, Fred “The Hammer” Williamson and whatever other ex-NFL stars of the ‘70s made movies in which they got to kill white people. I love to make those kinds of proclamations! And that combination of ingredients sounds intriguing, in theory – just about enough for a great trailer.