In the wake of Wayne LaPierre's looney press conference, Dick Armey is exposed as a gun-empowered extortionist 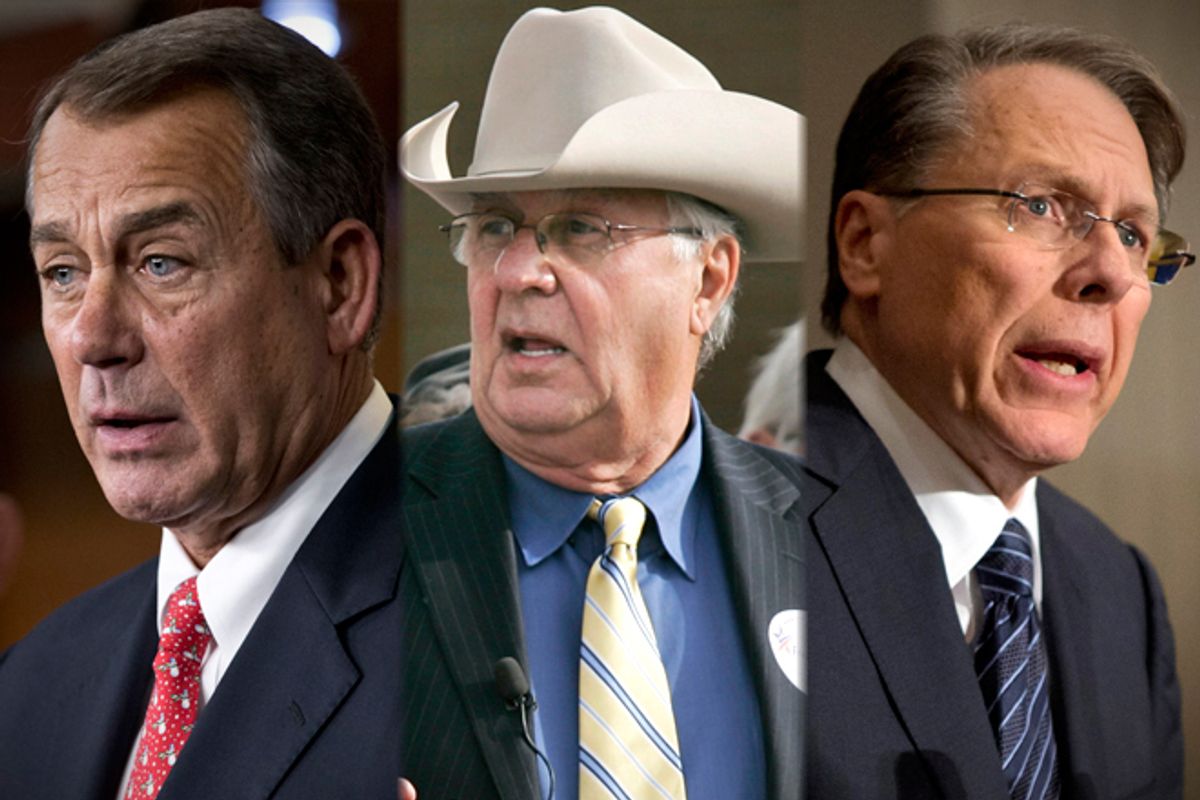 The ugly, funny-if-it-wasn't-scary truth about our right wing overlords keeps emerging as 2012 comes to a close. Last week we learned that House Speaker John Boehner is a pathetic hostage to the Tea Party crazies in his caucus, while the National Rifle Association's Wayne LaPierre shared his delusions at a post-Newtown press conference where he memorably intoned: "The only thing that stops a bad guy with a gun is a good guy with a gun" – ignoring the fact that gun "enthusiast" Nancy Lanza was murdered by her own guns, which then slaughtered 20 first-graders and six educator-heroes, plus her disturbed and ultimately suicidal son Adam.

Then over the weekend we discovered that the late Andrew Breitbart's empire of hate is imploding, and the ridiculous Dana Loesch is trying to use the lifeboat of labor law to flee the ship of bullies she once helmed.

Most recently, on Christmas Day, those of us who loathe Dick Armey received the gift of Amy Gardner's Washington Post expose, which detailed the way he tried to take over FreedomWorks backed by a gun-toting thug, and wound up, defeated, with an $8 million golden parachute. Here's the gist:

[Armey] walked into the group’s Capitol Hill offices with his wife, Susan, and an aide holstering a handgun at his waist. The aim was to seize control of the group and expel Armey’s enemies: The gun-wielding assistant escorted FreedomWorks’ top two employees off the premises, while Armey suspended several others who broke down in sobs at the news.

Yes, the attempted coup took place over Labor Day weekend, but the fact that the factions are continuing to use the media for revenge is just another sign that the forces of backlash unleashed in 2009 are coming undone.

I didn't need Gardner's expose to know Armey is a megalomaniac bully. Only a week into the president's first term, I sampled his style of political reasoning on "Hardball," when in a debate over the role of Rush Limbaugh in his party, he hit me with the infamous zinger, "I am so damn glad that you can never be my wife because I surely wouldn’t have to listen to that prattle from you every day."

Armey's reaction heralded the right's approach to women in this age of backlash politics: We must be defined by our lady parts and our supposed marriagability. At the time, I expressed sympathy for Armey's actual wife, Susan. But it turns out Susan Armey is a full partner in crazy, showing up with him at the FreedomWorks coup and scaring the staff. As one staffer told Gardner: "This was two weeks after there had been a shooting at the Family Research Council, so when a man with a gun who didn’t identify himself to me or other people on staff, and a woman I’d never seen before said there was an announcement, my first gut was, ‘Is FreedomWorks in danger?’ It was bizarre.'"

We also learned that Armey pushed the group to intensify his support for Rep. Todd Akin's Senate challenge to Claire McCaskill even after Akin's crazy "legitimate rape" remarks. Thus the Armey story pulled together the skeins of the right-wing backlash narrative and tied them in a bow, a gift that even Democrats can't miss, I hope.

I started paying attention to the extremist Akin back in 2009, when he applauded Tea Party crazies for turning the traditional August congressional "town halls" into "town hells" for Democrats and reasonable Republicans, who were heckled and intimidated by gun-toting bullies over their real or imagined support for "Obamacare." Akin happened to be Dana Loesch's congressman, and she defended (and joined in) his Tea Party bullying, and even tried to get the GOP to ignore his "legitimate rape" remarks and keep backing his Senate bid. In that same time frame, the NRA's LaPierre teamed up with Glenn Beck to terrify the paranoid that Obama was coming for their guns. (Digression: I would wager a small sum of money -- whatever Mitt's $10,000 would represent to a normal person -- that we will ultimately learn that Nancy Lanza was among the vulnerable inflamed by right-wing apocalypse peddlers like LaPierre and Beck.)

Now Armey, LaPierre and Loesch are being exposed as the lunatic-enabling grifters that they are.  The modest course-correction represented by the election of Barack Obama, corporate centrist -- albeit a black corporate centrist – unleashed the hounds of hate, who were used by said grifters to impede the country's progress for four years. Now, as the haters begin to turn on one another, maybe the rest of us can try to get something done, on issues ranging from gun control to the so-called "fiscal cliff" to income inequality. You can't negotiate with gun-empowered extortionists; you have to stand up to them.