A theater experiments with letting the audience keep its phones on 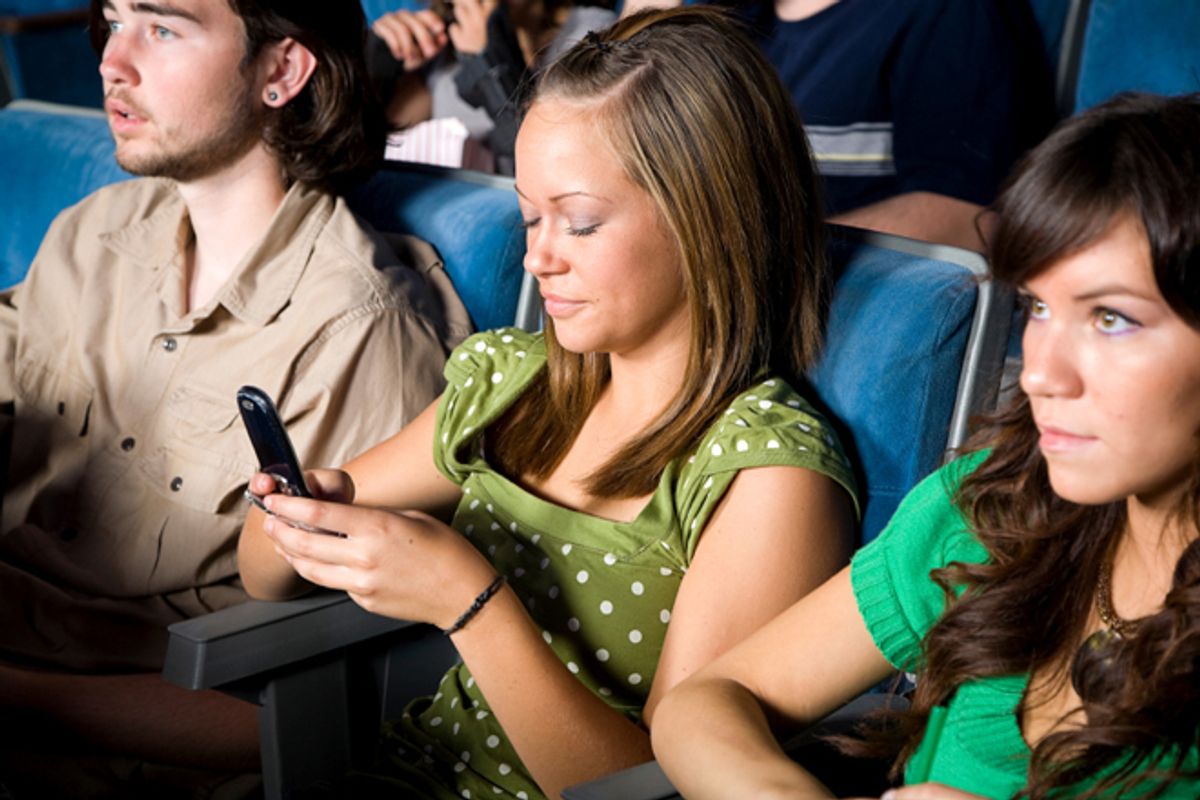 In a world where no meal can go un-Instagrammed, no departure from a plane unremarked upon with the phrase "wheels down" and no status un-updated, when the houselights go down, does an entertainment venue beat 'em or join 'em?

On Thursday, the Minneapolis Guthrie Theater is launching its first experiment in offering balcony-level Tweet Seats, "allowing social media users an opportunity to interact" during its production of "The Servant of Two Masters." Guthrie External Relations Director Trish Santini explains, "This cast is an incredible ensemble of comedians, and night after night they're riffing and improvising  — it's the kind of show that makes you ask, 'Did they just say that?' Usually they did — and tweeting should be a great way to talk about it."

"Should" being the operative word. As Jezebel's Laura Beck ponders, the move will either "encourage friends and families to check out fresh-ass local theater," or "just lead to people compulsively checking Facebook and Instagramming the backs of people's heads." Because while you can invite the audience to participate in "an opportunity to interact" in the hopes of creating buzz, there's zero guarantee it won't instead just idly play Temple Run instead.

It's been a few years since I first attended an event — a reading with several short story writers on the bill – in which the moderator didn't open by asking the audience to silence all cell phones and electronic devices. Instead, he implored us to keep our phones out, and directed us what hashtag to use when tweeting about the evening's proceedings. At the time, I felt mildly resentful -- not at the idea of people tweeting, but the new expectation that I as an audience member was somehow now supposed to work for the event organizers as a promoter. Since then, that kind of invitation has become more and more the standard at live events — an acknowledgement that audiences now routinely expect to share about events as they're unfolding, and connect with other people who are doing the same. We watch presidential debates and season finales, phone in hand, recapping in real time. Why shouldn't we do the same when we're collectively enjoying a live show?

Yet the protocols around basic courteous behavior in public – and the expectations of what that is – are wildly inconsistent. You assume people will be snapping away on their iPhones during a crowded, sweaty concert, but you don't necessary want the guy next to you doing the same during the final act of "Death of a Salesman." At a lecture, with the lights up and the conversation volleying between the front and the back of the room, the Twitter element makes sense. But in an environment where the lights are dimmed and the audience focus is all supposedly turned toward the stage, the glow of a neighbor's screen can be a massive irritant. Why else would Texas's Alamo Drafthouse have found itself with a viral hit on its hands last year when it posted the irate voicemail of a patron who was kicked out for texting during a show, along with the message, "Thanks for not coming back to the Alamo, texter!"? The chain has developed such a loyal following for, among its other alluring qualities, its strict enforcement of its rules about talking and texting that it's set to open a new location in New York in 2013.

The question of what's appropriate social behavior has existed long before everybody got a Twitter account. We invite friends over to yell at the screen during the Super Bowl and the Oscars, but assume it's rude to do the same at the movies. We chat amiably with a seatmate on the train, but move into the Quiet Car to avoid the guy bellowing office gossip into his phone. We love the bar that always has the TV on. We hate the bar that has the TV on. And in a public sphere, one person's audience participation is another's annoying distraction.

That's why the Guthrie Theater's experiment, whether it succeeds or fails, is at least being intelligently carried out. Tweeters to the back, turned-off devices in the front. It's just about figuring out how to coexist, at a level of participation — and illumination — that works for most of us.