I wore heavy makeup. I bleached my skin. But I never could cover them up, and eventually, I stopped trying 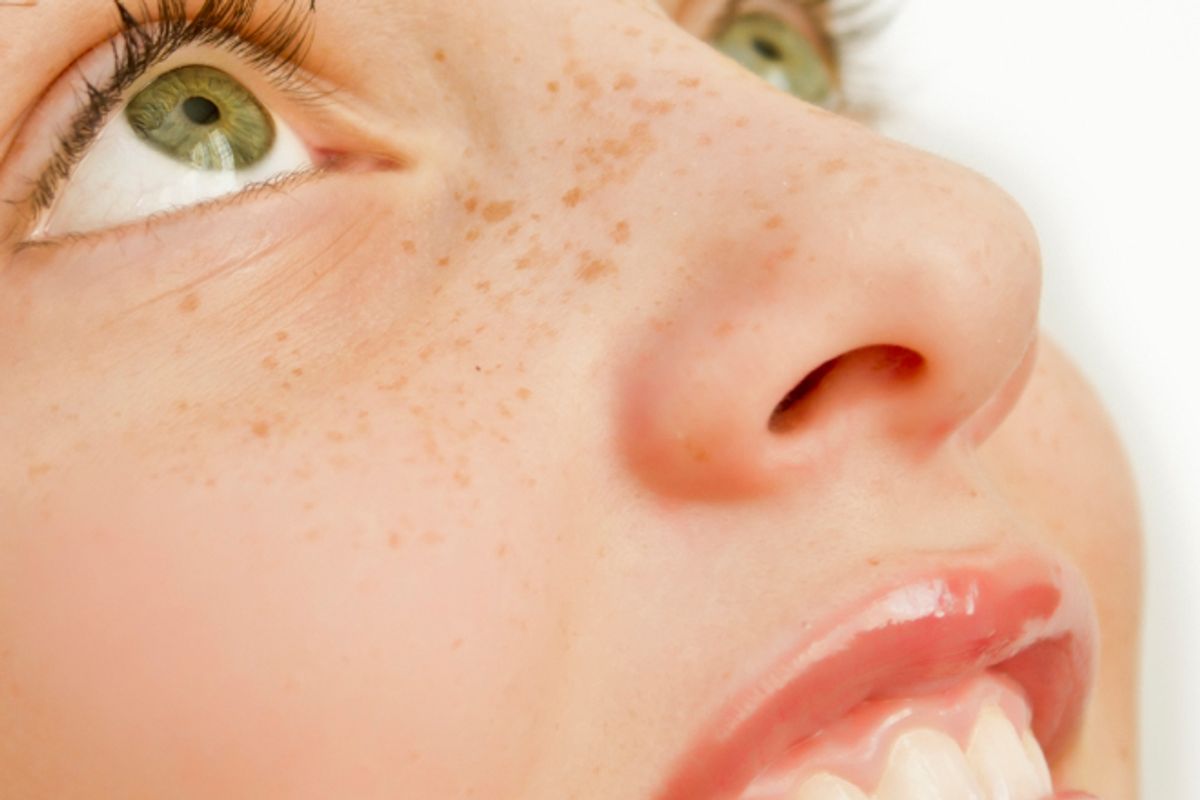 "Body Issues" is a personal essay series about obsessions with our own shape.

Where I grew up, in mid-coast Maine, the primary industry is lobster fishing. Although I can now recognize my hometown as an oasis of beauty and tradition, as a kid I was terrified of the lobstermen and their stories and slang. They smelled of bait and had thick Maine accents I couldn’t understand.

One day a grizzled lobsterman, still in hip waders, came toward me down the stone steps of King Ro Market, our village’s general store, which kept an enormous block of hard cheese on the counter, to be sold by the slice, as well as motor oil, Wonder Bread, and my objective whenever I escaped the carob and kale of my childhood home: Swedish fish and other penny candy.

“Jesus Christ,” the lobsterman said, laughing with genuine amusement as I tried to sneak by. “What’d a seagull shit on your face?”

I froze, absolutely paralyzed, as only humiliation can render us. Still shaking his head at his own wit, he climbed into his truck and drove away. Meanwhile, I buried his words deep in my shame pit, one of the first items to ever lodge there.

This lobsterman certainly wasn’t the only person to make fun of my freckles, just the cruelest. Soon after, I was out at a store with my mom, lost in some little girl reverie, as I often was, when several older kids rounded a corner and stopped short.

“She’s got so many freckles,” one girl whispered in the shocked tone I might have expected if I’d had horns or a tail. The others nodded and snickered.

What they said was true. And because there was no denying the accuracy of their vision, it was hard not to also trust their negative assessment of my freckles. The moment probably sounds innocent enough, and looking back, I can see that it was. But after enough interactions like this throughout my childhood, I learned to do that thing where we identify the flaw in ourselves before anyone else can; if I judged my freckles first, and more harshly, then no one else’s judgment could touch me.

Finally, when I was ten, an ambassador to my lonely freckle island: Molly Ringwald. There it was, right in the opening sequence of “Pretty in Pink,” as she put in earrings, applied mascara, colored her lips: freckles. Lots of them. The weekend the film opened in nearby Damariscotta, I saw it both Friday and Saturday night. I couldn’t believe it: Girls wanted to be her, guys desired her, and she had freckles.

I did have one other source of hope. My beautiful mother had outgrown the freckles on her face. I thought I might too. Many people do. For years, I expected to go to the mirror one morning and find my freckles gone. But it was not meant to be.

At 13, I discovered the perfect expression of every dark insecurity within my overly busy brain and deeply romantic heart: The Cure. Through them, I found my people: Goths. I loved their black pointy shoes with the endless silver buckles. I loved their Miss Havisham-esque black lace ensembles. I loved the way they forced the world to deal with their anger, sadness, alienation and deep passion for Halloween. They were different. I wanted to be different.

I especially loved the one thing I could absolutely never have: their flawless alabaster skin. I began wearing heavy face makeup and white talcum powder. I applied numerous skin bleaches. I drank white vinegar, enjoying the harsh taste like a penitent who feels her absolution should be painful. I wore long-sleeved shirts and long skirts, even in hottest summer, and did not go in the sun. For 10 years.

None of it worked. When I wore my dramatic makeup, at least I felt like people noticed me for a reason within my control. But I was at a standoff with my freckles. The makeup was a nightmare — messy and time-consuming — and I finally dialed it back to a more reasonable routine, but one still intended to mask.

Luckily, there is a finite amount of energy we can devote to most obsessions. In college, I started drinking, which sometimes made me feel pretty, witty and unique, no matter how uncomfortable I was with my freckles and other imperfections. Still, I never left the house without makeup. And at the start of new relationships, I'd even put on face powder in the morning while my guy slept.

When I was 20, I was actively pursued by a man who not only liked me in spite of my freckles; he actually liked me because of my freckles. He confessed that his mom had a thing for freckles (i.e., his dad), and he’d inherited it from her. He pointed to his longstanding crush on his female roommate, a very cute, freckled skateboarder. He made for a lovely boyfriend, and five-and-half years of his freckle worship was a healthy dose of antivenom for me. But the relationship didn’t last, and breakups aren’t historically great for one’s self-esteem.

I moved to Boston, where the dense concentration of Irish men guaranteed I couldn’t step into most neighborhood bars without receiving a freckle-based pickup line. The best? “A face without freckles is like a night sky without stars.”

But I was still getting called out for being different, even if it was the more normal way of adult socializing: photographers asking for pictures, girls confessing they’d wanted freckles so much they’d once painted them on, nerved-up boys blurting out, “I love your freckles,” and then running away.

Having freckles is a bit like being pregnant: a condition of such interest to random strangers, they feel completely justified in ignoring normal rules of social engagement in order to share in the experience of having them. It was as if I’d been visibly pregnant and having my belly rubbed by total strangers for nearly three decades, with no final release of childbirth on the horizon, and I wanted it to stop.

The only other analogy I can think of is when I’ve seen very tall men and women, or very short men, squirm under jokes or friendly comments about their height. Of course they would probably say I’ve got it easy. Their stature is obvious, undeniable. And during the time I’ve worked on this essay, several long-term friends have told me they’ve never noticed my freckles and had to look at photos to picture me with them. Which made me feel even more self-obsessed and vain for caring about them in the first place. But my shame pit was dug long ago in my childhood, and as much good work as I’ve done to build something better on the site, I don’t know that what has existed within me for so long can ever be expunged completely.

Six years ago I moved to Los Angeles, and, perversely, living in a place where women really are that skinny, and really do look that good, set me free. There was no point in competing. At first figuratively, and then literally, I became a bit more comfortable in my skin. Still, any time I see a model or actress or meet an attractive woman with freckles I can’t help but make a small mental checkmark on the internal tally board of my freckled soul. It’s beginning to look like I always will.

And then it hit me: For years, I was desperate to be different, to be unique, to be special. I was a slave to every obvious counterculture fashion and makeup cliché in order to feel so. Meanwhile, I spent thousands of dollars and hours trying to look distinctive by covering up the one thing about my appearance that actually is.